Is the trucking industry engaging in autonomous trucks doublespeak in that it claims to need professional truck drivers while simultaneously developing technology to replace them? 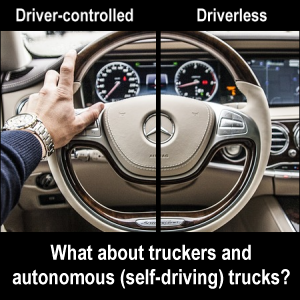 If a truck is truly autonomous, then why did the first “self-driving Class 8 truck” have a full sleeper berth area and driver’s seat?

Why has at least one article been written about how professional truck drivers in these vehicles can do other things behind the steering wheel?

On August 28, 2015, we asked through our Facebook page these questions in response to an article — about how the path will be “smooth” and the “human element” will be important regarding autonomous trucks:

If the ‘human element’ is going to be important in the use of ‘autonomous trucks’:

There are numerous legal implications for drivers of “driverless trucks” or “self-driving trucks”.

We’re sure there are many other issues that will need to be worked out.

For example, by how much will “vehicle to vehicle” (or V2V) technology have to improve before autonomous trucks are completely reliable?