Let us examine some aspects of truck driving jobs and truck driver jobs and then the future of the industry. 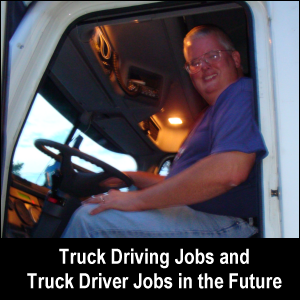 As it can be very costly to take a job that is not what you expected with a company that is not a good match for you.

For that reason, we will provide you with some information so that you can make a wise decision.

Truck Driving Jobs: The Need and the Turnover

On October 22, 2013, the American Trucking Associations published a news release that said, in part, “The industry needs to find an average of roughly 96,000 new drivers annually to keep pace with demand. If freight demand grows as it is projected to, the driver shortage could balloon to nearly 240,000 drivers by 2022, according to ATA data.” 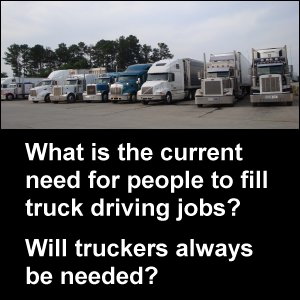 In mid-June, the ATA reported that turnover rates for truckload drivers part of large fleets resumed its pattern of heading up in the first quarter of this year.

This decline marked the fifth time in the last six quarters driver turnover has risen, with the rate declining during the fourth quarter of 2011, which was preceded by four consecutive quarterly declines. ATA officials said that the turnover rate for large truckload fleets moved up 2 percentage points to 90 percent for its highest level since the first quarter of 2008. And the turnover rate for smaller fleets-with less than $30 million in revenue-moved up much higher during the quarter with a 16 percent gain to 71 percent, which was its highest level since the second quarter of 2008.

The Effect of the Cost of Diesel on Truck Driver Jobs

What impact did the huge spike in the cost of diesel — the fuel required to run the trucks driven by those with truck driver jobs — have on the trucking industry in 2008? (Update: we are aware that some fleets are now being converted to run on natural gas.)

A June 13, 2008, article from a major newspaper in South Carolina (our home state) cited the at-that-time soaring diesel fuel costs as one reason why “hundreds of small to mid-sized trucking outfits are folding — leaving legions of trained drivers looking for work.”(1)

The author further stated that thousands of the nation’s 18-wheelers were off the road due to increased price competition among trucking companies.

“During the first three months of this year, 935 trucking companies filed for bankruptcy, according to Avondale Partners research. That’s the highest failure rate seen since the economic slump of the early 2000s, Broughton said.”

(Donald Broughton is a Senior Research Analyst and Managing Director covering Industrials and Transportation at the investment firm Avondale Partners.(2)) “Broughton estimates that more than 42,000 long-haul trucks — roughly 2 percent of the nation’s fleet of about 2 million — were idled during the quarter.”

“National Truck Driver Appreciation Week is when America takes the time to honor all professional truck drivers for their hard work and commitment in tackling one of our economy’s most demanding and important jobs. These 3.1 million professional men and women not only deliver our goods safely, securely and on time, they also keep our highways safe. The log close to 398 billion miles each year and in 2012 delivered 68.5 percent of the U.S. freight tonnage – or over 9.4 billion tons of freight.” 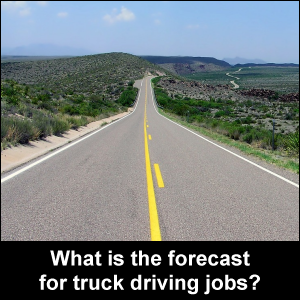 The United States Department of Labor publishes an Occupational Outlook Handbook (OOH) every two years that includes information about the nature of the work, training, employment, earnings and job outlook for hundreds of different occupations.

Employment of delivery truck drivers and driver/sales workers is projected to grow 5 percent from 2012 to 2022, slower than the average for all occupations. Improved routing through GPS technology can make existing truck drivers more productive, which may limit the demand for additional drivers.

For “Heavy and Tractor-trailer Truck Drivers”:

Employment of heavy and tractor-trailer truck drivers is projected to grow 11 percent from 2012 to 2022, about as fast as the average of all occupations. As the economy grows, the demand for goods will increase, and more truck drivers will be needed to keep supply chains moving.

On December 13, 2013, an InvestingDaily.com writer wrote,

The transport sector has long been seen as a barometer for the broader economy. …

According to the 2013 U.S. Freight Transportation Forecast, compiled by the American Trucking Association, the trucking business is in for a period of significant long-term growth.
prnewswire.com/news-releases/ata-releases-latest-freight-forecast-projecting-strong-trucking-growth-213126601/ (no longer online)

Meanwhile, the U.S. Department of Transportation predicts that trucks will carry 36.6% of the country’s freight by 2020, up from 33% in 2001. That’s the biggest gain during this period among all freight-transportation options.

Our Observation about Truck Driving Jobs 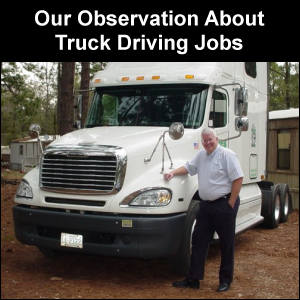 The economic downturn that we started to feel in 2008 affected Mike’s weekly miles as an OTR driver.

Before Mike left regional truck driving and took a local truck driving job, we observed that it used to be easy to find parking at truck stops on Friday and Saturday nights but that it had not been the case for quite a number of months.

We think this may have been due to other drivers working through weekends just to keep their truck driving jobs.

Although the economic downturn has greatly affected the transportation industry, we anticipate that the volume of freight will increase at least modestly in the USA in the coming months.

We believe that there may be a paradigm shift coming to the trucking industry.

CSA (formerly “CSA 2010”) will disqualify some drivers from driving professionally, effectively forcing them to retire.

Furthermore, drivers’ Hours of Service have been cut.

There may potentially be a move toward a different kind of pay system.

Although we are not professional prognosticators, we envision that instead of being paid strictly by the mile, there may be a move toward professional truck drivers being paid by some other performance measures, perhaps a combination of them.

We also think that there may be many more local truck driving jobs spring up with many more repowered loads.

Our Conclusion on Truck Driving Jobs and Truck Driver Jobs 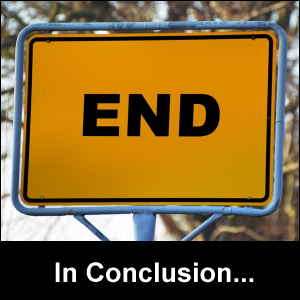 When using money saving tips, we have found that having truck driving jobs can be profitable.

During the economic downturn, some drivers have had to cut their profit margins and become more competitive with their rates.

The variety of truck driver jobs depends on many factors, including the weight of your truck.

If you are thinking about entering the industry where there are truck driving jobs and truck driver jobs, you will first need to get training.

Also, you will want to read a list of questions to ask recruiters for trucking companies about their specific jobs.

We address the mutual expectations that truck driver trainers and driver trainees should share with each other.

We provided a guide for those who are thinking about becoming team drivers.

If you’re thinking of filling out one of those quickie multi-company truck driver applications online, beware of these warning signs.

We also provide information about how to find a local truck driving job.

If you’re already employed in the trucking industry, explore our website to learn money saving tips to keep more of your hard earned paycheck in your pocket.

You should know that your driver manager is the key to your paycheck. Oh, and here’s a list of some things not to do so you won’t have a job loss or get fired.

Money saving tip: Before you attempt to get a truck driving job or training for such a job, make sure that you know:

It helps to know some trucking terms, which we have provided in our glossary.

Don’t waste your time, effort or money on training or a job that you’re not well suited for. You may want to read our page on how to become a truck driver, on which we provide an overview of the job and requirements.

Be on your guard against hiring on with a trucking company that has a reputation for exploiting its drivers.

As we know from having an account on Twitter, there are a number of firms that tweet truck driving job openings all across the USA. Following these free job posting links may or may not be free; be aware of all costs — even in fine print — before you proceed.

The TruckersReport Ultimate Industry Guide provides a breakdown of Average Trucking Salaries By State, National Average Salaries by Specialty and Break Down of Best States for Truck Driver Earnings.

The TruckersReport Ultimate Industry Guide for
2011 provides a breakdown of Average Trucking Salaries By State, National Average Salaries by Specialty and Break Down of Best States for Truck Driver Earnings.