The most difficult trucking maneuver for many to master is how to back up safely. 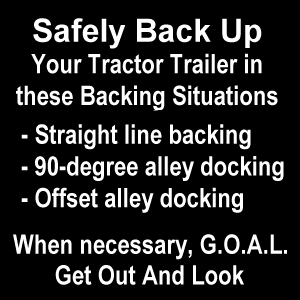 There are several backing situations which professional truck drivers encounter frequently, which Vicki shows through animated graphics below.

All backing and docking situations that drivers of dry vans and refrigerated vans encounter involve the movement of the truck and trailer in which a driver has the vehicle in reverse gear.

Because of the dimensions of the vehicle and the driver’s inability to see the far end of the trailer from his or her seat (unless he or she has a back-up truck cam), the driver may be more prone to being involved in a backing accident.

So we’ll cover these maneuvers from the simplest to most complex.

This is the easiest of all backing scenarios. However, they can present challenges, especially if you have to back up through a hole or standing water or if the dock is dark.

When you draw near to the dock, make sure that you don’t ram it. Also, beware of running into projections protruding from the walls on either side of certain docks. In some cases, you can do a lot of damage to the doors on your trailer if you hit them.

If you can, avoid situations in which you back up over long distances. Get as close to your destination as possible.

Remember the instruction you had in truck driver training school and how to pass your CDL road test.

This maneuver is the one that Vicki had the most difficulty mastering in truck driver training school. The difficulty involves the fact that the vehicle has a hinge — the kingpin — where the tractor and trailer connect. Being an articulated vehicle:

Drivers encounter this situation not only at shippers and receivers, but also in many truck stops.

The illustrated image below does not take into account situations where

The most difficult of all 90-degree alley docking situations is on the “blind side,” where the driver has to back around to the right instead of the usual left.

It is sort of like the combination of straight line backing and the 90-degree alley dock.

We have not encountered this docking situation very often. When we have, it has most often been at shopping malls.

The most difficult offset alley docking situation we ever encountered was when we had to back a 53-foot trailer with a conventional tractor into a space designed to be navigated by a daycab pulling a pup trailer (a short vehicle, not one 70 feet long!).

Docking and Parking Situations We Have Encountered

Mike says that with a heavy load, if you are backing slowly and you hit something, chances are you may never feel it. So be careful.

Money saving tip: Backing accidents are preventable. The key to successful backing is knowing where your vehicle is in proximity to other objects at all times.

If you are required to back up your truck and you can’t see well, follow the tried and true adage to “Get Out and Look” (GOAL). Even if you have to get out of and back into your truck a dozen times to make sure your truck is safe, then do it.

Among the most aggravating things that can happen to a driver — although it is also expensive — is when he is parked (in a brand new truck, no less) and another truck backs into his rig. Mike knows because it happened to him during the time he drove for Schneider.

He had parked in the center of his space at a truck stop — all the way back in the space — under a light pole. He was lying down about ready to go to sleep (in his bright orange truck) when he felt the truck rocking. He jumped up and parted the curtains in time to see the driver pull off.

Fortunately, the experienced driver (who had just signed on with his company) came back and admitted that he thought he’d backed into Mike’s truck. Mike discovered after the fact that there were other drivers on the ground trying to warn the driver that he was about to engage himself in a backing accident. What was worse was that there were plenty of other available spaces at the time!

Besides paying for the damage done to both of the vehicles, the driver now had a preventable accident on his hands. Because Mike was a company driver, he never saw any of the insurance claims to find out how much the damage cost to repair. However, he took an entire roll of film of photos on a disposable camera to document what the company needed.

With the advent of CSA, drivers will want to be especially careful about backing incidents and accidents. Each one may contribute to a number of losses, including potential loss of employment with a trucking company.

Remember to back up “slow and easy.” Don’t be in a hurry. You don’t want to hit anybody or anything, as the results can be disastrous in more ways than one.

There have been times when workers have been crushed between a truck and a dock because the driver chose to back up without knowing who or what was behind his trailer. Sometimes these backing accidents are fatal.

Be especially careful when backing late at night and you’re tired. It’s not worth the embarrassment, loss of your good reputation and safe driving record, and loss of your hard-earned money (potentially including your safety bonus).

Return from Safely Back Up Your Tractor Trailer; Truck Backing Situations to our Truck Operations page or our Truck Drivers Money Saving Tips home page.

Do It Yourself (DIY) Tasks That Truckers Can Do Themselves