Truckers are not super-human. We need to get out and look at what’s around our trucks from time to time during backing situations.

Backing up a truck is one of the most dangerous — and potentially expensive — maneuvers that truckers can do. 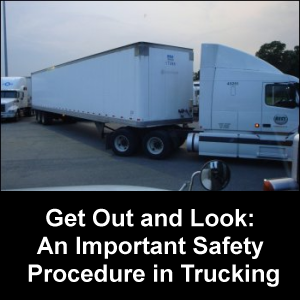 On this page, we will address various aspects of the “getting out and looking” safety procedure and why it’s important.

When It’s a Great Idea to Get Out to Look

The situation pictured here is the one that we described on our back up page as follows:

“It is the wise driver who knows when a situation is beyond his ability to negotiate. Mike was once attempting to park in a tight Pilot truck stop, around a truck whose driver had not backed up as far in his spot as he could have. Mike tried over and over again to get in but could not make it. He eventually pulled out, made a U-turn and parked in a spot directly across from the original spot.”

“Only after Mike had parked in the second spot did Vicki become aware that the driver of the truck that Mike had tried to back around was in his truck! When another driver attempted to back into the same space that we had just abandoned, he decided to back up his truck a little farther in his space! We wondered as to why he moved his truck for the other driver but not for us. But we said nothing.” 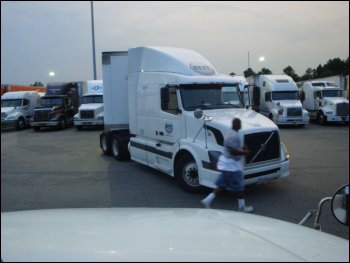 Vicki took the photos at left to capture the backing scenario.

In the second photo, you can see the trucker coming back around the front of his truck. He considered it important to get out and look at the right rear of his trailer. Smart trucker! 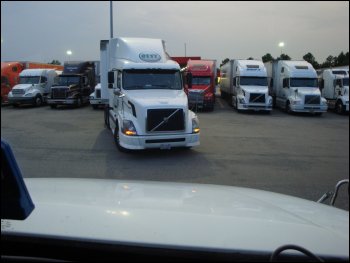 As you probably know, it is also important to look around your vehicle when it is dark or visibility is hindered.

This illustration (although perhaps not to scale) reveals why it is important to “Get Out and Look”.

We have attempted to depict an overhead view of a semi being backed into a parking space in a typical truck stop (like the photos above show from the ground).

It may be a bit tricky to see the right front bumper on the tractor.

There are such things as “bumper guides” or “marker lights” but physically leaving the driver’s seat to get out and look around your truck is always best.

The driver must do one of three things:

In many places, truckers do not offer assistance to others.

This may not be because of unfriendliness but rather an unwillingness to be liable in case the trucker driving the truck hits something anyway.

Through the years, we have made it a practice when backing our rigs into parking spaces never to have the CB radio turned on.

Vicki once talked with a trucker who accidentally backed into another truck on his right rear side because he didn’t “get out and look.”

It was a totally preventable accident.

But what was even more tragic is that the guy whose truck got hit was in his truck watching the rear of the trailer slowly backing into his tractor!

The trucker in the struck truck said he was yelling on the CB at the trucker doing the backing.

It should have been obvious when the trucker doing the backing didn’t respond on the CB that he didn’t have it on.

It would have made better sense if the trucker who was already parked had blown his horn. Live and learn.

Personal Experience With Being Backed Into

Once when Mike was driving for Schneider — in one of those bright orange trucks! — he had parked for the night right next to a light in a truck stop.

He was already in his bunk when he felt his truck “shake.”

He roused in time to look out the sleeper berth curtain to see another truck drive away! His truck had been struck!

The other driver simply didn’t take the time to get out and look.

Fortunately, the driver came back and confessed that he thought he’d hit Mike’s truck.

Mike had already gotten dressed and gone outside to assess the damage.

In this photo, you can see the trucker who took the time to get out and look at the angle and proximity of his commercial motor vehicle to other trucks during his attempted “blind side backing” into a truck parking space at a truck stop.

As we recall, this trucker performed the “get out and look” procedure several times before he actually backed into the hole.

At this particular truck stop at that particular time, there was no traffic waiting to get around him, so he could take the time he needed to do the job.

Reminding Truckers of the Need

This is a close-up of the top of a driver’s side mirror on a commercial motor vehicle that reads “G.O.A.L. GET OUT AND LOOK” (capitalization preserved).

It is good advice when space is tight or one simply can’t see a potential strike point.

Could This Damage Have Been Prevented?

We don’t know what action preceded the following types of semi tractor trailer damage but we suspect that both could have been avoided if the trucker had simply followed a “get out and look” safety procedure.

This damage was done to a truck tractor on the passenger side air fairing near the roof.

This damage shown in this photo at left was done to the passenger side nose of a trailer. 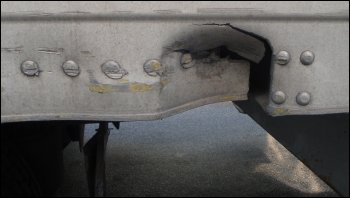 The photo at right shows trailer damage that appears to have resulted from the truck striking a concrete post at an angle.

You may not be able to see it well, but observe if you can at the bottom of the photo from left to right:

In other words, this trailer damage took place on the driver’s side of the trailer!

Just because a stationary object is on the driver’s side of the truck does not mean that he/she will see it from the driver’s seat.

A convex (“fisheye”) mirror can help in cases like this, but will not work if the trucker isn’t looking at it or can’t see everything by looking at it.

This area of the trailer is most likely in one of those “No Zone” blind spot areas.

Money saving tip: Truckers need to be prudent about the amount of time it takes them to back into parking spaces.

They should never feel rushed or intimidated to “go faster” when a potential collision could take place.

If you are a trucker seeing someone having difficulties backing into a space (even at a dock), it is polite to offer assistance.

If you are being delayed as a result of someone having trouble backing into a spot, please exercise patience; the person may be new to trucking and all of us were “newbies” at some point.

Getting out of one’s seat to look at the distance of his/her truck in proximity to stationary objects (be they trucks, walls, concrete posts, protrusions from docks, etc.) is always wise and in your best interests.

It may take a few minutes each time, but consider the potential of “hours” being delayed due to an accident or the “hours” that you will have to work to make up for the financial outlay.

Watch your truck mirrors but do not rely upon them exclusively.

Be aware of the “No Zone” areas around your truck.

If after multiple attempts to get in a space you find that you can’t get in, recognize that the smart thing to do is to go look for another space.

This will save you frustration and the likelihood of being involved in a preventable accident.

Return from Get Out and Look: An Important Safety Procedure in Trucking to our Truck Operations page or our Truck Drivers Money Saving Tips home page.

Money Down the Drain During CVSA Brake Inspection

Moving the Fifth Wheel on Your 18-Wheel Tractor Trailer