Truckers on the road can be at a disadvantage when it comes to bank issues. 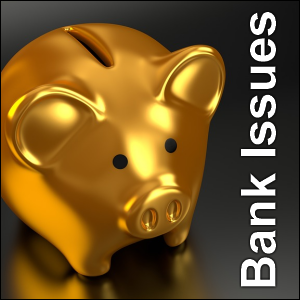 That’s where having a home support team member whom the driver trusts can come in really handy.

The matter of “unavailable funds” refers to not having funds that you thought were in your bank account available to you.

This is different from “insufficient funds”, when one is overdrawn on one’s bank account.

A similar issue is not being able to use what you thought was an open line of credit. We previously challenged hard-core credit card users to use “no credit cards” for 30 days, especially if they have become “credit card dependent.”

One reason for this became apparent in April 2012, when the Visa network was down for about 45 minutes. If this situation happened to one credit network for this length of time, it is possible that it could happen for longer periods of time or to more credit networks.

Many people around the world have become so accustomed to using credit and debit cards that we no longer think in terms of using cash.

What is interesting is that many banks in the USA operate what is called a “fractional reserve” banking system.

Fractional-reserve banking is a form of banking where a bank maintains a fraction of the total amount in its customers’ deposit accounts as reserves (of cash or deposits at the central bank) to satisfy demand from depositors. Funds deposited at a bank are mostly lent out, and the bank keeps a fraction (called the reserve ratio) of those funds as bank reserves.

That page shows that some banks keep only 10% of deposits on hand and loan out the remaining 90%. When people lose confidence in the banking system, there may be a “bank run,” which is defined as “the concerted action of depositors who try to withdraw their money from a bank because they think it will fail.”

Recall the “bank run” scene from “It’s A Wonderful Life.”

Immediately after the door got closed at 6 p.m., the folks at the Bailey Building and Loan had only two dollars left, which they promptly placed in the vault.

What if that was your bank and you arrived just before 6 and you wanted $20?

We can well imagine someone saying, “Mike and Vicki, that was a scene from a movie, a completely fictitious situation.”

Agreed. But did you know that there has been a history of bank runs that continues to modern times?

An online search on “bank runs” reveals that a significant percentage of bank deposits have been withdrawn from banks in Greece because of economic upheaval there.

More and more people are concerned about bank issues like this, as is plain from the number of times people have searched for the term on Google. A Google trends chart reveals this concern:

We are taking the liberty of linking to articles that reveal that what we may think of as available become unavailable funds:

An October 12, 2012, article states that an Executive Order was signed that gives certain leaders the “power to freeze all bank accounts and stop any related financial transactions” from certain persons.

Are we making a mountain out of a molehill?

Only if you can prove that there has not been a history of people being framed and wrongfully accused over the years.

What are the chances of any professional truck driver having this happen to him or her? Frankly, we don’t know.

Bank Issues for Truckers to Consider

Here is some mental fodder for you to consider: If you have all of your savings in a bank and then there are bank issues of one sort or another — such as unavailable funds, a bank run, a bank holiday, a bank account seizure, a credit freeze or any other dire financial situation — what will you do to survive financially?

Of course, we recommend having a personal emergency fund and a truck fund from which you pay for things on the road.

We do not recommend taking huge sums of money with you on the road, like one trucker did.(1) Of course, this driver drew attention to himself and was nailed for narcotics.

Still, let the point remain: If you are found to have a large amount of cash with you on the road, you could be accused of something of which you may not be guilty.

We had a Twitter direct message correspondence with someone in late 2012 who said that he has his paycheck loaded onto his Comdata card. Other people may have chunks of money sitting in other virtual accounts like PayPal.

We are not saying that any of these monetary systems will fail.

We are only saying that you should consider what to do in case they do. Please consider all of your options.

In baseball, a “backstop” may be defined as “a wall, wire screen, or the like, serving to prevent a ball from going too far beyond the normal playing area.” Do you have a backstop in place for your money?

A “firewall” has been defined as “A fireproof wall used as a barrier to prevent the spread of fire.” In the event that one or more bank runs begins, how will you protect the money you’ve placed there for safe keeping?

Money saving tip: The way and the place where you keep your money are just as important as the amount that you save.

Some trucks crash and burn. If you keep all of your cash in your truck and it ever burns, you risk losing it all. What will your family or home support team do in that case?

True, some people like diversifying their investments. But investments are usually long-term financial obligations.

What will you do to survive during times of potential bank issues and unavailable funds? Plan ahead. Don’t be caught wanting should “crunch time” come.

Return from Bank Issues, Unavailable Funds and Truckers on the Road to our Budgeting page or our Truck Drivers Money Saving Tips home page.

Thank You for Requesting Our Truck Cam Comparison Sheet

Comments to FMCSA on Detention

Comments to FMCSA on Hours of Service