For many years, we have used baking soda (or sodium bicarbonate) in cooking; however it works wonderfully well as a low-cost cleaning agent. 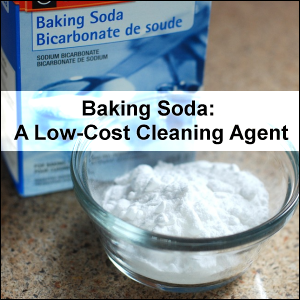 We have used this in the trucks we have driven over the years and will share with you the applications we have made.

Vicki uses this product most often when brushing her teeth. We use it in a recipe for homemade toothpaste, together with stevia, coconut oil and Peppermint essential oil.

Some people have used baking soda to brighten their teeth but Vicki has never experienced this herself.

We have sprinkled the soda into the top of our portable toilet on those occasions when it has taken us longer to get to a place where Mike could actually wash it.

A dab of soda, a bit of water and a small wad of toilet paper with which to scrub are all it takes. Rinse the soda residue and toilet paper down. Very convenient!

In a similar vein, we have used both Dawn dishwashing soap and baking soda to clean our ice chest.

There have been times when an egg broke, a package of raw meat developed a leak, or something else leaked inside the ice chest, requiring a thorough cleaning.

The soda not only deodorizes and cleans, but also helps to remove discoloration.

The work goes faster if we have a scrub brush with a handle like the one shown here.

The bristles can get down into the corners and crevices (especially on the textured lid) the way we can’t with just a dishcloth alone.

The largest job we ever tackled with baking soda in a truck was when we were issued a truck by U.S. Xpress that had been used by a team that smoked — a lot!

From the first moment we were in the truck, we smelled smoke. Vicki always gets very bad headaches when she is around cigarette and cigar smoke, so she suffered greatly while trying to figure out how to deodorize and clean the truck. (This was before we started carrying sodium bicarbonate with us full-time.)

During one time at home, we bought a pound box (16 ounces) of baking soda. Vicki mixed some in water and proceeded to clean the walls of the truck, especially in the sleeper. That helped some, but there was still a strong smell in the truck. We left an old butter tub with a pound of soda sitting open in the truck to absorb odors.

Perhaps you’re like us in that once the coverings over the windows in the sleeper are snapped in place, we never remove them. Well, being as how this was a used truck, we didn’t think to remove the coverings. However, as Vicki was cleaning one day, she unsnapped the edge of one cover and was shocked at what she found.

There was a thick layer of yellowish black on the windows! This was a build-up of cigarette pollutants. (We wish we had a photo, but this happened before we owned our first digital camera. The closest we can come is the image at left, which Vicki simulated based on what she remembers.)

Vicki wondered, “If there was that much build-up on the windows, what must those other drivers’ lungs look like?” (By the way, we encourage smoking truckers to quit.)

Needless to say, Vicki used the baking soda mixture to clean the windows, then rinsed them and then replaced the cleaned covers. From that point on, the cigarette smell seemed to greatly decrease. Thank goodness!

At home, we have used sodium bicarbonate to deodorize and wash clothing (particularly after Vicki once accidentally splashed gasoline on herself at the pump)

We’ve used it to get rid of fleas in the carpet, make the vacuum cleaner smell better, deodorize our refrigerator and freezer, remove stains from carrots on our food processor, and clean car’s battery terminals.

Vicki seems to recall once when she was growing up — when her sister once got mercilessly stung by yellow jackets — her mom put either a paste of bicarbonate of soda or calamine lotion (perhaps both) on the sting sites. (Of course, those who are allergic to insect stings — such as having an anaphylactic reaction — need to be treated appropriately.)

All of the packages we’ve ever seen that sodium bicarbonate has been sold in have been paperboard boxes.

If you think that your product will not get wet, it may be OK to leave it there.

However, as shown here, Vicki stores ours in a lidded plastic container that used to hold bouillon cubes (a flavoring aid which we use most often to season meats when cooking in a crock pot).

By the way, soda is also useful in some food preparations apart from baked goods.

Other Uses of Baking Soda

There are many other uses for this product, a couple of resources of which are here and here.

You may find the product useful if you carry a pet with you in your truck.

We understand that baking soda on a dampened cloth when put on a windshield helps repel water. We’ve never tried this, but would be interested to know if it works as well as Rain-X.

Vicki has also used this mild abrasive to clean “grunge” off the white lid of the 1-gallon beverage jug that Mike carried with him in his local truck driving job.

Money saving tip: Besides the usual name brand products, you can find store brands of baking soda at many grocery stores. These are usually less expensive — sometimes significantly less expensive.

See if buying a slightly larger box will save you money. If you won’t use it in a timely manner, however, just go with the smaller box.

Consider the impact of this product on your health. It could be used medicinally although adverse reactions can occur.

Some costly personal hygiene products can be eliminated from your budget by using this product instead.

The powder may not be in the same form as the personal hygiene products you’re using, but with ingenuity, you may be able to create a reasonable alternative.

How to Sleep Better as a Professional Truck Driver