Vicki has long had an idea for a “gap connector” to close the gap between truck and trailer similar to that which is used on articulated buses, like the one shown below. 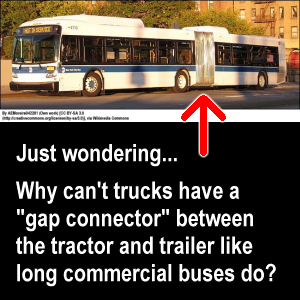 Yes, engineers would have to design some set-up that would make it easy for

But if reducing wind drag and air resistance between the tractor and trailer is a worthy goal, this kind of apparatus — or something very similar — should be considered.

If you look on Wikipedia for “articulated bus“, you will see images of buses made with “two rigid sections linked by a pivoting joint.”

On such a bus, you will see that the pivoting joint is covered with a flexible device.

This device reminds Vicki of a Slinky® or a bendable straw.

When the bus turns, the device flexes to accommodate the movement.

Vicki has been unable to find the name of this device.

However, one of our readers is likely to know it or be able to find this information.

Why Can’t Trucks Have a Gap Connector?

Why can’t truck manufacturers come up with a gap connector like this to use between tractors and dry van trailers?

Is it because the angles at which trucks turn may be much sharper than buses turn?

It is possible that an extra connection device would need to be put on the fronts of trailers.

Now, let’s see what happens in the marketplace…

(Note: An alternative spelling might be “gap connecter” — ending with “er” instead of “or” — although the idea for this device has no bearing on any product or service by a similar name.)

Money saving tip: It is well known that in order to increase a truck’s fuel economy, air resistance or drag needs to be reduced or eliminated from around the vehicle. One of the most difficult places to reduce drag has been between the tractor and trailer.

So that articulation can occur, there is only so much shortening of the distance that can take place between the back of the tractor and the front of the trailer.

Items that create a vortex of air have been able to reduce drag in this area of the truck to a certain extent, as have trailer nose cones.

Another potential positive that could result from having a gap connector installed is less opportunity for theft of load locks from behind tractors.

Return from Gap Connector Idea for CMVs Based on Articulated Bus Design to our Truck Operations page or our Truck Drivers Money Saving Tips home page.

Side Skirts for Tractor Trailers to Increase Fuel Efficiency