Are your truck’s lug nuts on securely? Would having lug nut torque indicators help you know that at a glance? 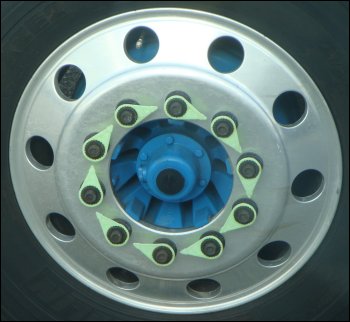 On our student driver page, we revealed how we were instructed during truck driver training school to look on the tractor trailer during a pre-trip inspection.

Included in this inspection was looking at the rig’s lug nuts to make sure that they were not “cracked, broken or missing.”

But we were not informed about checking to make sure that they were tight enough.

Tragedy on the Road

An accident caused by a tractor trailer in mid August 2011 (as of the time of this page was originally written) was still under investigation and the article itself is a bit confusing.

While one part indicated that the entire rear axle of the truck came off, it also said that the trailer’s wheels came off.

The wheels that separated from the truck ended up killing a woman.(1)

Another article written in December 2011 said that a woman died after a truck tire smashed her car. The truck driver did not stop and police are looking for the truck.(2)

Other statistics from the article state:

Ms. Chmielewski is the seventh person killed on Ontario roads by a loose wheel since 1997, according to the Ministry of Transportation.

There have been 47 other “wheel-off incidents” in 2011, according to Bob Nichols, a spokesman for the Ontario Ministry of Transportation.

To us, this underscores how critical it is during a pre-trip inspection check to make sure that there are no loose lug nuts and that the lug nut torque is sufficient.

A non-fatal “wheel off” accident happened in the UK in July 2012. The driver was fined.

Another wheel separation — complete with rim — occurred in August 2012 in Canada and resulted in a smashed car.(3)

According to the article: “The truck driver has been charged with failing to maintain a proper log book or complete a pre-trip inspection, and he has been suspended from driving for 72 hours under the Highway Traffic Act.”

Ron Heusser, who has been in the accident-reconstruction field more than 20 years, said he’s never seen so many accidents caused by truck tires.

“It’s not common at all for wheels to come off,” said Heusser, who owns Engineering Accident Analysis in Kent. “Typically, it’s either a bearing failure that comes from lack of grease, oil or over-torquing or loose lug nuts.”

A page on the website of a company that makes Lug-Lock™ states:

Loose wheel nuts can occur for a variety of reasons, including undertorquing, overtorquing, differential thermal contraction, and improper mating surfaces. …

To assist with making sure that there are no loose lug nuts on a truck which can give rise to “wheel separation accidents,” there is an invention that we call “lug nut torque indicators” that we have seen installed (mostly on the steer tires) of some trucks.

The Wheel-Check.com website refers to these as “loose wheel nut indicators.”

Vicki took a picture of a set of these in April 2010, as shown above.

A page on their website shows causes of bolt or lug nut loosening.

And they also have a page on their site with links to articles about truck tire wheel separation accidents.

What We Personally Saw

The only time when we have ever seen a wheel come off a vehicle was late at night on I-85 in northern South Carolina.

We were traveling near a four wheeler whose driver had to quickly exit the road amid sparks as the axle dragged the ground when the car’s left rear wheel separated practically right in front of us.

The wheel with the tire still on it rolled right up alongside the concrete barrier that separated the road from the median.

No one was hurt (other than being shaken up emotionally, we imagine).

But the situation could have been dire if a very heavy wheel (or pair of wheels) had come off a large truck!

Wheel-Check’s home page has a video with a couple of interesting facts:

What is Not a Wheel Separation

A tire that comes off the rim is not considered a wheel separation.

When a wheel separates from a truck, it all comes off, rim and all. 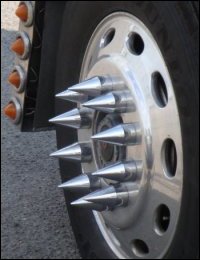 Obviously, if a driver has decorative wheel covers on his/her rig’s lug nuts (aka “lug nut covers“) — like the spikes shown at right — then it is impossible to install the lug nut torque indicators on the lug nuts.

(To us, these decorations look a bit aggressive. They remind us of the scythed wheels on one chariot in the race in the movie Ben Hur, listed here from Amazon.com, with which we have an affiliate relationship.)

If you are a professional truck driver and you have used lug nut torque indicators (or loose wheel nut indicators) in the course of your work within the last 6 months, we invite you to review it on this page through the form below, answering questions such as these: