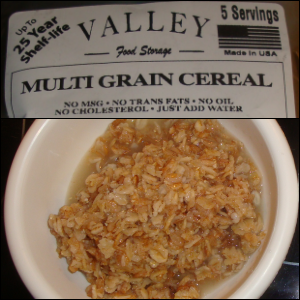 Vicki was contacted about reviewing the Multi Grain Cereal product and two others from Valley Food Storage in late 2015.

This page contains a review of the hot cereal product, complete with photos and commentary. 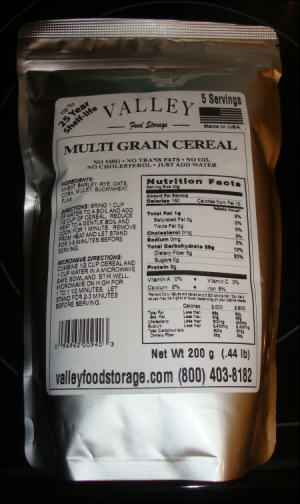 This product came sealed in the pouch shown here.

The label states: “NO MSG – NO TRANS FATS – NO OIL
NO CHOLESTEROL – JUST ADD WATER”

The directions are for both stove top and microwave preparations.

Vicki made two preparations on the stove top from what was in the pouch.

However, she will transcribe both stove top and microwave directions here (in mixed case, not all upper case as is shown on the pouch).

Directions: Bring one cup of water to a boil and add 1/2 cup of cereal. Reduce heat to a gentle boil and cook for 1 minute. Remove from heat and let stand for 3-5 minutes before serving.

Microwave Directions: Combine 1/2 cup cereal and 1 cup water in a microwave safe bowl and stir well. Microwave on high for 1 to 1½ minutes. Let stand for 2-3 minutes before serving.

On a personal note, Vicki is used to cooking “Old-Fashioned Oats” for her and Mike’s breakfast, so the “stove top” directions for this hot cereal were very similar.

How the Multi Grain Cereal Looks

This is how the cereal looked down in the pouch once it had been opened.

As you would expect from a product labeled “Multi Grain Cereal”, it was just grains, no fruit or other additives. 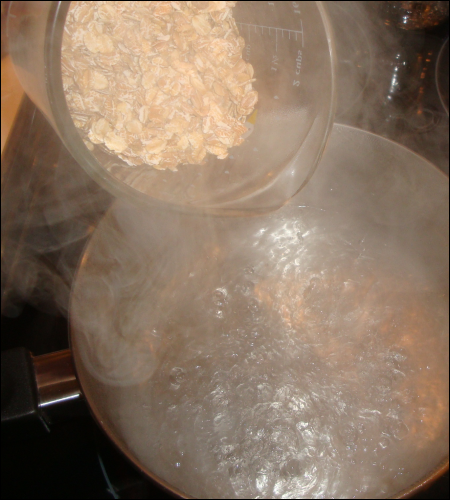 Per the directions, Vicki brought water to a boil and prepared to cook the cereal.

But she made one judgment call, the results from which she was not prepared.

Because she was used to cooking a cup of Old-Fashioned Oats in 2 cups of water, Vicki doubled the amount of water and cereal cooked for our first multi-grain cereal breakfast.

Upon starting to eat the cooked cereal, it quickly became apparent that this was a very filling cereal!

We had to “work” at eating all of it! 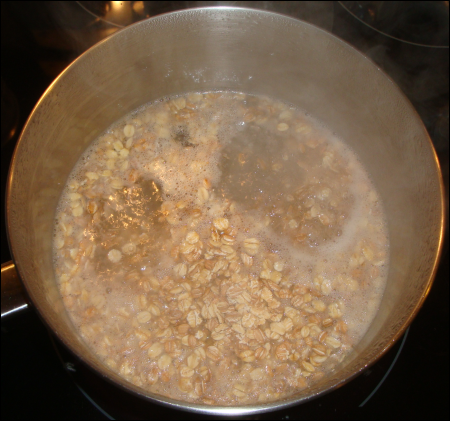 This is how the cereal looked just after having been added to the boiling water. 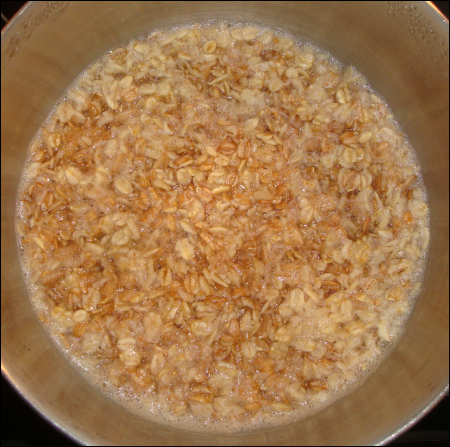 This is how the cereal looked after it had been cooked and been allowed to stand for 5 minutes.

You may not be able to see from the photo, but the “ring” around the edge at the wall of the pot was water that had not yet been absorbed by the cereal. 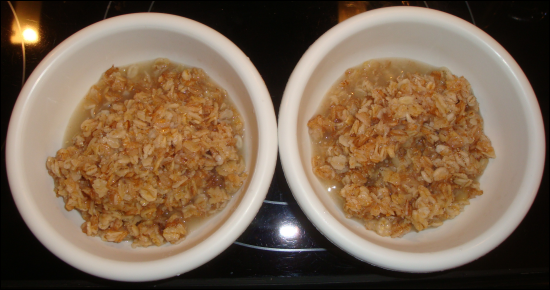 After the multi grain cereal had been transferred to our cereal bowls, it was apparent that there was still unabsorbed water along the edges.

This could possibly have been taken care of by either cooking the cereal longer or letting it stand longer (assuming that it would be absorbed).

If through repeated preparations of the cereal it became apparent that the grains would not absorb all of the water, the only other recourse would be to add less water than the directions call for.

As was mentioned previously, this cereal contains just grains and upon being cooked in the quantity Vicki chose, is very filling!

This “emergency cereal” has absolutely no sweeteners added.

For the purist who loves “just grains”, this is an ideal breakfast.

For others of us who like our cereal to be sweeter, any of a number of sweeteners can be added to taste.

It may be a good idea to have this hot cereal on hand for emergencies.

Furthermore, some consumers may value the combination of grains that this cereal provides and be willing to invest in it for diet and health.

As a point of cost comparison, HowMuchIsIt.org states: “At the local grocery store, prime rib is usually going to range anywhere from $7 to as much as $17 per pound. …”

Due to its “prime rib or higher” cost, we do not think that the average truck driver would want to buy and eat this multi-grain cereal on a regular basis.