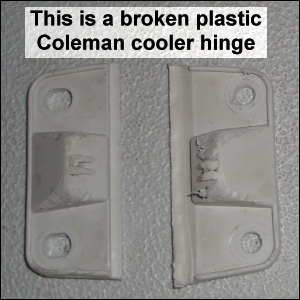 The Coleman cooler hinges that came installed on it were plastic, just like the ones shown below from Amazon.com, with whom we have an affiliate relationship.

During the months that he used his unit, one of the cooler hinges broke.

This page details how we temporarily improvised a fix for the broken hinge and with what we made a permanent replacement.

By way of background, Mike preferred the use of an ice chest to other methods of cold food storage because other methods had failed him in the past.

Therefore, it was necessary for him to find a fix for this problem, which we describe on this page.

When we were in the market for a new ice chest, we bought a Coleman 6-Day 50 Quart Ultimate Xtreme Wheeled Cooler because it was purported to keep “ice up to six days in temperatures up to 90 F.”

We found that it worked much better than our previous ice chests. 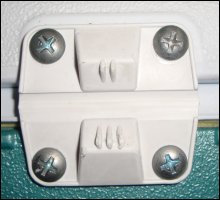 This photo shows a plastic hinge from this unit that connects the lid and ice chest body via anchoring with metal screws.

You will notice that the hinge is constructed in such a way that when the lid is open, it can swing back only so far.

The “stops” are designed to fit into each other; the top part has two notches and the bottom part has three. 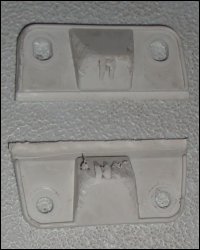 This photo shows the broken Coleman cooler hinge that was removed from Mike’s ice chest (devoid of screws). As one looks at the back of the unit, it was the connector on the left.

Vicki speculates — based on how badly dinged the stops are — that one of the reasons why this hinge failed is because it often came into contact with the side of the cabinet under which Mike stored it in the truck he used to drive for his trucking company. 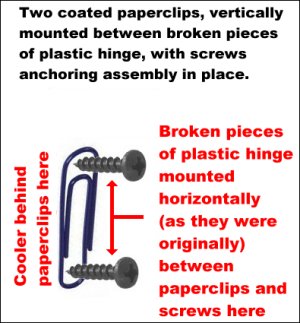 When Vicki discovered that the hinge had broken, she improvised a temporary fix:

Of course, as the lid was opened and closed numerous times each week, the paper clips were bent back and forth, making them weaker and weaker until they failed.

Vicki replaced the paper clips a number of times while exploring other options.

One of the options she explored was trying to find replacement hinges from the manufacturer.

Sure, Coleman cooler hinges are sold on their website. 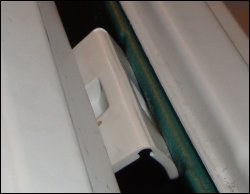 One of the things that concerned Vicki was the fact that the original Coleman cooler hinges and all manufacturer’s replacement hinges are plastic. If the plastic part broke once, plastic replacements could certainly break again and again and again!

This photo shows the view of the plastic Coleman cooler hinge in Mike’s ice chest from the inside when the lid is open.

Do you see the stress point and strain that it is under from the weight of the lid?

Vicki measured the distance between the screws — vertically and horizontally — to see if she could buy a different kind of hinge in the hardware section of a local retailer.

Evidently, the measurement between the centers of the holes must not be how hinges are measured because when she purchased a hinge according to her measurement, it did not fit the holes. Hmm…

Vicki also explored other replacement options, like a larger hinge.

There are units that are much larger, some with squared off edges and some with rounded edges.

Some hinges that we saw had as many as four holes for screws on each side.

We wanted something sturdy but that would allow us to use the four screws that came on the ice chest.

Finally, we purchased a 3-inch brass hinge with a non-removable pin and no additional screws. The unit was wider and longer than the original hinge, but when we held it up against the cooler, we determined that we could make it work if we could get four new screw holes punched.

We used these tools to install the new hinge on the ice chest: 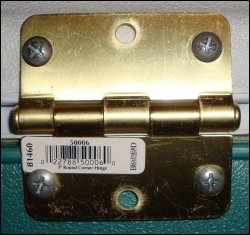 This photo shows the final result of the installation of the brass hinge on the ice chest, with the lid closed.

We didn’t even bother removing the UPC sticker first, in case you want to duplicate our efforts.

The hinge looks good from the outside. What about opening and closing the lid… ?

We experienced absolutely no problems.

The photo below is a view of both hinges as they appear from the inside when the lid is completely open.

Here is a close-up view of the brass hinge from the inside when the lid is completely open.

There is no problem with the part rotating around the pin keeping the lid from closing. Why?

Notice that just to the left of the rotating part, there is a built-in indention in the plastic.

You may wish to review the photos above to see how this indention looks when the lid is closed.

Vicki told Mike that now that the brass hinge has been installed, it will last longer than the ice chest itself.

Although the amount of money we saved on this replacement part is small compared to other things shown on this site, we are certainly pleased with our decision from both a money-saving and durability stand point.

You may also wish to view our update on this subject.

Money saving tip: In the course of your work as a professional driver, you will certainly encounter situations in which you will need to repair items or have them replaced.

Consider carefully how and with what the repair or replacement will be made.

In certain cases, you may automatically void a warranty if the work is done by a non-authorized repairman or the after-market part is not made by the manufacturer.

In other cases, a more durable replacement — such as our replacement of a plastic Coleman cooler hinge with a brass one — can save money down the road.

Remember: the old Depression era saying — “Use it up, wear it out, make it do, or do without!” — may be valid only in certain aspects of trucking.

In-Truck Meal Preparation and Preparing Meals on the Road

Eligible for a Safety Bonus? Read Tips to Help You Get It

Thanks! Your Truckers’ Savings Blog Email List Subscription has been Confirmed!