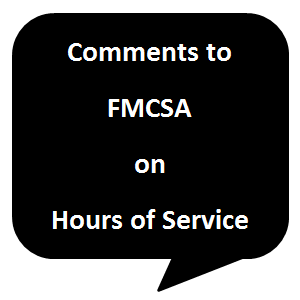 Having driven a commercial motor vehicle professionally for nearly 3 years; having been married to a man who has driven professionally for over 16 years; and having for nearly 10 years published information online that is geared to helping professional truck drivers save money (which is distributed to thousands of readers); I am commenting on the FMCSA’s Advanced Notice of Proposed Rulemaking regarding Hours of Service of Drivers.

The American Transportation Research Institute (ATRI) published a report in October 2017, listing the “Top Ten” critical issues in the trucking industry, according to commercial drivers and motor carriers.
[atri-online.org/wp-content/uploads/2017/10/ATRI-Top-Industry-Issues-2017.pdf (no longer online)]

The Hours of Service regulations in and of themselves need to be addressed, but they are only one piece of the pie when it comes to trucker safety and productivity. I will address a number of these points, too.

In the January 2018 issue of The ATRInsider,
[atri-online.org/wp-content/uploads/2018/01/ATRI-January-2018-Newsletter.pdf (no longer online)]

we read: “Many of the concerns surrounding the ELD mandate derive from the lack of flexibility in the Hours-of-Service rules. …the lack of flexibility in the rules kept HOS as the number three industry issue in the 2017 survey. The top strategy identified by survey respondents for addressing the HOS concern was to push for flexibility in how drivers split their driving, on-duty and rest time. … Many in the industry believe that with additional flexibility drivers would be able to rest when tired and could provide an opportunity for drivers to adjust their driving schedules to avoid some of the worst congestion chokepoints.”

I will share a true account of how my husband Michael was able to avoid a “congestion chokepoint” by timing one day’s drive time, even though it did not agree with him. According to a February 2018 article,
https://www.businessinsider.com/the-10-us-cities-with-the-worst-traffic-2018-2
New York City is the 2nd most congested city in the USA. Some years ago when I was riding full-time with him, Michael needed to drive a commercial motor vehicle from Milford, CT, to Greensboro, NC, which required him to drive on Interstate 95 (I-95) through the New York metropolitan area. The run can be completed legally in one driving shift (11 hours), but only if one encounters no congestion. In order to accomplish this, he had to begin driving at 2 a.m. However, this very early morning time frame has never been in sync with his circadian rhythm. Had the Hours of Service regulations been more flexible, he would not have fought against his own body to drive during that time.

Let’s look at a recent report.

If the Hours of Service regulations are intended to keep the motoring public (including truckers) safe, then why have fatalities among professional truck drivers reached their highest level in 29 years?

I do not believe that it is ever right for a professional truck driver to drive when he/she is fatigued. However, with a lack of adequate large truck parking in some areas of the country, truckers are caught “between a rock and a hard place” — meaning that in some cases, they must

Again when I was riding full-time with my husband Michael, he once had a westbound load coming out of New Jersey. It was late in the afternoon and we wanted to park to have dinner and then proceed. We literally stopped at 7 different truck stops on our way west trying to find a place to park and eat. The first 6 were all full with not even a single empty truck parking space being available. When he was near the end of his Hours of Service time limit, he found safe and legal parking at the 7th truck stop, which was quite a distance into Pennsylvania. We were unable to eat dinner until after 11 p.m. which put a strain on both of us.

Some truckers feel pressure to push themselves in order to earn a paycheck. There are numerous issues contributing to this pressure:

Were truckers not pushed to work during times when their productivity may be low (such as fighting heavy traffic); were truckers paid for all of their time when operating and being responsible for a commercial motor vehicle (including all detention time); were there sufficient truck parking to allow truckers to park whenever needed; and were truckers given the flexibility to work in accordance with their circadian rhythms; there would be a lot less angst in the trucking industry and I believe that both safety and productivity would increase.

The Electronic Logging Device (ELD) mandate was purportedly put in place so that all professional truck drivers were “on a level playing field” when it came to abiding by the existing Hours of Service regulations. The ELD mandate had barely begun when various sectors of the trucking industry began applying for exemptions and waivers, two examples of which are documented here.
https://www.fmcsa.dot.gov/hours-service/elds/electronic-logging-device-eld-exemptions-and-waivers
https://www.fmcsa.dot.gov/hours-service/elds/eld-hours-service-hos-and-agriculture-exemptions

there can be no “one size fits all” approach to fixing the Hours of Service regulations.

On August 1, 2013, I wrote a guest blog
https://arpcotransportservices.wordpress.com/2013/08/01/the-new-hours-of-service-rule-impact-on-truckers-finances-numerical-fallacies-and-common-sense-questions/
in which I picked apart both the rationale behind and the 2013 change to the Hours of Service regulations. Here is the last paragraph from that guest post:
“What will it take to demonstrate whether the new HOS rule is about safety or control? I re-state what we asked through our blog on July 2, which was based on this article: ‘What if the new HOS rules don’t reduce truck driver fatigue or improve safety? What if the “common sense, data-driven changes” and reduced work hours back fire? Will the FMCSA be willing to reverse course? How long will it take before we know?'”

It has been over 5 years since the FMCSA last made sweeping changes to the Hours of Service regulations and as I predicted, we are no safer now than we were before the changes were made.

A September 12, 2018, article
https://www.overdriveonline.com/hours-regs-suspended-for-11-states-and-d-c-for-hurricane-florence-s-c-reversing-highways-for-coastal-evacuations/
stated in advance of Hurricane Florence, “The Federal Motor Carrier Safety Administration has… issued a regional emergency declaration for” 13 states and Washington, D.C. Furthermore, the article states, “The declaration exempts truck drivers providing direct support of relief efforts related to the hurricane from Parts 390 through 399 of the Federal Motor Carrier Safety Regulations. The declaration is effective immediately and will remain in effect through the duration of the emergency, or through Oct. 10, whichever is less.”

A similar waiving of the regulations has been issued in 8 states in advance of Hurricane Michael.
https://www.ccjdigital.com/regs-waived-for-relief-load-haulers-in-8-states-for-hurricane-michael/

The actions described in these two articles mean that in advance of and during major weather events, the FMCSA places trust in targeted truckers driving in targeted locations to operate their vehicles safely apart from the stated regulations. Why then can the FMCSA not trust truck drivers to drive safely apart from the Hours of Service regulations at other times of the year?

Should the argument be raised that the FMCSA can’t trust truckers based upon their individual circumstances to make their own decisions regarding the hours when they can safely and productively operate commercial motor vehicles, let the agency remember that these truckers have been entrusted with tractors, trailers and freight that may be valued in the millions of dollars. If trucking companies can trust truckers with valuable physical commodities, why can the FMCSA not trust them regarding the safe movement of those commodities? Some truckers may simply require training on how best to order their driving schedules to maximize both safety and productivity.

Return from Comments to FMCSA on Hours of Service to our About Us page or our Truck Drivers Money Saving Tips home page.

Thank You for Requesting Our Truck Cam Comparison Sheet

Thank You for Documenting Your Wait Time

Comments to FMCSA on Detention