Trying to lump all “female truckers” into one category is about as easy to do as herding cats. 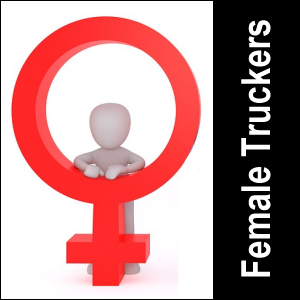 There is a lot of variety among women truckers.

They may be single, married, widowed, divorced or any other classification you care to name.

But they all have one thing in common: they’re female.

If you are a passenger in a truck that you’re not driving, make sure that the person driving the truck has the correct rider authorization for you (especially if the driver is a company driver) and appropriate insurance (if required).

Female Truckers in a Male-Dominated Industry

Until the viewpoint changes in the male-dominated trucking industry, some folks will always think that female truckers are inferior to their male counterparts.

While it may be true that some lady truckers have less physical strength than some male truckers, the population of “over 200,000 female long haul truck drivers in America” definitely has the edge as a group over guys according to an infographic from TruckerToTrucker.com:

We drove together as a husband and wife professional truck driving team for almost three years.

For what it’s worth, Vicki passed her CDL road test in truck driver training school on the first try but numerous guys in our same class did not — including Mike.

Never let anyone tell you that just because you’re female, you’re inferior as a professional truck driver.

If you earned your Class A CDL, you’re just as much qualified to drive a big rig as any man.

That isn’t feminism; it is fact.

We’ve never seen parts of this issue addressed anywhere before.

In general, there are two sets of situations that a female trucker who co-drives with another driver faces: 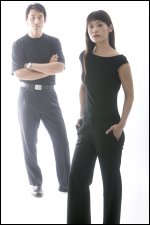 You may find that one of you is better suited to some things (like city driving or driving at night) than the other.

Seek to divide your job responsibilities as evenly as possible.

Other than the 6-week training period when Vicki started out with our first trucking company — and had a male trainer named Bill — we have never been in a mixed gender co-driving situation with someone outside family.

Vicki never even thought about the possibility that her trainer might take advantage of her.

During the brief time that Mike served as a driver trainer, he refused to take lady driver trainees with him.

If you’re a lady entering the industry, you may want to read the pages we’ve written about driver trainers, student drivers and mutual expectations between the two.

One of Mike’s sisters co-drove professionally for a time with a guy who eventually became her husband.

She had to set some ground rules on appropriate versus inappropriate behavior in the truck.

Every female trucker who is contemplating a long-term relationship with a male co-driver should do the same.

Do not allow yourself to be set up for molestation or rape.

Arrange in advance for an “out” if a situation seems to be headed in that direction. 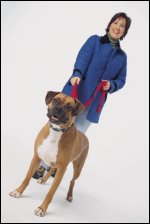 Women who drive trucks may be targeted by guys for one reason or another on the road.

Do not dress provocatively.

Present a business-like attitude in all you do.

If you want to be treated as a lady, talk and act like one.

Some lady truckers take a pet in their trucks with them for security reasons or to avoid loneliness on the road.

Pet supplies in truck stops may cost more than for what you can purchase elsewhere.

Endeavor to park in well lit and secure lots at night.

Make sure that folks inside your company — and preferably also your family members — know where you are at all times.

The 6-1/2 minute video embedded below shows women’s self defense techniques against an attacker at close range using no weapons.

The author said, “Smaller people defend themselves against larger attackers all the time.”

He coined a poem to help ladies remember the eight “soft targets” to exploit on an attacker’s body:

We also have more information on our home security and self defense pages.

One product we recommend is the BlueParrot noise-cancelling headset, available through Amazon.com, with whom we have an affiliate relationship.

In general, women have a greater need to express themselves verbally than men.

For female truckers with families back home, it is important to keep family ties strong.

If you desire to talk, shop around for a good telecommunications service.

If your service of choice is a mobile or cell phone, we recommend that you get a headset like the one shown here so that you can talk “hands-free.”

Early on in our team driving days (long before CSA), we were assigned a load heading north from our company’s South Carolina yard.

We noted during a pre-trip inspection the low tread on several of the tires, but the folks in the shop didn’t want to deal with replacing three tires at once on the company’s equipment. 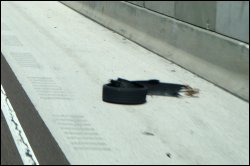 Vicki was driving near Greencastle, Pennsylvania when a trailer tire blew out.

We were sent to a nearby commercial tire business.

While we were inside, Vicki tried to get the person at the trucking company to authorize that two other tires with low tread be replaced, too.

The person on the inside wouldn’t pay attention to her, perhaps because he thought she was just a female trucker or a newbie or didn’t know any better.

Vicki had already consulted with the mechanic about the other two tires and he had agreed — in his “professional opinion” — that it was only a matter of time before they blew, too.

So she got the mechanic on the phone to report the situation to the company.

Eventually, the company had to pay for three tires on the road that they could have easily taken care of at the terminal. 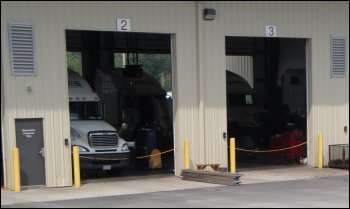 When you are faced with any kind of truck issue — preventive maintenance, scheduled repair or breakdown — do not allow anyone to talk down to you or refuse to answer your questions.

You are responsible for the rig you drive, even if you are a driving a rig owned by someone else.

If someone refers to you as a “little lady,” determine if this is meant as a compliment or put-down.

If you sense in any way that it has been used condescendingly, you can say something like this:

“Thank you for calling me a lady, but I am also a professional who needs a safe truck to drive for the lowest cost possible. Are you willing to help me with that?”

Give the person the opportunity to answer affirmatively.

If you sense any hedging, ask if there is someone else — like the mechanic’s supervisor — to whom you can talk.

Seek to learn as much as you can from the mechanics who do your truck work so that you are not “held hostage” by those who might take advantage of what you don’t know about your truck mechanically.

Don’t forget that you can also write a service review about the quality of truck service you received.

If it helps, you can state that you’ll be writing a review for this website about the service you receive.

Sometimes nothing causes a person to “straighten up and fly right” like the knowledge that his or her work (and attitude) will be documented for the world to see.

Money saving tip: Before you go out on the road, plan what you will need to take with you.

This includes personal hygiene items and hopefully natural products to help you when you’re stressed.

Do not attempt to lift items into or out of your truck that are too heavy for you.

If you can, break down the package into a smaller and lighter packages.

If you can’t make the package smaller, get help.

Practice looking at your surroundings often, especially when you are out of your truck.

Don’t miss the obvious or the things that may happen while you’re looking for the obvious.

Return from Female Truckers and Their Unique Money Saving Challenges to our Health and Wellness page or our Truck Drivers Money Saving Tips home page.

Home Security for You, Your Possessions and Your Truck

Trucking Shows Tips For Exhibitors, Truck Drivers to Save Money