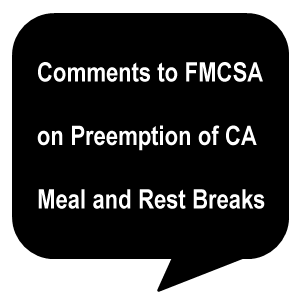 Having nearly 3 years of experience in driving a commercial motor vehicle; having been married to a man who has driven professionally for over 16 years; and having for nearly 10 years published information online that is geared to helping professional truck drivers save money (which is distributed to thousands of readers); I am commenting on the FMCSA’s Notice: Petitions for Determination of Preemption: California Meal and Rest Break Rules.

By way of background, the American Trucking Associations (ATA) has attempted to override state labor laws numerous times on the congressional level. U.S. Rep. Jeff Denham (R-CA) introduced what has been called the “Denham Amendment,” which falsely claims that the true intent of Congress in the 1994 Federal Aviation and Administration Authorization Act (FAAAA) was to preempt state labor laws that protect employees.

If passed into law, the Denham Amendment would have relieved motor carriers of the obligation of paying professional truck drivers for anything other than piece work wages (aka piece-rate pay or piece rate wages), meaning the amount of money they are paid per mile to drive.

To show the extent to which the ATA wants the Denham Amendment passed, one need only look at the way that they have rewarded Rep. Denham during these sessions of Congress:

Even so, the Denham Amendment failed to be passed:

Realizing the multiple failures to get the Denham Amendment passed on the congressional level, the ATA have now turned to the U.S. Department of Transportation (USDOT) to achieve the same outcome, in order to try to change how the state of California has decided that many workers in their state must be paid.

Per California Labor Code Section 226.2,
https://law.onecle.com/california/labor/226.2.html
truck drivers in California who are paid by the mile or by the load must be paid separately for time that they are not actually driving. This means that companies that pay their drivers by the piece (in cents per mile) must also pay them an hourly rate for time spent doing things like vehicle inspections and detention time.

Name one other industry where workers work on the job but aren’t paid for their labor or time on the job.

One of the biggest problems in the trucking industry is truckers being detained in the docks by shippers and receivers.

Regarding detention, how big of a problem is it and what are the safety ramifications?

In one of the first reports of its kind, the U.S. DOT has concluded that time spent detained at shipper or receiver facilities cuts truck driver pay by between $1.1 billion and $1.3 billion annually, in addition to crimping industry safety. An extra 15 minutes spent detained beyond the standard two-hour window causes industry crash risk to climb 6.2 percent, the DOT has estimated. That’s an average of about 6,500 additional crashes annually, the report notes.

Drivers see an average annual pay loss of between $1,281 and $1,534, the report concludes, and carrier income is cut by between $250 million and $302 million annually due to detention time, the DOT says.

The intention of the Petitions for Determination of Preemption: California Meal and Rest Break Rules is far greater than

Rather, the Petitions for Determination of Preemption: California Meal and Rest Break Rules is the ATA’s backdoor attempt to:

Looking only at the trucking industry, an October 19, 2018, article from Business Insider stated:
https://www.businessinsider.com/truck-drivers-salary-minimum-wage-court-decision-pam-2018-10

A federal court decision in Arkansas today may drastically change the way truck drivers are paid.

The court ruled against PAM Transport, an Arkansas trucking company founded in 1980, after the firm was named in a class action suit for alleged violations of the Fair Labor Standards Act, a federal law that requires employers to pay truck drivers at least minimum wage.

On Oct. 19, the US District Court in the Western District of Arkansas, Fayetteville division, denied PAM’s motions to dismiss the claims of the three truck drivers who sued PAM in 2016 and nearly 3,000 drivers who joined the class action suit.

That denial means that the Court has decided that the time a driver spends waiting in his truck in the sleeper birth still constitutes work — even though the driver may log that time as “off-duty.”

The ATA does not represent professional truck drivers and does not support safety unless it suits their purpose.

The ATA’s Petitions for Determination of Preemption: California Meal and Rest Break Rules must be rejected by the FMCSA/USDOT based upon

California’s meal and rest break laws must not be preempted, as they, along with California’s other labor laws, were created to promote safety and protect employees from wage abuse.

Furthermore, owner-operators within the trucking industry have the right to set up contracts with shippers and receivers that specify all of the terms of pick-up and delivery of freight, including detention pay. The passage of preemption of California’s meal and rest breaks laws will erode owner-operators’ power to do business as they see fit.

Should the FMCSA/USDOT push through preemption of California’s Meal and Rest Break Rules:

Each and every state within the United States of America must be allowed to continue protecting their workers as they see fit. And every truck driver needs to be paid for all time worked, whether driving or not.

Return from Comments to FMCSA on Preemption of CA Meal and Rest Breaks to our About Us page or our Truck Drivers Money Saving Tips home page.

Request a Link Exchange with Truck-Drivers-Money-Saving-Tips.com