Failure to maintain a safe following distance behind the vehicle in front of you can lead to either a “near miss” or a traffic accident. 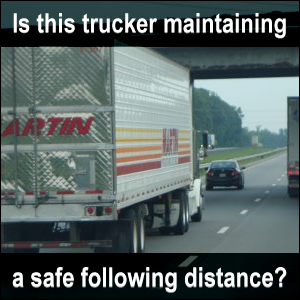 A near miss is one of those heart-pounding situations in which you realize just how close you came to a collision.

You can still be cited for following too closely or tailgating or worse.

An accident is costly in both time and money.

Besides the damage done to your truck and the other vehicle(s) involved, there may be personal injuries or fatalities.

Following distance can very quickly turn into braking distance and stopping distance depending on slowed or stopped traffic ahead.

We read articles from time to time of professional truck drivers who fail to maintain adequate following distance and wind up in accidents.

Here are some we found online with pertinent quotes:

Was There Anything in Common Between These Accidents? 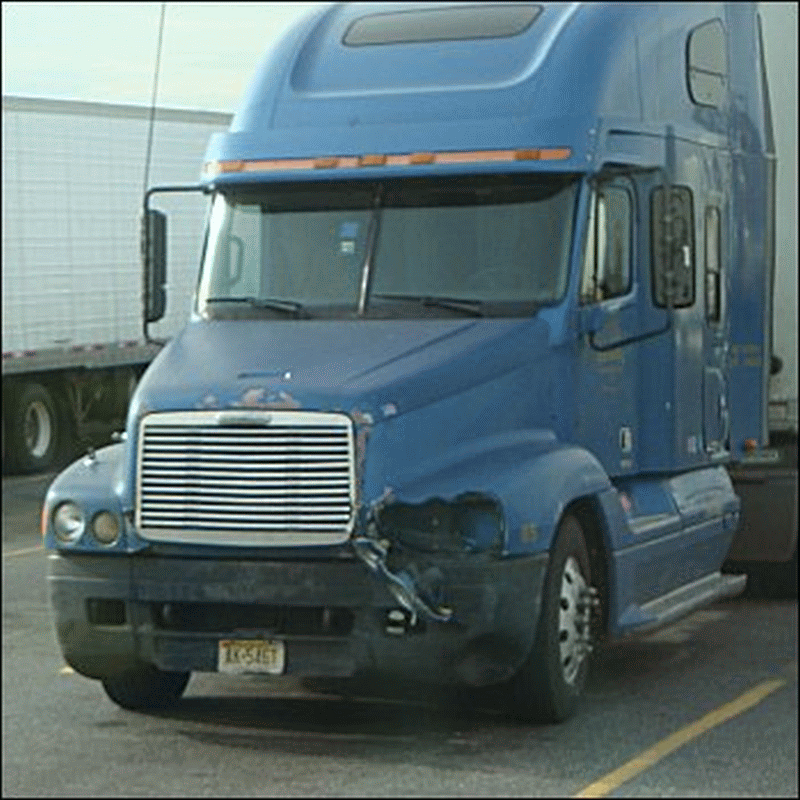 If you’re like us, you tend to look for trends.

There are a few red flags we see from the foregoing and similar articles about following distance:

The tractor in the photo here clearly shows that the driver’s side headlights have been smashed out.

This was obviously due to a collision.

Note: By virtue of the fact that the lights are not all working, this truck is not legal or compliant to drive as-is.

Always make sure that you can see where you’re driving.

As we mention on our safe driving page,

The formula to calculate Total Stopping Distance is: 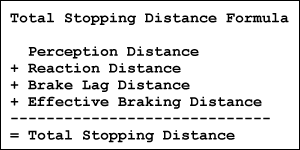 Following too closely may be defined as, “situations in which one vehicle is following another vehicle so closely that even if the following driver is attentive to the actions of the vehicle ahead he/she could not avoid a collision in the circumstance when the driver in front brakes suddenly.”(6)

Remember that you need to leave more following distance between your commercial motor vehicle and the traffic in front of you than a car does.

For your convenience, we have embedded below the video “Big Rig Following Distances”:

Money saving tip: In order to maintain a safe following distance, always bear in mind your terrain and what could be “over the hill.”

Always make sure that you can brake safely and smoothly.

Remember, it takes longer to stop in certain conditions.

Your following distance should be geared to many things including traffic flow and weather.

While some trucks are equipped with anti-lock brakes (ABS), that equipment may not totally prevent skidding and jackknifing, especially in inclement weather.

Be a defensive driver.

One rule of following distance is to never ever overdrive your headlights.

Be especially alert when driving during non-daylight hours.

Always perform a pre-trip inspection and verify that your brakes are adjusted correctly.

Even if you have been maintaining proper following distance, all bets are off regarding being able to brake effectively if your brakes don’t work!

Never get in a hurry.

Remember that you are a professional and that you are being paid to move freight safely from one location to another.

The well-being of you as a person, the motoring public around you, your truck and the freight you are hauling are worth whatever extra time you need to be safe.

Of course, if you have trouble making a safe on-time appointment, you need to inform your driver manager.

As one of our old fleet managers once said, “The fastest way to cool off a hot truck is in a ditch.”

As with other truck operations, so it is with maintaining a safe following distance behind other vehicles: An ounce of prevention is worth a pound of cure.

Return from Maintain a Safe Following Distance Behind Other Vehicles, Trucker to our Truck Operations page or our Truck Drivers Money Saving Tips home page.