Tailgating — or following too closely behind the vehicle in front of yours — is both rude and dangerous. 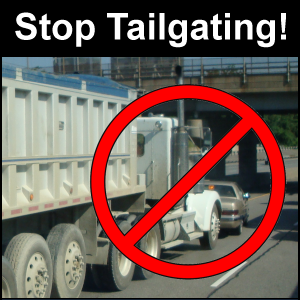 In the photo shown here, the truck driver is so close to the car in front that it almost looks like the truck is pushing the car down the road!

All it would take is for the car driver to

for a collision to take place.

Because there is so little room between the two vehicles — traveling down an interstate highway at highway speed — that the trucker would not have time to compensate.

The Space Around Your Truck

As you drive professionally, you should always control the space around your truck.

To some degree, that includes the space behind your truck to prevent others from tailgating you.

According to this section of the Federal Motor Carrier Safety Administration’s website,

Following too closely may be defined as, “situations in which one vehicle is following another vehicle so closely that even if the following driver is attentive to the actions of the vehicle ahead he/she could not avoid a collision in the circumstance when the driver in front brakes suddenly.”

How Much Room Is Enough?

In the following YouTube video — “Drivers Ed: Rules of the Road #15 Following Distance” – the advice given is to leave three seconds of following distance behind the vehicle in front of yours.

Remember that this is for a car, not a tractor trailer. 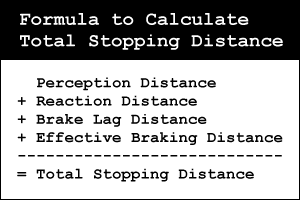 A Photo Is Worth A Thousand Words

It’s one thing to talk about tailgating. It’s another to see what is being talked about.

Vicki took the following photos when she was on the road with Mike during June and July 2009.

As you will see, they are quite instructive.

The first group of photos is of signs that can be seen along various roadways in the United States. 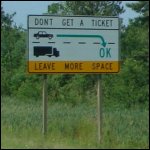 A sign that reads “Don’t Get a Ticket – Leave More Space.” Obviously, this is geared toward four-wheel vehicles that cut too closely in front of big trucks. 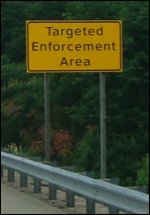 A sign that reads “Targeted Enforcement Area.” You may be more likely to be watched in places with this sign posted.

A sign that reads “Don’t Tailgate.” No other explanation is needed, is there? 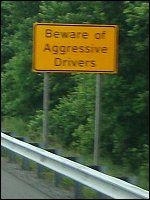 The definition of an aggressive driver is not dependent on the vehicle being driven (as we shall soon see).

This second group of photos shows trucks and cars following behind each other in various types of traffic situations.

Some of them show definite problems of following too closely. 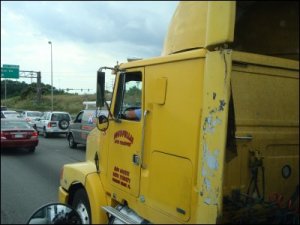 The following distance between a car and a big truck behind it, in stopped traffic on I-95 south of Washington, DC.

It appears the truck driver is vitally aware of the space in front of him. 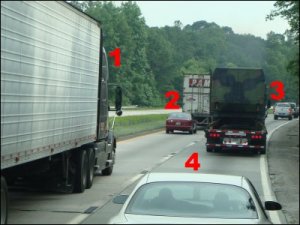 1. A dark truck behind a car. Is there sufficient room?

2. A red car following way too closely to the P.A.M. truck in front of it. Can the truck driver even see the car behind it or is it traveling in its “blind spot”?

3. A flatbed unit behind a four-wheeler. Is there sufficient room? 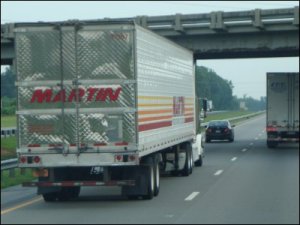 A big truck following behind a car at highway speeds on I-20, a little too closely. 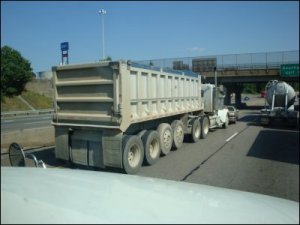 This is Vicki’s favorite photo of this series and the one from which the photo at the top of this page is taken.

The big truck in the left lane is tailgating a car at highway speeds on I-20.

The trucker is so close that it looks like the truck is pushing the car down the road! 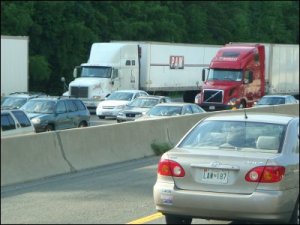 The following distance of two big trucks on the opposite side of the interstate in stalled traffic.

The white truck in the outside lane is behind another big truck.

The red truck in the middle lane is behind a car.

Is there sufficient room? 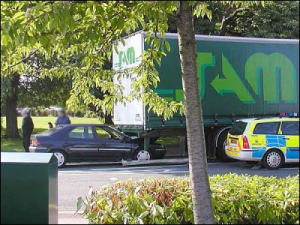 This picture is from Wikimedia, having this description:

“A rear-end collision in Yate, near Bristol, England, in July 2004. The car failed to stop when the articulated lorry stopped at a roundabout. The car’s bonnet can be seen deep under the rear of the lorry. There were no injuries.”

The British term “lorry” is equivalent to a big truck in the USA, just as a “bonnet” is what Americans would call a car’s hood.

This final photo summarizes our advice to all drivers regarding this subject of tailgating and following too closely.

Are Tailgaters Involved in “Accidents”?

Wikipedia defines an “accident” as “a specific, identifiable, unexpected, unusual and unintended external action which occurs in a particular time and place, without apparent or deliberate cause but with marked effects. …”

Based on this, we conclude that any collision that involves tailgating cannot technically be called an accident because it could have been expected. Think about that.

The FMCSA’s two overarching tips on this subject are:

We encourage you to read the details on their website.

As mentioned above, we go into more detail on proper following distance.

Money saving tip: Even seemingly minor incidents that happen as a result of tailgating are totally avoidable.

Besides being downright embarrassing, they can be injurious, time-consuming and expensive.

Wikipedia says regarding a rear-end collision:

A rear-end collision (often called simply rear-end or in the UK a shunt) is a traffic accident wherein a vehicle (usually an automobile or a truck) crashes into the vehicle in front of it, so called because it hits its rear. …

A typical medical consequence of rear-ends, even in case of collisions at moderate speed, is whiplash. In more severe cases permanent injuries… may occur.

For purposes of insurance and policing, the driver of the car that rear-ends the other car is almost always considered to be at fault due to not being within stopping distance or lack of attention.

That situation about the driver in the rear position “almost always” being at fault takes a different turn if a vehicle cuts in front of another.

However, more and more trucking companies are installing truck cams in their trucks to vindicate truckers who have this happen.

Another risk of following too closely is the accusation of being an aggressive driver or having road rage.

Is there anything you can do if someone is following you too closely?

Simply slow down enough to make the driver behind you want to pass you!

Consider the many potential costs associated with rear-end collisions:

Return from Stop Tailgating and Following Too Closely with Your Big Truck to our Tricks of the Trade page or our Truck Drivers Money Saving Tips home page.

Stolen Truck! Steps to Protect Your Tractor Trailer from Thieves