This is a review of the shower facility at the Pilot Truck Stop in Dalton, GA. Shower Review Pilot Georgia Dalton. 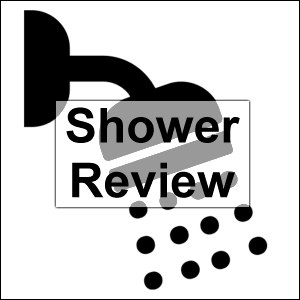 Name of truck stop and its location (city and state) where the truck stop shower is that I’m reviewing
Pilot Travel Center, Dalton GA
I-75, exit 326

How I rate the cleanliness of my shower room upon arrival
Very clean, as in new/pristine

What was the quality of the assigned bath towel(s)?
Adequate to meet my needs

How many towel hooks were in the room and where were they?
5
Directly outside shower stall

How was the mirror?
Clean upon arrival
A light was over it
Did not fog up during my shower

Did the electrical outlets in the room work well?
Did not work well

Anything else noteworthy about my shower experience
The electrical outlet had a red light glowing, indicating that it was not working. This was a GFCI type outlet and I could not get it to reset. Because of this, I was not able to use my blow dryer, which forced me to leave the facility with damp hair in the lower 40s (F). This causes me to downgrade my rating to a B.

How I grade this shower facility and my shower experience (A+ is the best; F- is the worst)?
B

Would I recommend this shower facility to other professional truck drivers?
Maybe

Additional comments
I prefer to use the kiosk when getting a shower. However, I had to wait in line as the printer for the kiosk was out of paper. 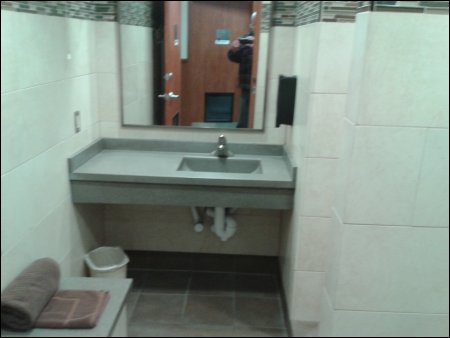 View of sink and built-in seat 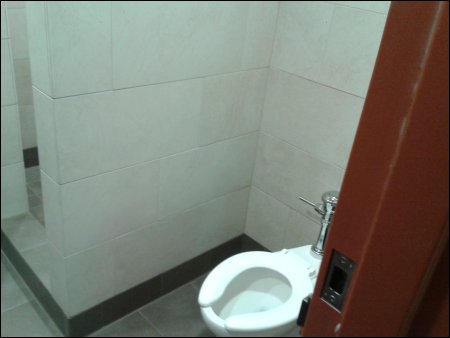 View of toilet with shower stall behind 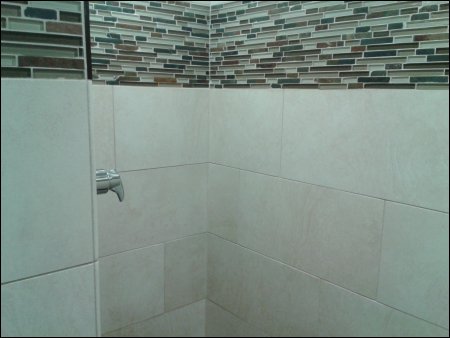 View of middle section and up of shower stall