Why is smuggling human beings among the worst decisions that a professional truck driver can make? 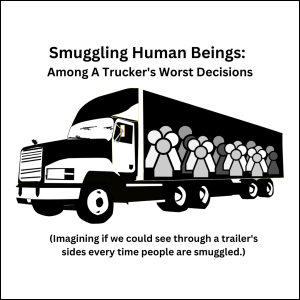 I feel compelled to define a couple of terms and then cover some information about this topic from the trucking industry’s perspective.

I have found the following defintions of smuggle and smuggling (none of which may be the “legal” definition):

I see in 3 of these 4 definitions that the smuggling definition directly involves illegal activity.

I have found the following human trafficking definitions:

I hope that you can see based on these definitions that the two terms — smuggling and human trafficking — are not interchangeable, although the former can lead to the latter.

I read the Wikipedia article linked above and saw “various motivations to smuggle.”

I found that most of the motivations have to do with smuggling “goods” and “things”.

Three of the motivations regarding people include: “prostitution, human trafficking, kidnapping”.

I have read and reported since 2017 about two potential reasons for smuggling human beings:

1. The desire to truly want to help people find a better way of life; and

2. The desire to be paid money for each and every person transported.

I believe regarding Point #1 above that while it is commendable to want to help people, that help needs to be legal.

I further believe regarding Point #2 above that earning money off the potential for human suffering is wicked.

I know of no circumstance in which a trucker knowingly smuggled humans without being offered payment for his/her services.

I have also raised the question as to whether some truckers become involved in smuggling without their knowledge.

This might happen if one’s trailer doors are not locked and illegal aliens climbed aboard while the truck was stopped.

To help prevent access to cargo inside a trailer, some truckers use:

I believe that deliberate smuggling with knowledge is completely different from someone hitching a ride (being a “hitchhiker”).

I have seen articles, photos, and even videos of hitchhikers doing the following:

I have stated over and over again that one must never ever treat one’s fellow human beings like cattle or cargo.

In fact, smuggling humans in the back of a trailer that is being transported can lead to:

I ask you to consider the interior of two common types of trailers used in smuggling people:

I know of no one who wants to be treated to either of these extremes!

I would like to get back to wisdom from centuries ago regarding a proper perspective on humans.

In the Bible, in Genesis 1:26-27, we read that the first man (Adam) was created by God — in His image — and then God created woman from man.

In The Declaration of Independence, we read in part:

… We hold these truths to be self-evident, that all men are created equal, that they are endowed by their Creator with certain unalienable Rights, that among these are Life, Liberty and the pursuit of Happiness.–That to secure these rights, Governments are instituted among Men, deriving their just powers from the consent of the governed, …

So, God created man in His own image and each human being since then has been endowed with unalienable rights by God.

I need to point out that when a right is “unalienable,” that means that it cannot be taken away from or given away by the possessor.

I believe that one type of thinking that can lead to smuggling occurs when the smuggler thinks that he/she is more important than those being smuggled.

The Apostle Paul wrote to the church at Rome (in Romans 12:3) that we are not to think of ourselves more highly than we ought, but to think of oneself with sober judgment, according to the measure of faith God has given you.

I think you would agree with me that when one thinks
– more highly of himself/herself
– than he/she thinks of others,
the potential for exploiting the person in the “lower” position can creep in.

I have written before this warning: Being Exploited: Unscrupulous Trucking Companies Trap Truckers.

Can you see that smuggling is a violation of the “Golden Rule” — to do unto others as one would have others do unto them?

I summarize that smuggling people is a failure to love one’s neighbor as one loves oneself!

Penalties and Punishments for Smuggling Humans

I further speculate that the penalty or punishment for smuggling varies based on the outcome of the event.

For example, if any people died during the smuggling process, the smuggler may be charged legally for the murder of each and every person who died.

For your convenience, I have linked here to a law office’s question:
“Murder, Manslaughter, or Homicide – What is the difference?”

I am taking the liberty of listing here some of the most recent articles about truckers being involved in smuggling people (as of the time this article is being written):

In at least one case, authorities may seek the death sentence as the penalty for smuggling.

Again, if you really want to help people, do so legally and ethically, not putting anyone’s health or life in jeopardy.

I urge you to consider that engaging in smuggling or human trafficking as a professional truck driver can lead to the loss of:

Distracted by a Bee in Your Truck?