Are there things only humans can do? 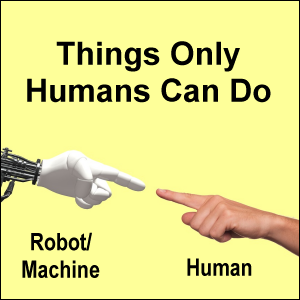 An April 12, 2014, article on AutoEvolution.com entitled “Toyota Replacing Some Factory Robots With Humans To Increase Quality” has a couple of interesting points:

Relying on robots to make your vehicles has advantages and disadvantages. Yes, its good for rapidly producing cars because robots are more accurate in what they do than humans, but there are things only humans can differentiate.

… Regarding the “sticky accelerator pedal case”: You need humans to assure each vehicle comes out as it should be, and the automaker is now bringing them back.

We previously published an article about “driverless trucks” and wrote that a long list of things would have to be engineered into articulated trucks “Before the technology of driverless trucks is fully adopted”.

If only a human can differentiate certain things in the automobile manufacturing process — or assure that each Toyota comes out as it should be — what makes some people in the trucking industry think that they can do away with professional truck drivers by using fully automated trucks?

Wouldn’t operating a Class 8 truck on roadways be among the things only humans can do?

In response to the quote from the article — “We cannot simply depend on the machines that only repeat the same task over and over again. To be the master of the machine, you have to have the knowledge and the skills to teach the machine” — how can you teach a machine things that only humans would know or understand?

Note: This article — which was originally written and published on April 10, 2014, by Vicki Simons — was updated slightly in 2018.

Return from Things Only Humans Can Do to our Truck Operations page or our Truck Drivers Money Saving Tips home page.

Truckers’ Pet Travel and Saving Money in a Big Truck

An Annual Flu Shot: Should Truckers Take the Risk?