If your truck mirrors do not fold in, you may have difficulty parking in tight docks. 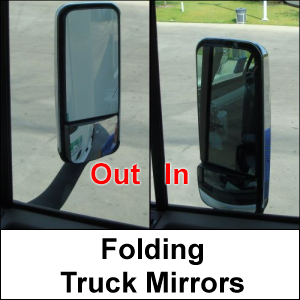 The driver who parked in the dock immediately to Mike’s left found that because of the closeness of their trucks, at first, he could not get out of his!

Even as a fairly thin man, this driver had to wiggle and squirm to get out.

If he had been any larger in frame, he would not have been able to exit — except perhaps through a window, which would have been awkward.

He did not have the kind of tractor with a sleeper door and even if he did, exiting through that might also have been awkward.

This is an illustration of two trucks in widely separated docks.

This is an illustration of two trucks in narrowly separated docks.

The extensions on either side of the illustrated tractors represent their mirrors.

Do you see how close the illustrated mirrors are in the narrowly separated dock?

Can you see how the mirrors might bump against each other when one truck’s door is opened?

The Need for Folding Truck Mirrors 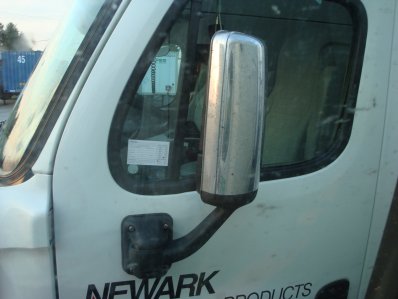 Once, when we were at the Greensboro terminal of Mike’s trucking company, he had to back under a trailer that had been parked too close to another trailer.

As it turned out, the tractor under the trailer to his right had folding truck mirrors.

So Mike took the liberty of pushing in the driver side mirror long enough to back under the trailer, connect to it and pull it out so he could move past it.

From the passenger seat, the photo here shows what the set-up look like once he backed under the trailer.

Since Mike was driving a Freightliner Cascadia at the time, he could also have pushed in his passenger side mirror.

But we’ll get to that below… 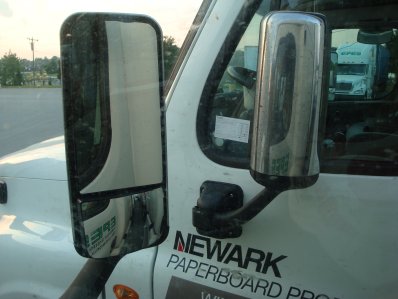 Let’s get a handle on what kind of space we’re talking about here. 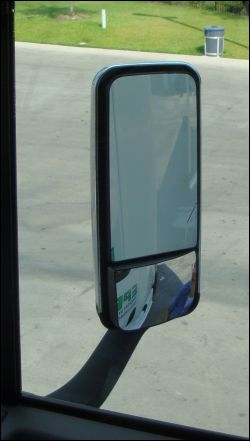 This photo shows the passenger side mirror on Mike’s truck fully extended.

This is the position used for driving.

You can see the lower edge of the window frame at the bottom of the photo. 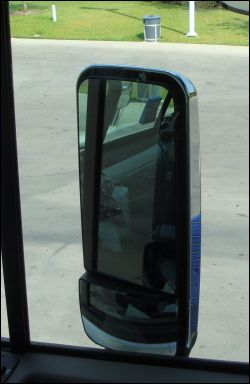 Here’s what the truck mirror looks like folded in. 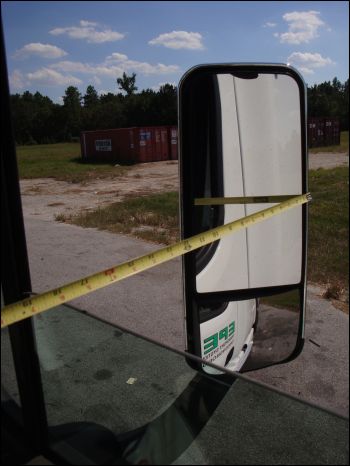 Vicki measured the outside edge of the folding truck mirror in its extended position to the window as a point of reference. 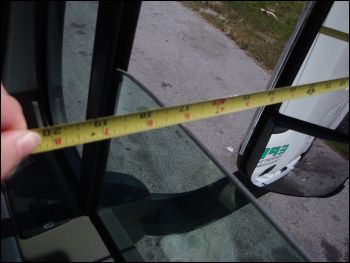 This close-up shows that the outside edge of the passenger side folding truck mirror was 17 inches from the window. 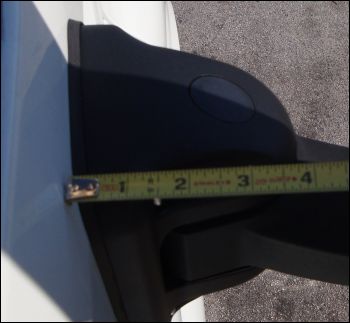 Next, Vicki measured the mirror’s support, where the folding mirror hinges.

It is less than 4 inches wide from the side of the truck.

When the mirror is folded in, the outside edge tucks within this 4 inch distance.

So the distance from the truck’s edge goes from 17 inches to about 4 inches when the mirror is folded in.

Parking in tightly spaced docks and backing under trailers parked too closely to each other may be only two of the situations we’re aware of where drivers can utilize folding truck mirrors.

We’ve never heard of drivers needing to fold in their mirrors in order to go through a truck wash because at all of the truck washes we’ve ever been to, the workers wash the mirrors on all sides in their fully extended positions.

Still, the folding aspect comes in very handy at helping you save the cost of a dented or damaged mirror in the situations we’ve mentioned.

Money saving tip: It makes perfect sense to have folding truck mirrors on your truck for those times when you’re in tight spaces and every inch counts.

Here are the results of a search on Iowa80.com for heated mirror, the costs of which range based on the part.

Not only will there be the cost of replacing the mirror or frame or both, but there will be down time associated with the repair when a mirror is damaged.

Someone may even have to call a shop to make an on-site repair.

Depending on where it takes place, the collision may not be ticketable as a moving violation (especially if it happens on private property).

However, there may be some significant financial repercussions.

For instance, if you report the incident to your trucking company, they may count the incident as preventable and it could go in your record or on your DAC report.

We’re not saying it will, just that it could.

As a professional truck driver, you want to protect your record at all costs.

And now that CSA 2010 is being foisted upon the trucking industry, you will want to be very careful how you handle your truck as you don’t want any points to accrue against you.

Return from Truck Mirrors that Fold In: The Benefit of Folding Mirrors to our Truck Parts page or our Truck Drivers Money Saving Tips home page.