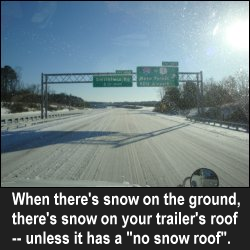 On April 11, 2018, Vicki Simons had an idea for a no snow roof, no snow trailer roof, no ice roof, or no ice trailer roof as she was reading an article about a trucker who was ticketed for having an overweight truck when he clearly showed a scale ticket showing that his truck had been legal.

The trucker asserted with the Iowa DOT officer at the weigh station that the accumulated snow and ice on his trailer’s roof was to blame for being overweight.

To be honest, Vicki understood the situation from the perspective of both the trucker and the DOT officer.

Thinking Outside the Box About Snow on Trailer Roofs

That’s when Vicki asked out loud why trailer manufacturers don’t just design some kind of a thin network of wires that could be warmed to melt snow and ice off the entire roof of trailers. 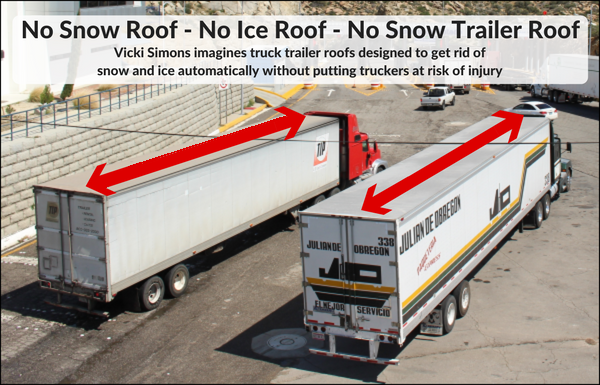 The Problems With Snow and Ice on Trailer Roofs

There are a number of problems with the current set-up:

Why Not Just Melt Off Snow and Ice?

An obvious solution is: Why not just melt off all frozen precipitation from a trailer roof?

Vicki imagines the design and installation of a thin waterproof “mat” with a low-watt heater screen embedded in it that will warm up the roof so that the snow and ice melts off — much like a waterbed heater.

To help you picture this device, here is one such waterbed heater listing from Amazon.com, with which we have an affiliate relationship.

By having such a heated trailer roof installed, the trucker can get rid of snow and ice automatically without having to

Vicki thinks that having a device installed that keeps snow and ice melted without driver intervention would be great!

Potential Names of the No Snow Roof

Imagine how a trailer manufacturer could market their trailers with such a device installed:

Potential Design Ideas for the No Snow Roof

Vicki is not an engineer and does not know how to go about designing such a device or tool.

However, she has driven a commercial motor vehicle (CMV) in the winter and has ideas about how such a device should be constructed.

Placement for No Snow Roof Controls 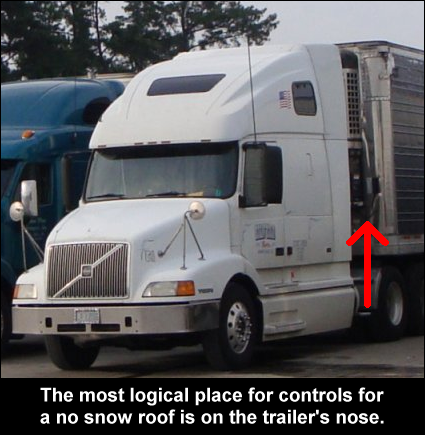 The most logical place for controls for a no snow roof on a trailer is on the nose, near where the driver hooks up his/her air hoses.

Your Feedback Is Requested

What do you think, truckers?

Would you like to have this kind of technology on the roof of every trailer you haul during snowy and icy weather?

We would like to hear your feedback — including any features that Vicki hasn’t thought of.

Also, if you want this technology on your trailer roofs, don’t keep this a secret! Share this page on social media and with your trucking company.

When there is enough of a demand, trailer manufacturers will find a way to make the “no snow roof” technology a reality.

Thanks in advance for sharing.

Return from No Snow Roof – A Solution for Eliminating Snow and Ice on Trailer Roofs to our Truck Operations page or our Truck Drivers Money Saving Tips home page.

Comments to FMCSA on Broker Transparency

On Falsifying a Log Book Entry as a Professional Truck Driver

Truck Mirrors that Fold In: The Benefit of Folding Mirrors