we want to jump up and cheer!

What is “Whistle Blowing”? Who is a Whistleblower?

According to this document,

A “whistleblower” discloses information he or she reasonably believes evidences: 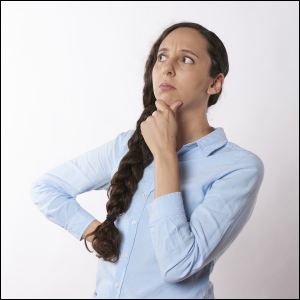 Question: When would a professional truck driver ever need to “blow the whistle” on the job?

Answer: Whenever he or she is being required to do any of the things listed above (which could have a potentially limitless number of applications).

Just because a trucker is protected under the law does not mean that he or she will not have some short-term pain.

Here are specific instances in which truckers spoke out, took a stand, were retaliated against and were later vindicated:

Why Trucking Companies Ask Truckers to Violate Law or Safety 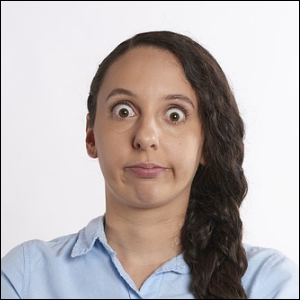 Sometimes the eagerness of trucking companies — or those who work for them — to get freight delivered overrides their common sense in making sure that it is done safely and lawfully.

Each professional truck driver is responsible for the operation of the truck entrusted to his/her care.

If it is dangerous to drive, then driving should not be attempted.

If you’re being pressured, a good dose of whistle blowing may be needed.

You may reference the Federal Motor Carrier Safety Administration’s Rules and Regulations any time online.

Below, we are going to share some photos and explain three situations Mike was in (when Vicki was riding with him full-time) that could have potentially become situations under which whistle blowing was called for (but fortunately were not).

We’re sharing these to help you stay mentally alert to potential situations of your own. 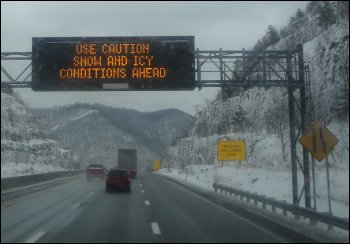 “USE CAUTION
SNOW AND ICY
CONDITIONS AHEAD”.

Use your own best judgment when/if you drive in conditions like this.

Check weather forecasts — especially if you’re going to be traveling in hazard-prone areas. 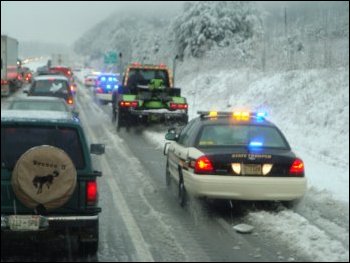 We were northbound on I-75 and approaching the last exit in Tennessee — which just so happened to have a truck stop — in the middle of a snowstorm.

The snow dumped so hard and fast that law enforcement eventually closed the exit before we got there.

This was also supposed to be the exit where we were getting off to get to Mike’s next shipper.

Mike’s driver manager wisely told him it was his call about driving.

Mike had to cross over into Kentucky and park until the weather cleared a bit. 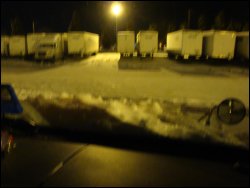 This night-time photo shows how much snow dumped on Mike’s hood overnight.

He was asked to take a load from Greensboro, NC, to a place along I-95 near the NC/VA state line.

Travel advisories had been posted for quite some time.

Vicki doesn’t get nervous often, but this time, she was. 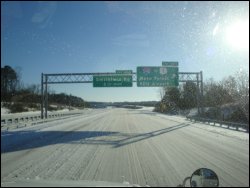 Yes, the sun was up and we were on a major road in North Carolina, but where was all of the traffic?

This had been one huge snowstorm!

One source said that Greensboro got a total of 6.4″ of snow in that storm, which is pretty amazing since the Southeast Regional Climate Center says that entire annual amount of snowfall for the area is 9.2 inches.
capitalclimate.blogspot.com/2010/01/southern-snowstorm-threatens-few/ (no longer online)

Vicki lost count of the number of cars she saw whose drivers had lost control and spun off in the ditch on both sides of the road. 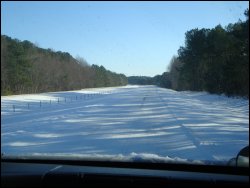 This major road was also deserted, as well it should have been with as much snow that fell.

The travel advisory was still in effect.

It would take hours for the road crews to plow the road or for the temperature to warm up sufficiently to melt the snow. 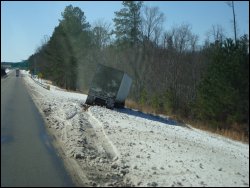 Vicki took this photo along I-95.

The truck shown — way off the shoulder — was the only commercial motor vehicle we saw that had trouble in this storm.

With a lot of prayer and extra cautious driving, Mike made it safely to his destination. 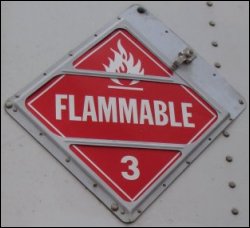 In March 2010, Mike was assigned a hazardous materials load that required the placement of a couple of placards on the trailer, one of which is shown here.

Every entity associated with the load is responsible for its handling, especially the driver.

For more information, please see How to Comply with Federal Hazardous Materials Regulations. 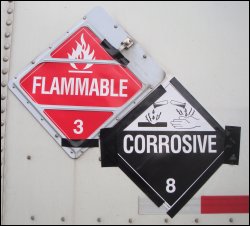 Before you haul a hazardous materials load, make sure you know and follow all of the rules and regulations associated with its transportation.

Although Mike applied the placards to the trailer correctly before he started out, at least one of them blew off.

He had to get another placard to replace the missing one, but with the second set, he made sure they would stay in place by applying some tape.

What Doesn’t Qualify as Whistle Blowing? 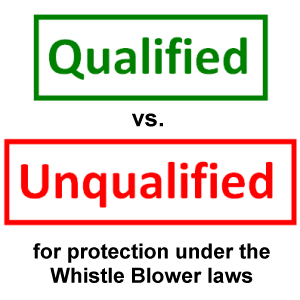 Please note that certain criteria must be met in order for you to have standing under the whistle blower laws.

You can’t just refuse to do your job because you don’t want to do it.

A couple of Mike’s former co-workers fired themselves (!) because they didn’t want to do the jobs they were assigned.

you may want to either hire on with a different company that has freight going to different areas or you may not want to become a truck driver at all.

Money saving tip: Never bow to the wishes of someone inside your company when he or she wants you to do something illegal or unsafe.

The whistleblower laws are in place to protect you (U.S. law only).

The United States Department of Labor has a special website called WhistleBlowers.gov with all of the details about Employee Protections under the Surface Transportation Assistance Act (STAA) 49 U.S.C. §31105.

The FMCSA used to cover this part of the law and perhaps has moved it elsewhere on its site.(3)

Should you be asked to do something illegal or unsafe on the job, mention this to your supervisor.

If he or she will not listen to you, you may wish to pursue the matter one management level up.

If you are being asked to do something unsafe, you may wish to appeal to your trucking company’s Safety Director.

Mentioning the possibility of whistle blowing at the beginning may not be the best course of action when you’re talking with people in your trucking company about an illegal or unsafe action they’re asking you to do.

If you have a law firm on retainer, we recommend that you consult with them first before engaging in whistle blowing, just to get guidance.

You may need their help later on if you’re retaliated against.

Remember, you as the professional truck driver are the person who is going to be driving the truck, taking the load, navigating the highways, etc.

Protect yourself, all of your things in your truck, the truck you’re driving, the trailer you’re hauling and the load you’re carrying.

Don’t risk your life, your CDL or your career because you feel intimidated.

You may really need the money, but which is more important, the miles or your life?