Mike had one local truck driving job where two of his co-workers were fired in mid-2011. 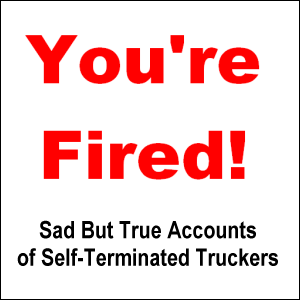 The truth be told, they acted in such a way so as to fire themselves!

We hope that the accounts on this page serve as a warning to every professional truck driver on what to avoid regarding one’s job.

You would think it would be obvious, but apparently some folks need to have it spelled out…

Refused to Do Job

One driver — whose name we are going to abbreviate to “R” — had gotten himself in a bit of hot water by not reading the company manual and taking an unauthorized passenger with him in the truck.

He further complicated matters by taking his company-issued truck on a restricted road and getting a $500 ticket.

It just so happened that Mike trained “R” when he first started to work at Mike’s trucking company.

Mike had told him to do a good job and to take whatever they assigned.

All of the drivers at that company are paid on an hourly basis, but the hours are available so that drivers can make a decent paycheck every week.

By way of background, the company made a decision about that time to eliminate overtime. This affected everyone at the terminal (Mike included) and there was a bit of turnover when the paychecks suffered. After a few weeks, the company re-evaluated its position and re-instituted overtime for some drivers (Mike again included).

One day not long after overtime had been re-instituted, Mike heard another driver tell about what happened to “R.”

Supposedly, “R” walked into the office on Monday morning, looked at the paperwork for the load he was supposed to haul that day (which had already been loaded on his truck) and walked out — without a word to anyone.

Now we don’t know what was going through his mind, but that was not an honorable thing to do.

Even if all of the runs assigned to him were local and there didn’t appear to be many hours there, “his” truck was loaded and ready for him to deliver product to the intended customers.

He should have taken the load assigned to him, but he didn’t.

In other words, “R” refused to do the job he was hired to do and neglected his job responsibilities.

So, on Tuesday morning, the office manager was overheard telling “R” on the phone to just stay home.

In other words, “You’re fired!”

What other choice did management have?

Now, there are times when a driver knows that it is literally not safe to drive — such as during a blizzard or in treacherous driving situations.

But we’re not talking about safety here; we’re talking about the choice that “R” made not to do his job, the actions of which landed him in “fired” status.

There was another driver who had been hired about the same time whose name we’ll abbreviate to “Z.”

This driver had a habit of wanting time off here and there or a day or two off work periodically.

Another driver with the company had to cover the load.

What a disgraceful way to get terminated.

Refused to Turn In Truck

Once when we were driving for Swift, we had to go pick up an abandoned tractor in Gas City, Indiana and take it to the nearest company terminal (which at that time was in Ohio).

Vicki drove the truck we had been assigned (pulling a trailer behind it) and Mike drove the tractor (bobtail) that had been abandoned.

Interestingly, the driver who left the truck “hid” the key in a place that could easily have been found by anyone interested in taking it for a joy ride.

If you’re looking for a sure way not only to be fired (and ineligible for rehire), abandon a truck.

We’ll point out other ramifications below.

Who Wants to Hire a Fired Trucker?

Chances are good that “R” and “Z” are going to have a hard time finding another truck driving job.

After all, who wants to hire someone to drive who refuses to do the work assigned, neglects job responsibilities or fails to complete tasks?

As the saying goes, “Confidence in an unfaithful man in time of trouble is like a broken tooth, and a foot out of joint.”*

Most likely, they can kiss all the money that they spend on truck driver training school goodbye.

(That is, unless they find some fly-by-night trucking outfit that doesn’t care who they hire and exploit. However CSA will probably weed out those companies by and by.)

Learn in advance what it means for trucking companies to have “forced dispatch” and what happens if you refuse to do your job for no apparent reason.

You need to continually be in touch with your supervisor or fleet manager or driver manager.

If you have an emergency, explain it.

If you have sickness or death in the family, let someone know.

But don’t just walk off the job.

And no one can afford that in today’s economy.

Money saving tip: Do not risk your truck driving job or career by refusing to do your job without apparent reason.

If you want to be “picky” regarding the loads you haul, the customers you haul for and the days you work, become self-employed or preferably independently wealthy.

Remember that being fired does not just affect you today, but most likely shows up on your DAC report.

Today’s employers have ways of finding out whether or not you’ve been truthful on your job application.

If they find out later that you have been dishonest in not giving your complete employment history for the last ten years, you can still be fired, even though you may have no other marks against you with that company.

Truck Driving Jobs and Truck Driver Jobs in the Future