In the course of his work, Mike Simons encountered a truck trailer that needed crank handle repair. 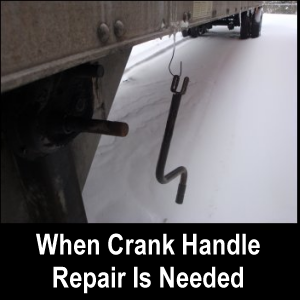 We’re talking about a handle completely detached from the trailer.

Without the necessary hardware to make an immediate repair, he made a temporary fix (just long enough to get him where he needed to go) and then a permanent one.
We’ll explain… 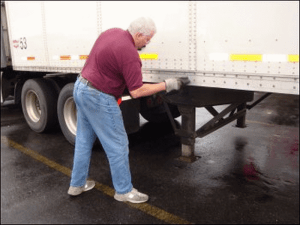 The vast majority of the time, most drivers raise and lower a trailer’s landing gear without any problems.

Here, Mike Simons adjusts the height of the landing gear on his truck’s trailer. 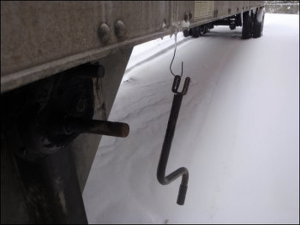 This trailer has a crank handle completely detached from the landing gear. 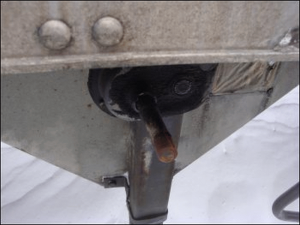 The shaft from the landing gear that the crank handle fits over is completely empty.

Mike inserted a screwdriver through the holes in the crank handle and landing gear shaft to act as the bolt that normally connects them.

In this particular case, he used a Phillips head screwdriver as the tip of its shaft is narrower than that of a flat head version.

This is a different view of the screwdriver being used in a temporary fix for crank handle repair.

Chances are good that with the torque being applied, the screwdriver will not fall out, but watch for it nevertheless. 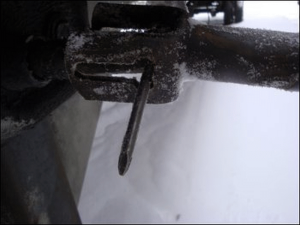 The bottom side of the crank handle through which a screwdriver has substituted for a bolt when the bolt is missing. 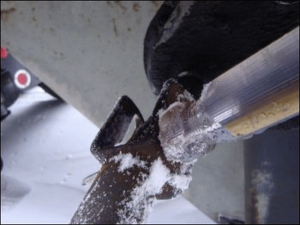 The top side of the crank handle through which a screwdriver has substituted for a bolt when the bolt is missing. 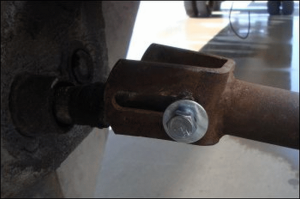 This photo shows a new bolt, about 3 inches long, which has been used for crank handle repair.

It was inserted through a washer and then through the holes to connect the landing gear shaft with the crank handle.

Then, it was fastened in place with another washer and then a nut.

This is the view from the head of the bolt. 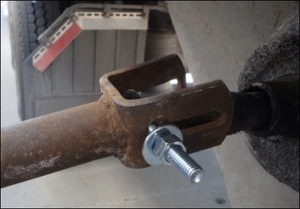 This is the view of the new bolt inserted through the holes to connect the crank handle to the shaft of the landing gear from the shaft end of the bolt.

Notice that there is plenty of shaft left on the bolt. Perhaps a bolt with a slightly shorter shaft would have worked just as well.

Whatever you do, don’t get a bolt that is too short!

Here is the side view of the new bolt-washer-washer-nut assembly used for crank handle repair.

Instead of just hand-tightening, Mike used tools to tighten the assembly.

Mike visited a chain hardware store to obtain the nut and bolt assembly as well as two washers.

All together, the cost to make this crank handle repair (apart from his time) was about $0.97.

One advantage of having a longer shafted bolt is that the nut is not as likely to work itself off as it would a shorter shafted bolt.

Mike says that in all his years of driving, he has had to make a crank handle repair like this very rarely.

For what it’s worth, we have never seen hardware like what was used here for sale at a truck stop.

Money saving tip: There’s a trade-off between carrying and not carrying rarely used hardware with you in your truck.

The former allows you to make repairs such as a crank handle repair quickly and easily.

The latter means that you’ll probably have to stop somewhere along your route and buy it.

For smaller repairs like this, it makes no sense to call a service truck and rack up the charges associated with that.

It pays to carry some basic tools and equipment with you. What if Mike hadn’t had even a screwdriver with him?

For those times when the crank handle is missing altogether, you may be able (although we don’t recommend it) to slowly and painstakingly rotate the landing gear by turning the screwdriver when inserted in the holes in the shaft.

This is especially difficult if you are lowering your landing gear in preparation for dropping your trailer.

Don’t strain your back.

And remember that the shaft of a screwdriver wasn’t meant for horizontal applications; it was meant strictly for rotating vertically.

We’ve never heard of a screwdriver snapping from being used in this way, but it is a possibility.

Beware of potential injuries from doing this.

Another temporary stopgap is “borrowing” the crank handle from another trailer temporarily — as long as you put it back when you’re done with your immediate task.

Get permission from whomever you need to get it before doing this.

Finally, if other drivers are nearby, you may ask them if they have the kind of hardware you need to make this repair.

If they do and the cost is not too expensive, you may choose to pay for that. You just might make a new friend in the process.

Return from Crank Handle Repair for Your Truck Trailer’s Landing Gear to our Tricks of the Trade page or our Truck Drivers Money Saving Tips home page.

Load Locks: Their Purpose and Limitations