All forms of life depend on water, including the human body. Drinking water ensures that all of our individual body’s systems are properly hydrated and we are able to function to our full potential. 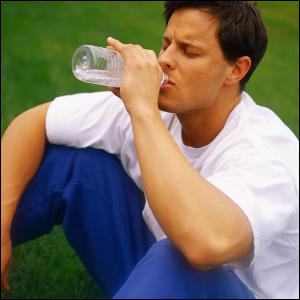 We will cover some facts about this “universal solvent” and share some of the many health benefits of drinking water.

If you are a professional driver, please be aware that a sedentary lifestyle and failure to consume good old H2O are two of the culprits (along with high sodium diets) behind a rise in the incidence of kidney stones in children.
bio-medicine.org/medicine-news-1/Kidney-Stones-in-Children-on-The-Rise–U-M-Expert-Says-44525-1/ (no longer online)

Since your job requires you to sit for long periods of time (an indication of a sedentary lifestyle), you can help prevent the onset of kidney stones and other medical conditions by addressing the other two culprits.

Water delivers useful products throughout our bodies and clears away the waste products. You cannot survive long without it.

Since we lose water through breathing and eliminating waste, we must replace it.

Factors such as exercise, health conditions and climate can cause the need for additional fluid replacement.

For example, here’s one of our personal stories…

The weather was incredibly hot the day that Mike had some extra outside work to do in moving trailers.

Vicki warned him to take frequent breaks and keep up his water intake. But he kept pushing himself.

Later, while we were taking a shower at a truckstop, Mike’s body had had enough and he threw up.

Was his reaction brought on by overheating or dehydrating? We do not know.

We figure that he may have had a mild heat-related illness approaching, if not actually being, heat exhaustion.

Following our shower, we ate in the restaurant in the truckstop and Mike made sure to have plenty of drinking water to replenish what he had lost.

There are problems associated with extremes in both directions:

both of which have symptoms that it would be wise to know. 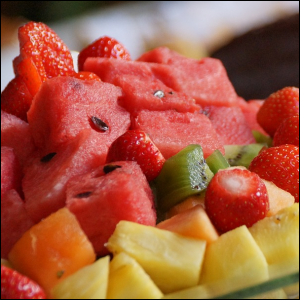 Some foods contain a high percentage of water. For example, cantaloupes are 90 percent water, watermelon 92 percent, and cucumbers 96 percent.

Depending on which foods you eat, the water content may be as much as 20% of your total water intake.

The following have been listed as health benefits of drinking water:

For a while, we had a next door neighbor named Lisa. She was constantly drinking soft drinks (soda pop).

One day, we were beckoned to her home by her oldest son. We found her in the floor writhing from abdominal pain.

She ended up being taken by ambulance to the hospital. Her body simply could not function properly when her only non-food beverage choice was loaded with caffeine and sugar.

We urge you to steer clear of colas as much as possible. One Doctor of Osteopathy called soft drinks “disease in a can.”(1)

In early 2010, he compiled some statistics on soft drink use that are hard to believe but true.

According to The Center for Science in the Public Interest:

Among other effects, the caffeine in coffee and tea increases the rate of urination, causing increased fluid loss.

Years ago, we went on a weekend camping trip with friends. At that point in her life, Vicki had been consuming a lot of iced tea.

Voluntarily separated from her access to tea, she developed a terrible headache that lasted for days.

She determined that her body had developed a dependence on the caffeine — an “addiction,” if you will — that when cut off was like withdrawal.

Once that revelation came to light, she determined to avoid tea and soft drinks (especially those with artificial sweeteners).

There is an old saying about drinking water, that one should drink eight 8-ounce servings (64 ounces) per day.

None of the research we reviewed determined that as the magic number.

You will need to consume the amount that is right for your height, weight, health condition, climate and level of activity.

In writing this article, we are making the assumption that you have access to at least one good, safe, clean water supply.

If you do not, you will want to make arrangements to get one.

Apart from the standard sources, there are devices such as dehydrators and atmospheric water generators that condense water from the air.

Do your homework before buying such a product.

There are various types or sources of water available:

There may be health risks associated with certain types of water filters, treatments or containers.

We plan to discuss separately the health issues associated with drinking bottled water.

Know in advance the risks involved in drinking water for the supposed added health benefits purported by the manufacturer or distributor.

Is it worth it to you to drink water that has supposedly been oxygenated or to which vitamins or minerals have been added?

Some people don’t like to drink water because it lacks “taste.”

Simple ways to overcome this are by using non-sweetened water flavors and the herbal sweetener named Stevia (which is much, much sweeter by volume than sugar or artificial sweeteners).

This is the organic stevia powder that we like and use in some beverages, which is available through Amazon.com, with which we have an affiliate relationship:

Have you ever tried a fruit concentrate mixed in with your drinking water?

We personally like to add a citrus essential oil to water in a “glass glass” (not plastic). A glass measuring cup might work well for this.

How “dirty” is your water? Do you know what’s in it?

A March 10, 2008 New York Times article cited an Associated Press article which was “drawing attention to the widespread problem of trace amounts of pharmaceutical chemicals turning up in the drinking water supply of millions of Americans.” 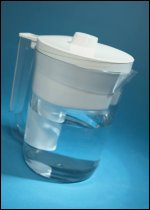 Due to the potential presence of

in drinking water, there is a huge market for water filters and water treatment.

Each one supposedly has its own strengths. Some of them need to be replaced periodically; others can be cleaned and used again.

Know what you’re getting before you buy it.

In the past, we used a Brita water filter at home (never in our truck). To us, it seemed as though the lifespan of the filter inside the pitcher was way too short.

We have used a British Berkefeld water filtering system both at home and in the truck.

If you wait until you’re thirsty to consume drinking water, you may already be slightly dehydrated.

It is better to sip water throughout the day based on your body’s needs.

When he was on the road as a regional truck driver, Mike filled his large, blue Bubba Keg with ice and drinking water every morning before breakfast.

He sipped from it all day while driving and recharged it as needed.

According to the University of Washington’s “Brain Facts and Figures,” 77%-78% of the human brain is water.(2)

If you find that you can’t concentrate (such as

check your water consumption. You may need more than you have been drinking.

One indicator that Mike uses to determine whether or not he is consuming enough drinking water is by the color of his urine.

If it is light yellow or straw-colored, he knows he’s getting enough.

If it is dark yellow or orange, he knows he needs more water to drink.

While you may want to consult a Urine Color Chart, do not allow the color of your urine to be your sole determination on the amount of water you drink.

Money saving tip: Many people are hospitalized each year because of dehydration.

Just from a financial standpoint (not even including the burden on your body), you cannot afford to be dehydrated.

Numerous sources of drinking water remain very inexpensive, so make sure that you consider this as a component of your investment in total health and wellness.

To help alleviate the tastelessness of water, you can try adding a squirt of fruit juice (whether concentrated, from concentrate or reconstituted) to your drinking water.

Return from On Drinking Water: For Trucker Bodily Needs and Health Benefits to our Health and Wellness page or our Truck Drivers Money Saving Tips home page.

Portable Toilet 2: Reasons to Consider Having One in Your Truck

Prepare Thanksgiving Dinner Frugally in Your Truck on the Road

How to Patch Jeans: Trucker’s Wife on Patching Jeans With Holes