Fishermen bait their hooks or use lures to catch fish. 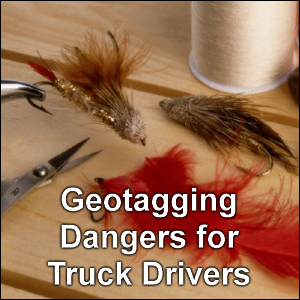 Similarly, those who geotag their locations are (perhaps unwittingly) baiting or luring others to “catch” them.

This practice of geotagging may be fine for lots of people, but it can be dangerous for professional truck drivers.

Consider the nature of your job — hauling oftentimes expensive freight from place to place, in an expensive truck, in public places.

Disclaimer: As we address this issue, we are being very careful not to link any specific professional truck driver to evidence that could incriminate him or her. It should be noted, however, that any “evidence” in text here is already publicly available and can be traced or tracked. (That’s how we found it.)

Furthermore, the “searches” that we do provide links for are the kind that anyone can do — especially those intent on doing truckers harm.

Our concern about truckers using services to geotag their exact locations has grown since August 2011, when Vicki tweeted this to another Twitterer (account name omitted):

Honest question: Does giving your exact location make you or your vehicle more of a target for theft or a hijacking? Thanks.

We never received a reply. But it turns out this Twitterer is not alone.

Lots of people regularly send out updates through Foursquare and Twitter on their whereabouts, including folks who have some aspect of trucking listed in their Twitter bios.

The sheer quantity of truckers engaging in this practice made us ask, “What entices people to geotag their locations?”

“The ultimate goal, of course, is to create a large geotagged database of information about the places people check in to—a kind of location-centric wiki. Other services have tried this in the past and failed; in Foursquare and Gowalla, the game is the hook that gets people to contribute.”

The Howcast video embedded on FourSquare.com’s website says that by using the service you can “unlock your world and find happiness just around the corner.”

All you need is Foursquare, a cell phone and a passion for exploration.

Anyone who has ever played a video game understands how exciting it can be to earn a big score.

But is playing a geotagging game innocent entertainment?

Just How Easy is it to Find Someone by Geotagging? 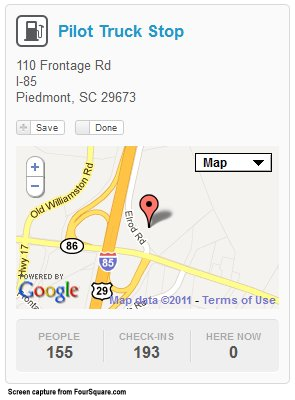 Vicki followed a tweet link from someone involved in trucking to find a Foursquare check-in.

The image that came up listed

The driver was at the Pilot Truck Stop in Piedmont, SC.

Note: Although we do not have a Foursquare account nor the technology to voluntarily geotag our locations, we assume that getting this same kind of information is available to anyone who chooses to use it.

The Danger for Truckers Volunteering TMI (Too Much Information) 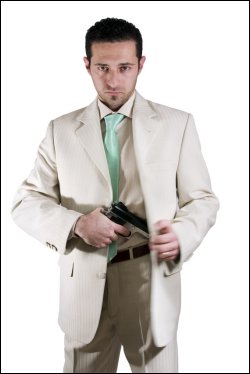 All we have to do is search Twitter for I’m at truck to get a pretty good idea of who stops at truck stops.

(Hey, if it’s this easy for us to find this info, consider what the professional criminals do!)

On November 3, 2011, we posted this quote to our blog from this article:

Monday’s theft occurred in a well-lit, secure parking lot that is monitored 24/7. The owner of the truck had been parking it in the same place for 20 years. The trailer was even equipped with an immobilizing device, and yet the thief was still able to drive away with the load.

We don’t know how the thief knew which truck to take or if the truck was even loaded. The point is that a theft occurred from a secure lot.

If that can happen from a secure lot, imagine truck thefts happening from unsecured lots — especially if too much information is shared.

Hidden Dangers for Truckers Who Geotag Themselves

Obviously, tipping off someone who you are (including all data in your Twitter bio and your Twitter stream) and where you are (your exact location) is an open invitation for theft, hijacking, armed robbery or something similar.

A second danger is that posting your information online for all the world to see could impact your trucking company, their insurance and your insurance.

Regarding trucking insurance, some companies may decide to exclude underwriting specific drivers or specific trucking companies based on their geotagging tendencies.

Regarding your own personal insurance being impacted by your geotagging, an October 13, 2011 article has the headline:

“In Few Years, Social Network Data May Be Used in Underwriting.”

Of particular note are these paragraphs:

… in a few years, automatically mined data from social networking sites could find their way into the underwriting pricing process. It could become a factor in determining premiums for both personal and business insurance, according to a new report from Boston-based research firm Celent. The report, titled “Using Social Data in Claims and Underwriting,” was published on Oct. 10.

If we may, we’d like to expand that to the Twittersphere when it comes to professional truck drivers: 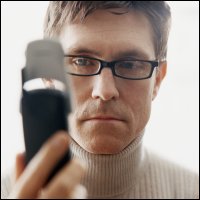 As technology progresses to the place where information about everything and everybody becomes more widely available, there is a need to be discreet.

That’s an old-fashioned word that means, “judicious in one’s conduct or speech, especially with regard to respecting privacy or maintaining silence about something of a delicate nature; prudent; circumspect.”

Based on this, an alternative saying for truckers might be:

In a worst case scenario, a geotagging professional truck driver who is involved in a theft, hijacking or armed robbery could be held liable — and then lose his/her job.

Are we going overboard on this?

On the one hand, we’re not saying that truckers are actually tweeting things like this:

But consider tweets like this (6-letter foursquare links replaced with ****** so as not to incriminate the users):

The folks who sent out these messages have “checked in” with 4sq.com many times.

In fact, you can find out where a lot of people are by searching Twitter for “4sq.com“.

Search Twitter for “4sq.com truck” and follow links to learn all kinds of stuff about people who stop at truck stops.

According to The Daily Beast,

“Social networks that broadcast your exact location make it easy for strangers to watch your every move—and become part of your life without you even knowing it.”

Just How Much Geotag and Other Information Can Be Traced?

Here’s the process Vicki used to find, for example, a likely person at a “tire” shop. She:

You can see this Twitterer’s picture and exactly where he is.

Furthermore, notice what it says: “Only Jeff’s foursquare friends can see comments and add their own.”

Perhaps he thinks that since only his friends can see comments that his info is secure. But it’s not.

Extrapolate that type of search and information to a professional truck driver. Imagine the danger of advertising on Twitter things like “finally loaded” or “parked for the night” or “time for a shower” or something similar.

It’s called flirting with disaster or just asking for a theft.

Even photos that have geotagging information attached can be traced, as ICanStalkU.com once showed.

A well organized crime ring watches for stuff like this and has relays properly spaced to watch drivers with certain kinds of loads.

If you think, “Oh, they won’t steal what I’ve got on board,” then you may want to read articles about cargo theft like this one from August 2011.

An October 25, 2011 article on GasBuddy.com ran an article — “McGruff Says: Take a Bite Out of Gas Station Theft” — revealing how a thief stole items out of a vehicle parked while the driver was pumping fuel.

This type of brazen and in-broad-daylight type of theft can be aided by truckers who geotag their locations. (1)

The Future of Trucking Regarding Geotagging Drivers

We wouldn’t be the least bit surprised if trucking companies soon start including it in their official policies that any driver caught geotagging while driving their equipment will be fired on the spot.

For now, we would like to believe that some truckers geotag themselves in innocence, not realizing the dangers.

But the information on this page is hopefully their wake-up call.

We trust that in pointing out these dangers, we’re helping professional truck drivers (and the companies that employ them) to save money.

We urge these professional drivers to abandon their practice of sending geotag messages (and photos) before harm comes to them, their trucks, the freight they are hauling, etc.

Money saving tip: For the sake of safety on the job, reveal your identity with your exact location only to your immediate family and those who have to know it in connection with your job.

No matter which social networking accounts you have, be aware that people are watching you.

This applies to both your personal accounts and your business accounts.

Man’s sin nature being what it is, remember to be on your guard against all kinds of evil and do not make it easy for a thief to steal from you.

Vigilantly lock up your tractor and trailer.

Trucker apps may be neat to play with and earning badges and points in a virtual game may be fun, but would you rather have the badges or your freight, the points or your truck, the game or your life?

Consider all of the times that Foursquare users have been “ousted” from their “positions” as “mayor” of various places and then translate that a criminal trying to “oust” you at gunpoint from your truck after you advertised your location.

It may never come down to that, but you can’t say it never will.

Protect yourself, your truck, your trailer, your load, your job and your life.

Truckers, Share Your Story about Saving or Spending Too Much Money

Cell Phone Use While Driving a Semi Tractor Trailer