Since our professional truck driving career began, the Freightliner Cascadia is the classiest truck either of us has ever driven or lived in. 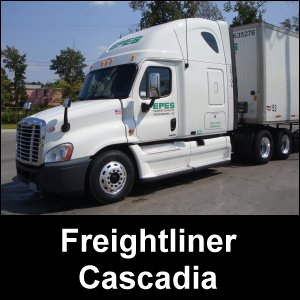 With that being said, the following is a list of pros and cons that we compiled when Mike drove the truck during his most recent regional truck driving job, when Vicki was riding with him full-time as his home support team.

Sometimes it is the little features of a truck that can help make it a little bit more like home.

Conveniences can help drivers save money.

We are therefore listing the pros, cons and other considerations of a Freightliner Cascadia.

Pros of a Freightliner Cascadia

Photo Gallery of the Pros 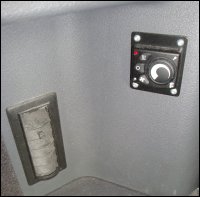 The vent and heater control panel for the unit under the bunk in the Cascadia from Freightliner. 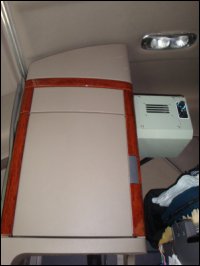 The top part of the storage cabinet behind the passenger seat.

Note: at the right of the cabinet, you will see a climate control unit installed. This did not come with the truck. 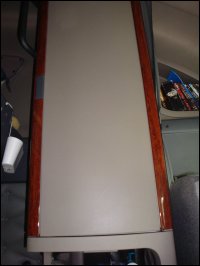 The storage cabinet with a door behind the driver’s seat. 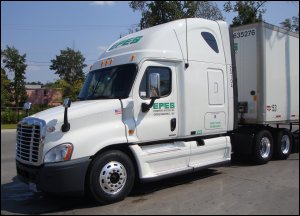 Although the Cascadia’s side mirrors are set lower, they are designed to fold in.

Cons of a Freightliner Cascadia

Photo Gallery of the Cons 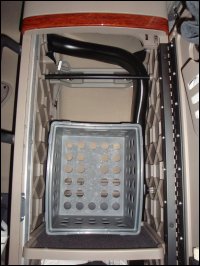 The ventilation pipe in the back and the closet rod spanning from side to side in the storage cabinet behind the driver’s seat.

We put a gray rectangular box in the closet so that clothing could be stacked. 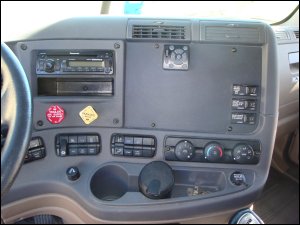 The dash in the Cascadia was re-designed with very little storage space and a deep well down toward the windshield. 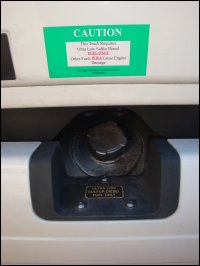 The fuel tank access area has been re-designed so as to prevent easy hooking of a rubber tie-down over an inserted fuel nozzle. 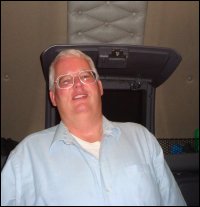 Tall drivers had better beware the door of the overhead storage compartment in the Cascadia. Mike always had to be careful when he stood up when the door was open.

Photo Gallery of Other Considerations 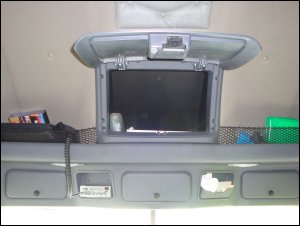 The overhead storage area was greatly reduced in this model truck. 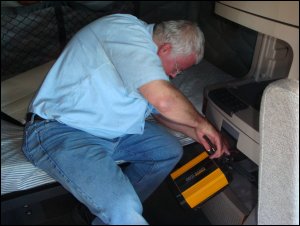 With the movement of the battery bank, the inverter had to be moved from under the bunk to the storage area behind the driver’s seat. 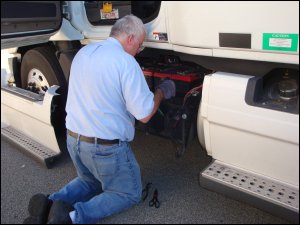 Freightliner trucks moved the battery bank from beneath the catwalk behind the cab to behind and below the driver’s seat.

The batteries can be accessed by removing a side fairing. This may help reduce battery theft. 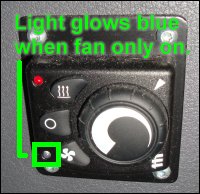 The bunk heater control panel glows a bright blue when the vent is on. 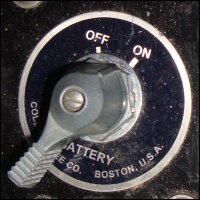 Freightliner trucks were redesigned so that the batteries can be disconnected at the turn of this switch.

This is a positive change.

There is a great deal of storage room (except for the area over the driver’s and passenger’s heads) in the Freightliner Cascadia.

A driver who is concerned about saving money on the road can easily outfit his/her truck with plenty of food, water, meal preparation items, clothing and other things from a customized packing list.

There is even room to place a well-stocked emergency kit.

We saved a great deal of money by cooking our own meals in Mike’s truck.

For climate control and electrification, we had to idle the truck more than we wanted.

If Mike’s company had had an APU installed, this would have lowered the fuel consumption and toll on the engine considerably.

It was in this truck that we began hauling two ice chests for perishable foods, which we kept full of ice that we made with our portable ice maker.

All we had to do was supply the power from the inverter and make sure it had sufficient drinking water.

We enjoyed organizing the space in the truck to make it more home-like.

It was hard to feel homeless when we lived in this truck.

Were we in the market to become long-haul owner-operators, we would seriously entertain the idea of buying a Freightliner Cascadia to drive.

Although it has its faults, the Freightliner Cascadia is still the best truck we’ve ever driven or lived in.

Return from Review of Freightliner Cascadia by a Pro Truck Driver and Wife to our Product Reviews page or our Truck Drivers Money Saving Tips home page.

Review of Automatic Transmission in a Freightliner Smartshift Truck