To prevent trailer movement, either a king pin lock or gladhand lock is most often used by trucking companies and professional drivers. 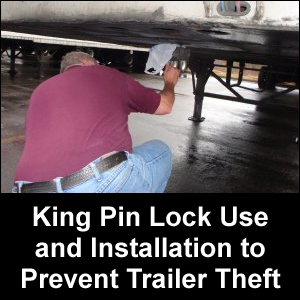 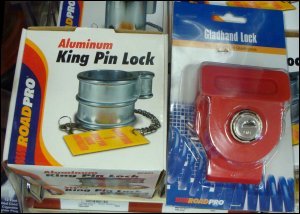 We have photographed various models of king pin locks, including those in use.

On this page, we will provide commentary.

This is a typical king pin on the underside of a dry van. The narrower section is where a tractor’s fifth wheel and locking jaws attach. It is also the place where a king pin lock grips. 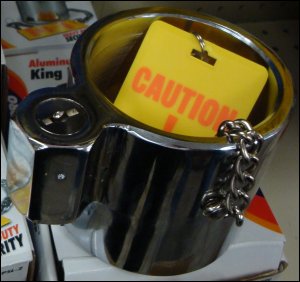 One of the most common reasons for using such a device — such as the Road Pro steel version shown here — is to prevent trailer theft.

Another use may be to prevent movement of an out-of-service trailer.

Many trucking companies have policies regarding dropping trailers at unsecured locations. You will always want to follow your company’s security procedures.

The issue of trailer theft is linked to but separate from freight theft.

Neither the king pin lock nor gladhand lock prevents ambitious thieves from stealing the freight on the trailer.

We gladly receive tips from drivers on how to prevent freight theft. 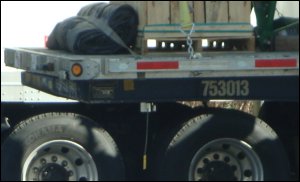 Mike says that installing something like a king pin lock on a dropped trailer is better than nothing.

Notice in the photo here that a king pin lock has been installed under a dropped flatbed trailer and that the tag is hanging from the attached chain.

Anything that will deter a thief or slow him down is worth consideration.

A thief may try to pick the lock, use a torch (which could set the king pin grease on fire) or cut the lock off.

We have never heard of a successful theft by any of these means.

Still, it is possible that king pin locks that use flat keys may be easier to pick than those that use curved keys.

The only other options for moving a trailer with such a device installed are by wrecker or crane.

Using either of these options makes it obvious that the trailer is being moved “by force.”

And when the tractor is not around, it’s a dead giveaway that something is wrong.

In truck stops in the southeastern United States, the most common king pin lock available is made of either steel or cast aluminum.

We imagine that it would be pretty hard to cut off a device so round and smooth because a grip would be needed.

Usually, the locks come with two keys and a warning tag that hangs from an attached chain.

Installing the locks is as easy as placing it over the king pin and turning the key to slide the locking mechanism in place. 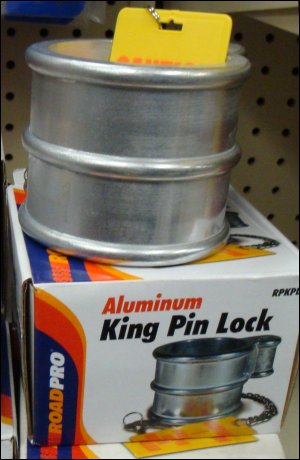 In this brand’s case — at least at the time these photos were taken — the aluminum locks had a matte finish and the steel locks had a shiny finish. 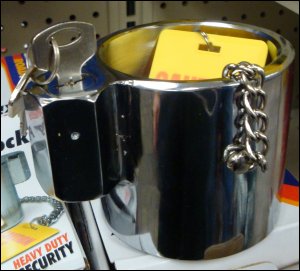 This photo shows the key inserted into the lock on a king pin lock. Notice that there are two keys there. 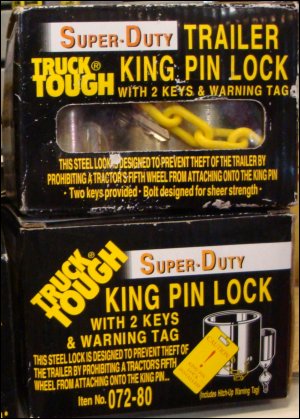 We found one other brand of lock, both versions of which are shown here.

In this case, the steel version is described as “Super-Duty.”

We note that steel versions of both brands of locks are generally more expensive than the cast aluminum versions.

The wording on the box shown says, “This steel lock is designed to prevent theft of the trailer by prohibiting a tractor’s fifth wheel from attaching onto the king pin.” 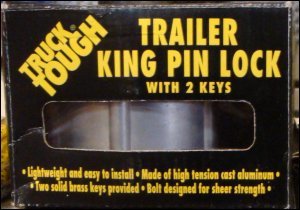 Even though this lock does not say “Super-Duty”, it still reads “Truck-Tough”.

Years ago when we teamed, we used one of these devices.

We don’t recall which brand we bought, although we recall that it was the steel version. 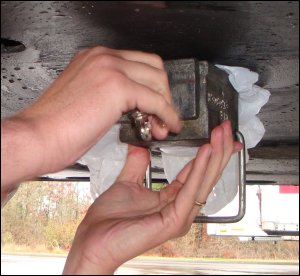 At the time, we did not think of using a plastic bag to prevent the lock’s contact with the platform grease on and above the pin.

We stored the lock in a plastic index card file box in order to keep it from getting grease on anything else in the truck’s side box.

Eventually, it became impossible to handle the device without getting grease on our gloves or our hands.

Perhaps using some Goop would have helped.

It was a moot point when Mike went to work for Schneider National because he was required (at his own expense) to buy a sturdier king pin lock called “The Enforcer.”

If it looks larger, thicker and more intimidating than the others, that’s because it is.

We have never seen The Enforcer for sale at a truck stop.

Besides the size of the lock, another major difference between the smaller units and The Enforcer is the shape of the locks and keys.

The curved lock and key make picking it very difficult.

The lock shown here has been installed on a trailer without a plastic bag between it and the pin. 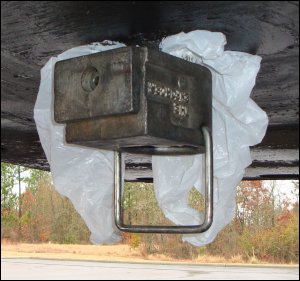 The lock shown here was what Mike put on his trailer, with a bag between it and the pin.

We also note that these locks were put on 180 degrees upside down from each other.

You can from the handle and the locking mechanism positions. 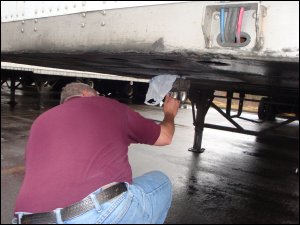 In this photo, Mike is giving a “security tug” on The Enforcer under his trailer, to make sure that it is on firmly and won’t come loose.

We strongly recommend the use of a good quality and sturdy king pink lock as a means of deterring or thwarting trailer theft.

Money saving tip: When Mike bought The Enforcer years ago, he paid $50 for it out of pocket.

That’s a lot to pay for a lock.

However, that’s a whole lot cheaper than a stolen trailer, stolen freight, the loss of a job, and the possibility of never being hired by another trucking company.

Think about it: If you dropped your trailer in an unsecured location and did nothing to keep it from being stolen — and it was stolen — more than likely, your company has grounds to terminate you.

In order to deter theft, one has to anticipate what a thief would do.

A thief wants something to steal quickly and easily.

It takes only about 30 seconds for a 2-person team to swipe an unsecured trailer.

Don’t allow yourself to be thoroughly embarrassed and put to shame by having to call your company to admit that your trailer and whatever load was on board has been stolen.

Installing a king pin lock takes only seconds, but the lock and time you invest to install it are worth much more in terms of peace of mind.

Return from King Pin Lock Use and Installation to Prevent Trailer Theft to our Tools and Equipment page or our Truck Drivers Money Saving Tips home page.

On Fault, Personal Responsibility and Blame Among Truckers

Sitemap for Trucks and Commercial Motor Vehicles, for Truckers