Does the position of the landing gear crank handle on your dropped semi trailer matter? 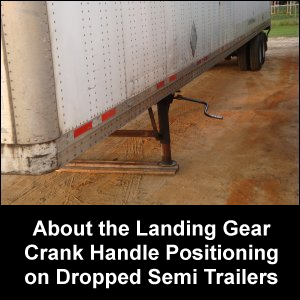 We contend that it does, for at least two reasons:

The photo shown is of a dropped semi trailer with its handle sticking out.

When Mike saw this on the trailer next to his, he did the driver a favor by placing it properly on the hook.

Mike knew that the next driver to back next to this trailer might not be so concerned.

If a driver backs a trailer into a spot close to another with its landing gear crank handle in the ready-to-crank position, the back of the backing trailer could conceivably snap the handle right off.

Or it could conceivably bend the assembly.

The images show where impending contact is about to be made.

Obviously, the trailer will need to be repaired if the handle is snapped off or badly bent.

There’s a common sense principle about not putting a stumbling block before the blind.

Yes, professional drivers should be watching where they are walking between trailers.

But if it is dark outside, a driver may not be counting on having to watch out for the crank handle sticking straight out from the side of the trailer parked next to his or her rig.

Imagine the pain of walking into it, even at a moderate pace.

Depending on the person’s height and the position of the handle, it could hit him or her in the stomach, groin or thigh, potentially causing a significant amount of pain.

Be neighborly and practice kindness and courtesy by putting the handle back in its place.

Some drivers think that by just leaving the handle hanging freely but not on the hook, they’ve done their duty.

However, if a driver has dropped a trailer in a dock on which works a particularly vigorous forklift operator, theoretically, the bouncing of the trailer could cause the crank handle to swing such that it gets stuck under the bottom of the trailer.

It could take a significant amount of time and strength to dislodge it.

Besides being snapped off, a crank handle that gets backed into can be bent or the assembly so damaged that the landing gear has to be repaired.

If bent into an unusable state, but the assembly is still good, the driver may be faced with having to draw up the mechanism another way.

Have you ever tried to crank up 40000 pounds with a screwdriver?

In these two examples, please notice that at a distance, it may not be apparent that the handles are incorrectly positioned. However, look at the close-ups. 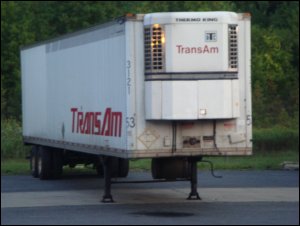 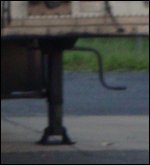 This refrigerated van was dropped at a receiver’s location, parked by itself.

These are two trailers dropped side by side at a receiver.

Notice that the trailer on the left has its handle sticking out, directly toward the other trailer. 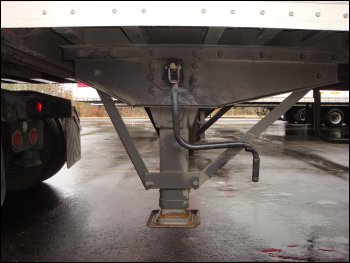 Although this semi trailer is connected to a tractor, this is the correct position of the landing gear crank handle behind a fixed hook. 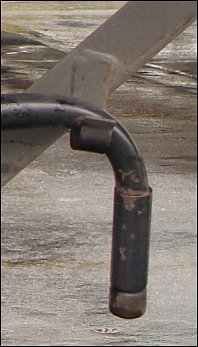 This is a close-up view of the trailer’s crank handle from above, tucked into place behind a fixed hook. 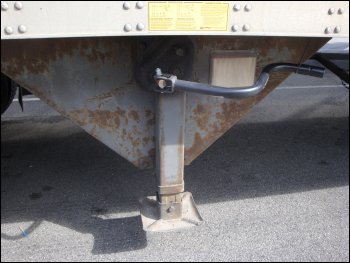 Although this semi trailer is connected to a tractor, this is the correct position of the landing gear crank handle behind a movable hook. 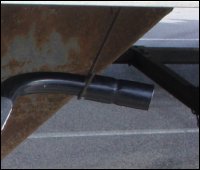 This is a close-up view of the trailer’s crank handle from above, tucked into place behind a movable hook.

Money saving tip: Is there more to putting the landing gear crank handle back in place after dropping a trailer than you thought?

The way you leave it can end up costing you a lot of money and possibly some time.

It could also do damage to a fellow driver.

Do yourself (and others) a money saving favor by being diligent to replace the handle behind the hook every time.

Save yourself the unneeded expense of repairs and personal injury.

How a Truck Cam, Smart Cam or Dash Cam Can Save Truckers Money