It died. Or at least it seemed to. But some later inverter troubleshooting proved it wasn’t the fault of the machine at all. 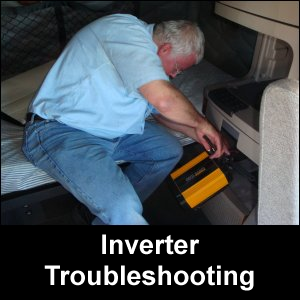 Like many professional truck drivers, we came to depend on our DC-to-AC inverter to power everything from cell phones to cooking appliances in our trucks.

Some drivers might depend on theirs to power CPAP machines, laptop computers, fans, and other non-12-volt appliances.

We used ours mostly to save money through cooking our own food.

We were looking forward to having macaroni and cheese for dinner.

Just as we had done many times before, we set up our hot pot to boil the pasta.

Less than two minutes into the heating process, our inverter put out a little sound (a beep?) and quit.

We opened up the cabinet in the truck where the inverter was housed, thinking that all we needed to do was turn it back on.

It was dark outside, so any attempt on Mike’s part to go out to the battery area under the catwalk behind the truck’s cab to do inverter troubleshooting would have been futile.

He needed light to see what was going on under there.

Well, so much for homemade mac and cheese!

Previous Trouble with an Inverter

We had had trouble with an inverter before, but figured that one was our fault.

Something got a little too close to the connection between the inverter and the cable (which connects to the battery).

The best we can determine, that situation led to the inverter shorting out. 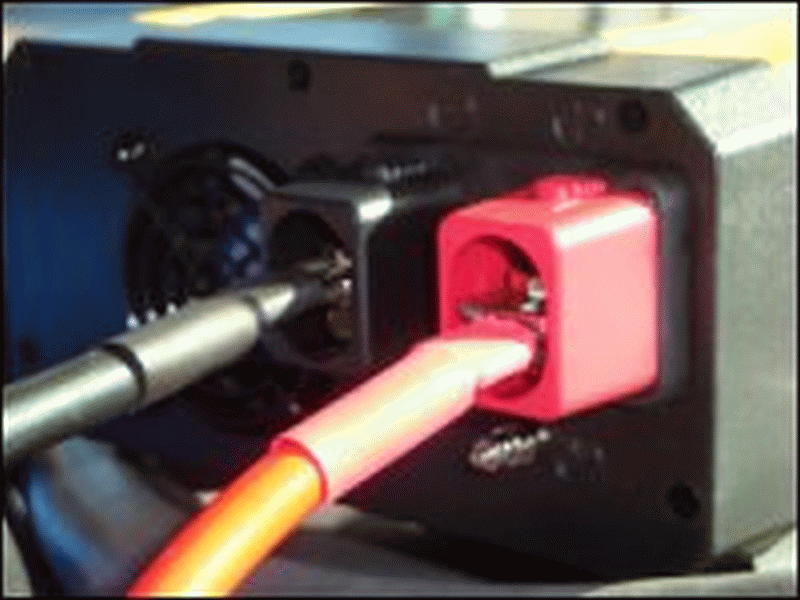 But this time, there was no way that something could get to either connection because each one had a plastic sheath around it to protect it.

The photo here shows the plastic sheath around the connection, making it impossible for something to touch where the cable connected to the inverter.

So, we figured that the inverter had just died and we were going to need to buy a new one.

Furthermore, we were going to have to go to the fuss and bother of sending the old one back to the manufacturer because we were already past the 30-day return period for the truck stop where we’d bought it.

The next day, after having purchased yet another inverter (a 1500 watt Power Drive unit), Mike worked to install it.

After making all of the required connections, though, the inverter would not work!

What in the world was going on?

Could the power inverter installation kit — the cables that connect the inverter to the batteries — have died?

We decided that before we bought another set, we would check one more thing by way of inverter troubleshooting…

That One More Thing

Not too many weeks before, one of the mechanics in the shop at one of Mike’s company’s terminals had installed a fuse between the red cable connecting to the inverter to the batteries.

This illustration shows the inverter connections with cables to the battery or series of batteries.

Vicki asked Mike some questions about how the connections worked.

She suggested bypassing the fuse to see what would happen.

Lo and behold, bypassing the fuse allowed the new inverter to work!

Hurray! We had power again!

It was the fuse that had burned out!

As Mike commented to a fellow truck driver, “Check the little things first.”

That’s the inverter troubleshooting that we will do the next time something like this happens (which hopefully never will).

Now, did we ever check the inverter that we thought had died.

Perhaps it is simplistic to say that after we learned that the fuse had blown, we assume that the inverter we replaced is still good.

Did we take the newest inverter back for a refund?

We just put the one we thought had died into one of our self storage units as a spare.

The fuse that had been installed was supposed to protect our inverter (and possibly the truck’s batteries).

At the time that all of this happened, we planned that the next time we got back through Mike’s company’s terminal again, we’d probably pick up another fuse and install it.

In the meantime, our newest inverter worked just fine being connected directly to the batteries.

Money saving tip: Before you go out and buy a new inverter to replace an old one, perform some inverter troubleshooting first.

If you have a fuse installed, check to see if bypassing it (connecting your inverter directly to the battery or series of batteries) allows your inverter to work.

Just because this situation turned out for us this way does not mean that it will in your situation.

You could have a dead battery.

Mike says that you can try moving the cable to another positive post (the red one) on a different battery.

You should see sparks coming off a working battery post.

He always uses insulated work tools so that any electrical connectivity is not carried from the batteries to his body.

Always make sure that you follow the manufacturer’s instructions and your company’s procedures for installing an inverter and doing troubleshooting.

Return from Inverter Troubleshooting: Diagnosing and Fixing Problems to our Tricks of the Trade page or our Truck Drivers Money Saving Tips home page.

Money Down the Drain During CVSA Brake Inspection