On the subject of GPS for truckers, if a trucker has a truck-specific GPS that guides him/her onto a restricted route or into a low clearance — thus causing a truck accident — should the manufacturer of the GPS unit face some of the liability or penalty? 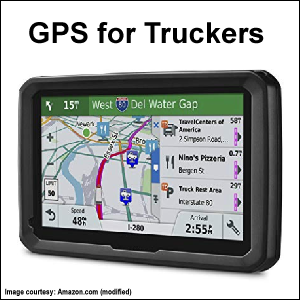 Disclaimer: We have never had a GPS unit in any of the trucks we have driven. Mike has GPS capability on his Smartphone. The need to route around low clearances in connection with a local truck driving job is extremely small.

We are concerned that many truckers are having truck accidents because they’re relying on technology that is supposed to be dependable, but which evidently is not.

These accidents are not only costly in both time and money, but they could cost a trucker his or her job or career.

Although we haven’t heard of it happening, we envision the day will come when truckers will personally be held responsible to pay for repairs as a result of faulty GPS routing. (How much does that cost, we wonder?)

On August 22, 2012, Vicki wrote to the author of the article entitled “Trucker: Navigation System Put Him on Crash Course with Port Chester Bridge”(1) and stated that she would appreciate knowing:

1. What make and model of GPS unit was the trucker using?

2. Was the GPS unit/program intended for use with commercial motor vehicles?

Vicki,
Unfortunately, that information was not available from the police. They were more interested in why the truck driver didn’t read all the signs that are posted on the roads leading to the bridge …. and the sign on the bridge itself.
Regards,
Bill

If you read the article, you will find that:

The accompanying photograph shows that there was obviously damage done to his rig.

Accidents Blamed on GPS for Truckers

Global positioning systems now frequently guide truck drivers onto the parkways, where they collide with overpasses as low as six feet, 11 inches high, according to U.S. Senator Charles Schumer of New York, who is calling for new regulations to prevent the accidents.

Schumer said trucks have crashed into overpasses in New York state more than 200 times each year since 2005. GPS devices contributed to 80 % of those accidents because they do not distinguish between cars and trucks and do not keep truck drivers off roads where tall vehicles are prohibited, he said.

GPS for Truckers “Responsible” for Other Damage?

Bridge strikes are not the only truck accidents blamed on faulty GPS routing.

We read a September 24, 2012, article in which a trucker damaged a weight-restricted bridge and “took out a huge section of guardrail” on a restricted road supposedly because his global positioning system directed him there.(2)

According to the article, police said that “the area is well posted with signs warning truck drivers to take another route.”

Why Are Trucker GPS Units Doing This?

When it comes to GPS for truckers, one would think that the GPS manufacturers would have all of the kinks worked out by now, that they would know where all of the restricted routes and low clearance bridges are and incorporate that information into the GPS routing.

After all, doesn’t a truckers atlas list all of the low clearances and restricted routes in the front of the book?

Where the Blame Definitely Falls on Truckers

Obviously, if a professional truck driver is not using a “trucker GPS” unit — that is, one specifically designed for drivers of commercial motor vehicles — all of the liability for any low clearance accident falls squarely on his or her shoulders.

The unit that was obtained should have been one designated as GPS for truckers.

Is There a Gray Area? 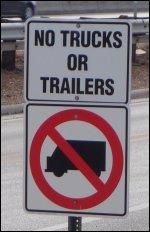 But what if the trucker had the kind of unit designated for large trucks and the GPS routing was wrong?

Yes, we know that truckers should be watching for and heeding “No Trucks” signs and “Low Clearance” warnings.

But is there at all a gray area regarding GPS for truckers here?

What do you think?

Since this page was written, Vicki issued a reward to the first trucker who can document this, on our CMV GPS Low Clearance Report Form; Low Clearance Awareness Day page.)

Money saving tip: To avoid a low clearance accident, always consult the information in the front of your commercial motor vehicles road atlas (aka truckers atlas) along your proposed route.

If any part of your proposed route forbids commercial vehicles, find a route that isn’t restricted.

If there is a low clearance along your proposed route, find a route without any.

Some carriers have directions to shippers and receivers in their computer systems which they make available upon request through the same systems by which dispatches are sent. Request those, write them down and follow them to the letter.

If the carrier does not have directions, call the shipper or receiver to get exact directions to their location.

Return from On GPS for Truckers: When GPS Routing Leads to Truck Accidents to our Truck Operations page or our Truck Drivers Money Saving Tips home page.

How a Truck Cam, Smart Cam or Dash Cam Can Save Truckers Money

Out of Service Truck: Trucker Stages a Showdown