As we describe on our packing list page,we had a portable toilet in our 18-wheeler from the very first load we ever took as professional truck drivers. 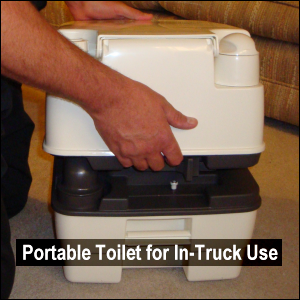 The type we bought in the early 1990s was a Thetford Porta Potti® 135, similar to the one shown here.

We considered this item to be even more important than having a bathroom at home because it served not only as a toilet, but also as a collection point for all waste water from

The Thetford Brand of Portable Toilets

Although there are different brands and designs for portable toilets, the only experience we have had as commercial truck drivers is with the Thetford brand.

Thetford sells a number of different size portable toilets, all of which have two basic parts which we call

Attached to the top of the water reservoir tank is a seat and lid.

There is also a bellows that upon being hand-depressed, pumps water from the upper tank into the bowl to “flush” waste toward the lower tank.

A handle on the front of the waste holding tank slides to either open or close the “door” through which the waste and flush water flows.

When pushed in, the door to the waste holding tank is closed.

Assembling and disassembling the Porta Potti® is very easy.

The two tanks fit together and a slide mechanism locks them together. (In newer models, the lock may be automatic.)

To dump the contents of the waste holding tank:

You may wish to start flushing the receiving commode just before dumping your portable toilet so that the waste is removed quickly.

When the waste is evacuated properly, your hands never touch it. (You can’t say that about putting waste in a plastic bag or bottle.)

In general we have observed that, as Thetford’s model numbers go up, the larger the tank and the greater the number of accessories.

We upgraded from the 135 model to the 155 model because of the increased capacity of the waste holding tank (which means fewer trips to dump the waste).

As we recall, there may also have been a problem with the bellows leaking water.

We have never once had a problem with a leaking waste holding tank.

The Prohibition Against Portable Toilets In-Truck

Mike has about 16 years of professional driving experience.

In all those years, the only time when he did not have a portable toilet in his truck was the 13-month stretch during which he drove for Schneider, a trucking company which forbade all such devices from their trucks.

Supposedly, the company’s leadership was afraid that they would leak and damage their trucks.

Whether this was just a suspicion or they had had a problem with a leaking mobile commode, we do not know.

We feel strongly that if they were to investigate, they would find that the Thetford brand is advertised as “sanitary, odorless, and leak proof.”(1)

Cleaning the Porta Potti® is probably easier than cleaning your home’s commode.

When we were based out of a residence, Mike would scrub our portable toilet with dishwashing liquid and a rag under running water outside, and let it air dry before putting it back in his truck.

Toward the end of his time driving regionally, he regularly cleaned the portable toilet, but still rinsed it under running water. 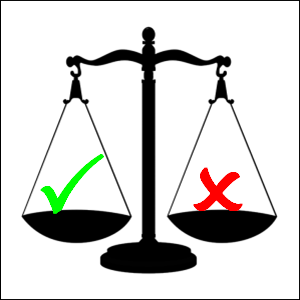 The great advantage of having a portable toilet in your truck is that you no longer have to depend on the availability or cleanliness of restrooms on the road.

You don’t have to wait for the shipper or consignee to open up to use their facilities.

As for restrooms in some rest areas on the road, some are not cleaned as often as they should be.

You don’t know who last sat on that public toilet or what he or she left behind for the next sitter to pick up!

In some cases, rest area restrooms are not open to the public 24 hours every day.

Any time you’re parked and there is room in the waste holding tank, you can use your portable toilet.

This convenience has come in very handy over the years.

Vicki recalls a time years ago when she was driving east across Nebraska late at night.

She had eaten something for dinner that didn’t agree with her and it roared through her like a freight train.

With no rest area anywhere nearby, all she had to do was

She didn’t even wake Mike, who was sound asleep.

Other Places to Use

The unit is designed to hold water in the top reservoir and waste in the holding tank. Both of these can be heavy, individually or combined. Do not strain your back attempting to carry it.

We strongly recommend the Thetford Porta Potti® portable toilet for use in an 18-wheel commercial motor vehicle.

And, of course, we recommend that users clean their hands after using any toilet.

This is a larger version of the Thetford Porta Potti from Amazon.com, with which we have an affiliate relationship.

Update: We wrote about 10 reasons why you should consider having one in your truck.

Money saving tip: We’ll share a few money-saving tips with you on this page: