One of our favorite warm desserts is Peach Crisp. 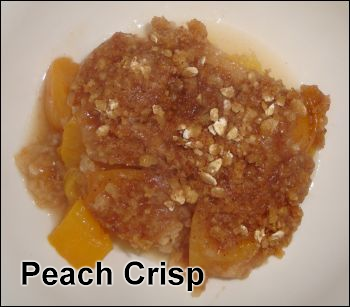 There are many recipes online.

We have chosen to adapt one that was designed for using fresh peaches or apples by substituting canned and drained peaches.

Cut in margarine. Mixture will be crumbly.

Note: We reduced the amount of butter or margarine from when we originally published this page.

Side Note on Buying Peaches

In our home state of South Carolina, there are many farms growing peaches in and around Edgefield County. For years before we became homeless, Vicki would make her annual trek to a specific peach packing shed in order to buy the Freestone variety of peaches. (This variety, as its name implies, does not require consumers to fight with getting the pit out of the middle of the fruit, which is a great advantage when eating or processing.)

Although we greatly enjoy eating good-tasting peaches raw, their lifespan in that state is limited. We have tried freezing peaches and for some reason they just don’t have the same texture after having been frozen. Of course, the process of canning peaches renders the texture different from their raw state, too. However, canned peaches can be stored at room temperature whereas frozen peaches must remain either frozen, refrigerated or eaten.

Vicki has never worried about removing the skins before canning peaches. If you look at the pictures below, you will see on the surface of some chunks of fruit that the skins are still in place.

We have determined that canned peaches are best eaten within a year of canning. After the one year point, for reasons we have not yet been able to determine, they seem a bit mushier. So, we aim to eat peaches in a timely manner.

As you may know, commercially canned peaches are packed in syrup, usually a heavy syrup. Vicki packs hers in a very light syrup (the least amount of sugar to water). After all, she wants to taste the peaches, not the syrup. 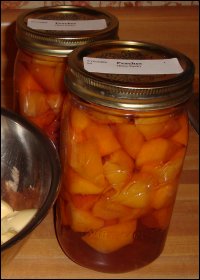 Pictured are two quarts of home canned peaches, which serve as the basis of our peach crisp.

The extra light syrup will be drained off.

(Note to home support teams: the peach-flavored syrup can be thickened for pancake syrup or used to flavor teas.) 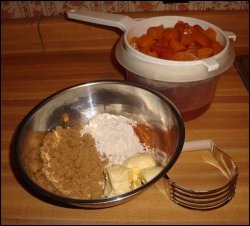 While the peaches are being drained through a colander, Vicki assembled the dry ingredients and margarine in a large bowl. 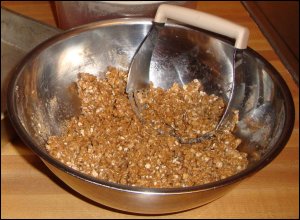 Although she has used a fork to mix the ingredients in the past, she has found it easier to use a pastry cutter or blender.

Because of the margarine, the mixture will be a bit on the greasy side. 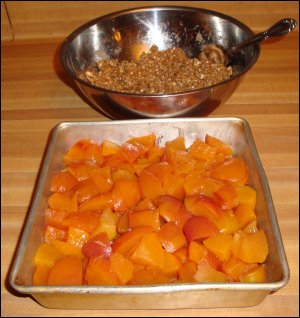 The drained peaches were placed in a 9″x9″ baking pan. 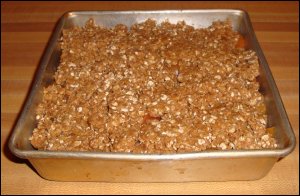 The oat mixture was spread on top and the dish was baked.

Modification for Preparing Peach Crisp in a Truck

So, Vicki went digging around to see if she could find a crock pot version of peach crisp that uses Bisquick and omits the margarine.

But that didn’t stop her from experimenting…

Below, you will see our first experiment of preparing peach crisp in a crock pot with Bisquick, using only one drained quart jar’s worth of peaches.

Place the drained canned peaches in the bottom of the crock.

Mix all dry ingredients together and spread evenly over the fruit.

Turn the crock pot on the temperature setting of your choice depending on how fast you want it to cook, at least 2 hours. 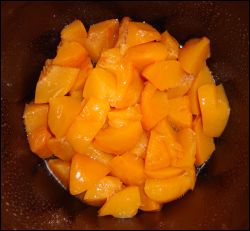 Vicki placed the drained peaches in the bottom of a crock pot that had first been sprayed with non-stick spray. 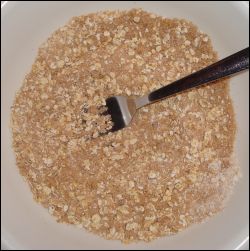 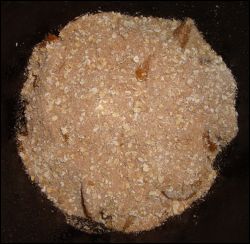 The oat mixture was sprinkled over the peaches. It still looks dry. 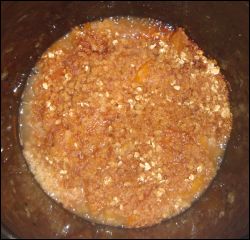 The dish was cooked on “high” for 2 hours. The photo at left shows the dish at the end of its cooking cycle.

Here is a close-up of the top edge of the peach crisp in the crock pot. You can see the bubbles from where the dish had been boiling. 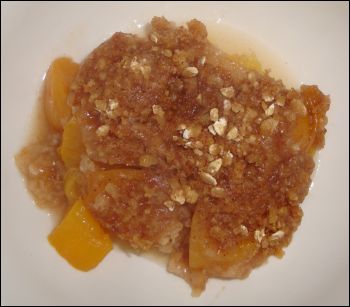 Here is a portion of peach crisp served from a crock pot using Bisquick instead of flour and no butter.

The oat mixture was definitely no longer dry and could not really be described as “crisp.”

Butter or margarine might have added a bit of flavor — and perhaps even some crispiness in the crock pot — but it sure would have added fat and calories.

Not only that but since the resulting dessert is so wet, we speculate that the added margarine would have made it greasy.

Here’s a nutritional evaluation of the two versions:

This is the equipment we used for making the crock pot version of Peach Crisp using canned peaches in a truck:

Please note that we have never fixed Peach Crisp using raw peaches in a crock pot.

We would be interested in knowing how our adapted crock pot recipe works using the raw fruit.

Money saving tip: Depending on the cost of the canned peaches, this can be a low-cost dessert.

Since we used home canned peaches, this dessert cost us very little to make.

To reduce calories, drain off as much of the syrup as possible.

If available, look for peaches packed in very light syrup (the least amount of sugar).

To reduce calories even more, reduce or omit the butter or margarine.

Using a spread that is touted to be “heart healthy” might be an alternative to butter or margarine.

Some folks like to “double” the topping on their peach crisp.

Bear in mind the extra calories and fat when doing this.

When using a crock pot to fix this dish, there may be a little bit of sticking during the cooking cycle.

After you have removed the food from the crock, simply soak the crock with soap and water for easier cleaning.

We have found that it is best to eat canned peaches within one year of canning.

After that, the texture starts to decline.

Return from Peach Crisp: a Wonderful Warm Dessert You Can Make in Your Truck to our Food and Recipes page or our Truck Drivers Money Saving Tips home page.

Making a Grilled Cheese Sandwich in Your Tractor Trailer

Save Yourself Some Grief

Using Grills to Cook Food in Your 18-Wheel Tractor Trailer

The Travel Packing List of One Money-Saving Pro OTR Trucker