We have posted numerous snippets on our blog about the Texas speed limit increase to 85 miles per hour on the 41-mile stretch of Highway 130, including links to these articles:

We also had this exchange with @XRSCorp on Twitter:

What Are The Costs Involved?

When it comes to truck operations, there are direct and indirect costs to consider.

Regarding the Texas speed limit increase on Highway 130, drivers need to be concerned not just about the direct cost of the toll but also the indirect cost of an increased potential for accidents.

We’re not sure how old the statistics are, but USA Today has an infographic that says

“Speeding is a factor in 30% of all fatal crashes, killing an average of 1,000 Americans every month.”

Also, we’re not sure what definition they’re using for speeding.

Is it merely going faster than the posted speed limit or going too fast for conditions?

The National Safety Council seems to equate “speed” with “speeding.”

They say, “Speed is involved in about one out of three fatal crashes, according to NHTSA. It is the third leading contributing factor to traffic crashes.”

Bear in mind that these statistics match speed with “fatal” crashes, not just any crash.

Many a wreck has damaged vehicles and injured people without being fatal. 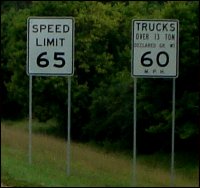 Most truck drivers are familiar with split speed limits as being lower than their maximum allowable truck speed, like that shown in the photo here.

However, in the case of this Texas speed limit increase, it will be to a speed higher than many trucks are capable of going.

Although owner-operators who have no governors on their trucks will easily be able to go 85 mph — to keep up with traffic going that fast on the stretch of road with the Texas speed limit increase — many company trucks are governed at 63 mph to 65 mph.

A December 20, 2010 article in Land Line Magazine entitled “Ohio Turnpike raises speed limit to 70 mph for all vehicles” stated this:(2)

… Speed limits have a long and detailed history in Ohio. Prior to 2004 on the Turnpike and prior to July 2009 on state routes and freeways, speed limits were split at 55 mph for trucks and 65 mph for cars.

Since the changes, the accident rate involving commercial vehicles has dropped 6.4 percent according to a commissioners’ report.

OOIDA supports uniform speed limits and fights against split speed proposals. Ohio and Illinois are two notable examples of where OOIDA members and leadership made a difference in getting split speeds overturned. …

The Kens5.com article linked above quoted a trucker who said that his truck’s maximum speed is 68 miles per hour and “Next to a car traveling 85 mph, … it’s an accident waiting to happen.””

… Speed limits and time savings are only part of the equation truckers use to determine whether to use a toll road. Another important threshold is price. …

The natural question is: will the savings in time outweigh the cost of the toll?

The Kens5.com article linked above quoted another trucker who said “the amount of time he would save from taking Texas 130 would be offset by the toll fees and extra fuel he would burn by driving faster.”

What Does the Texas Speed Limit Increase Cost in Toll Money?

On the TexasTollways.com website, one can calculate the cost of one’s tolls in the Austin area depending on the distance traveled and what kind of vehicle is driven.

Vicki clicked on the links in the map for her starting and ending points at the respective ends of the toll road on Highway 130. 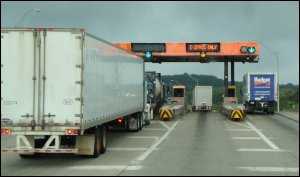 The faster route is not always the best bargain, especially if it has a toll attached to it.

When tolls are more than people can handle, they find other cheaper routes.

When they do this, there is less traffic on the toll roads than is expected.

When Mike drove for one regional trucking company and had to travel in the northeastern USA through the New Jersey area, he had the opportunity to take the New Jersey Turnpike (a toll road).

However, his trucking company instructed him to take I-295 (a non-toll road) until he “had” to get on the toll road.

CBS New York reported in January 2012 that, “A 50 percent toll increase in New Jersey has drivers looking for a cheaper route.”

We are reminded of a toll road in our home state of South Carolina.

I-185 is dubbed the “Southern Connector” around Greenville.

According to Wikipedia, “By 2007, the Connector 2000 Association was having financial difficulties because ridership on the toll road was not meeting original estimates.”

Will the tolling of the 41-mile stretch of Highway 130 with the Texas speed limit increase prove to be a winner or loser?

Only time will tell.

Money saving tip: To determine if it is worth it to take any toll road, calculate the amount of time that you would be saving by taking it based on your truck’s maximum speed versus the factors of the outlay in cash (in both toll and fuel) and potential for getting involved in an accident.

This especially applies to the stretch of road with a Texas speed limit increased to 85 mph.

What good will it do to save a few extra minutes if you’re involved in an accident (which will cost you both time and money and possibly much more)?

A Proposition Between Drivers and Trucking Companies on APUs