Should professional truck drivers engage in texting from their commercial motor vehicles? 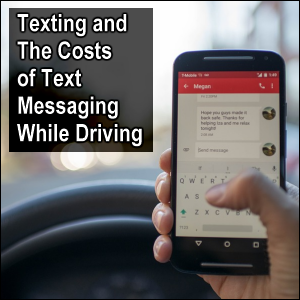 Are there costs involved?

Please note that an important update has been added to this article since it was written.

This broad subject of sending and/or receiving text messages deserves to be broken down into at least these three categories:

To us, there is also the distinction between “talking” and “texting.”

The former may be done hands-free; the latter requires at least one hand and usually both.

Operating a Cell Phone in a Truck 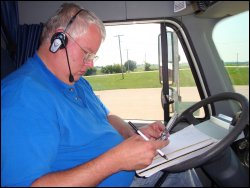 In this photo, professional truck driver Mike Simons is using both hands to operate his cell phone even though he has his VXi BlueParrott B250XT+ 95% Noise Cancelling Headset

in place. (This link is from Amazon.com, with which we have an affiliate relationship.) 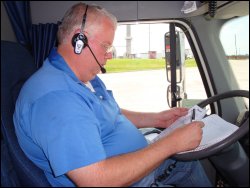 In this photo, he is using his headset alone to talk “hands-free” with someone in his company about a load.

In both photos, Mike is operating his communication equipment while being parked.

Why Are People So Concerned About Texting?

Because it is dangerous!

You may or may not be aware of these statistics.

According to the New York Times article entitled “Texting to Death”:

Studies suggest that drivers who send or receive a text message tend to take their eyes off the road for about five seconds, enough time for a vehicle going at highway speed to travel more than 100 yards. The Virginia Tech Transportation Institute found that truckers sending text messages are 23 times more likely to cause a crash or near-crash than a nontexting trucker.

When a driver concentrates on the task of driving, he or she is more aware of

He or she is also better able to compensate for

What Kinds of Devices Are Used for Texting?

We are not aware of all of the devices upon which a text message may be sent.

However, we know that many drivers (professionals and non-professionals) use hand-held electronics for communication purposes.

Some commercial motor vehicles are equipped with satellite communication systems (such as QualComm).

When we teamed for Swift and U.S. Xpress, we had the capability of sending messages to our fleet managers via QualComm mobile communications terminal (MCT) while the truck was in motion, but that was only to be used by the team member not driving at the time.

Perhaps a team driver who drives for a company that uses QualComm would care to contact us to let us know whether or not this situation has changed. 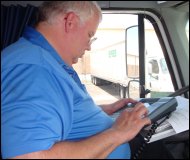 Mike reports that when he drove for Epes Transport the first time and with Schneider, he had the ability to read messages on MCT while he was driving.

However, Epes cracked down on that.

In the last truck that Mike drove for Epes, it was impossible to use the QualComm unit while the vehicle is in motion.

In the Cascadia issued to him in 2010, there was a feature that allowed Mike to listen to messages sent by Qualcomm. 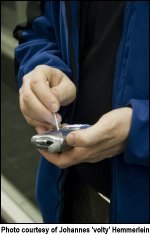 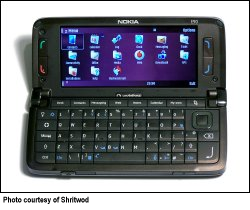 Obviously, devices like the ones shown here are meant to be used with two hands.

Why Are Bans On Being Passed In State After State?

One’s hands can’t be both on the electronic device and the steering wheel at the same time.

Likewise, one eyes can’t watch the device and the road at the same time.

We know of no “self-policing” effort within the transportation industry regarding this behavior.

It seems that some professional drivers are willing to voluntarily forgo sending electronic messages while driving out of concern for others on the road with them, but others are not.

That is most likely why states have started banning this practice, out of concern for the general public.

Still, if this were a big problem, you would think that the statistics would back up the claim.

Which States Have Texting Bans In Place?

In 2009, the Governors Highway Safety Association endorsed a “Texting While Driving Ban for All Drivers.”(1)

They also have a state-by-state list of “distracted driving laws“, which includes

While you may wish to review the list from time to time to make sure you are in compliance, it is much safer to just not engage in this activity while driving at all.

A similar listing is on the website of the Insurance Institute for Highway Safety, Highway Loss Data Institute: Cellphone laws.

Furthermore, it appears that the federal government has jumped in the fray on this issue.

An article in eTrucker entitled “DOT to ban texting by truckers, limit phone use” stated(2):

Truck and interstate bus drivers would be prohibited from using text messaging while driving under a rulemaking planned by the U.S. Department of Transportation. In addition, DOT plans to place restrictions on the use of cell phones while driving.

Other Kinds of Distracted Driving 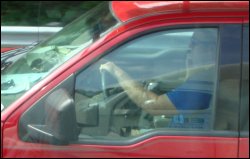 While it may sound noble for the federal government to want to reduce fatalities and crashes caused by “distracted driving,” it must also be remembered that many people become distracted by many other things while they are driving.

Shown here is a driver of a four-wheeled vehicle on a cell phone.

Besides talking on cell phones, we are aware that people engage in the following while driving: 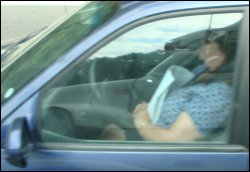 Shown here is the driver of four-wheeled vehicle with paperwork close to her body, as if ready to read while driving.

What Crackdown Is Next?

OOIDA’s Position On This

We have read that OOIDA (Owner Operator Independent Drivers Association) backs the text ban and wants the federal government to educate motorists how to drive around big rigs.(3)

We agree with their right to back the ban but feel that it is not the federal government’s place to educate motorists how to drive.

(After all, where is that in the Constitution?)

However, since OOIDA has identified this need, we think it would be marvelous for them to undertake this education project themselves.

This could result in a great deal of positive public relations not only for them but also for the trucking industry at large.

While we have personally seen numerous professional drivers using hand-held phones while driving, we have never observed one sending text messages while driving.

However, we know of at least one truck driver, a 25-year-old tow truck driver who was talking and texting on two cell phones when he crashed into a car and swimming pool. (Source.) (Photo link.) 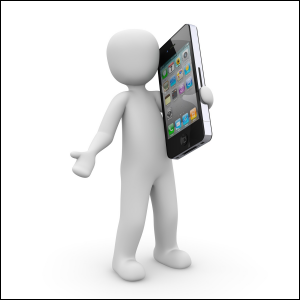 We are sure that some trucking companies have policies against electronic device use while driving.

If your company doesn’t have such a policy, we most certainly urge you to:

There are far too many risks involved.

While it may not seem apparent, there are obvious potential money-saving benefits to not sending electronic messages while driving.

We also address cell phone use while driving.

According to the article, “LaHood said drivers of commercial vehicles caught texting could be fined up to $2,750.”

A January 24, 2012, article stated that professional truck drivers are being singled out for using hand-held phones while driving. Michael Hayes of the Arizona Trucking Association said that “80 percent of collisions involving a semi-truck are caused by passenger vehicles.”(4)

Money saving tip: The potential harm and costs that can come from distracted driving leading to an accident includes but is not limited to:

Is it worth it to engage in this activity while driving when any or all of these things can happen?

If you would like to text in other places, your starting texting cost will depend on:

Make sure that to get the best deal, you shop around regularly. Compare features of various plans.

If you text a lot, consider getting an “unlimited” plan. That way, you won’t be charged per item (however your wireless service provider counts that).

Return from Texting Truckers: The Costs of Text Messaging from a Truck to our Telecommunications and Telephone Services page or our Truck Drivers Money Saving Tips home page.