One of our favorite dishes is tuna noodle casserole. 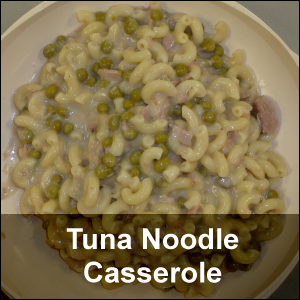 To us, it is flavorful and filling; but even more important, it includes grains, seafood and vegetables.

Mike likes to top his with cheese for a slightly different taste as well as to incorporate a dairy component to his meal. 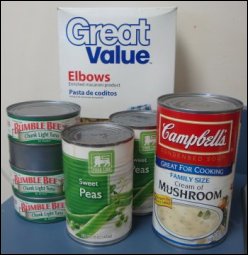 Logistics When Preparing This Meal 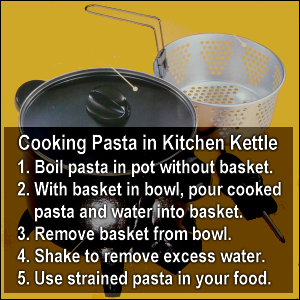 We used our hot pot to boil the pasta (without using the fryer/steamer basket inside the pot).

When the macaroni was cooked al dente, Vicki put the fryer/steamer basket down into a large bowl.

She poured the cooked macaroni and water into the basket, letting the water fill up through and around the pasta.

Vicki discovered some time back that if she lets cooked pasta sit in boiling hot water for about 3 minutes past the stage where it is “cooked,” it swells a little larger without becoming too squishy.

The 3-minute lag time was sufficient to do two things: 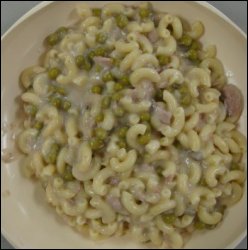 She carefully heated the soup mixture, making sure that it did not scorch on the bottom.

When the tuna/soup/pea mixture was bubbly, she took the fryer/steamer holding the macaroni in hot water out of the bowl and gave it a shake to remove excess water.

Since the fryer/steamer basket has a “hook” on the side, it was easy to hang the drained pasta over the tuna mixture while she dumped the cooking water from the bowl into the portable toilet.

She used the large bowl for mixing the cooked pasta and tuna/soup/pea mixture together.

Easy to Prepare in the Right Location

From the photo above showing the ingredients, you may have guessed that we prepared this batch of tuna noodle casserole in a location other than the truck that Mike drove for his trucking company.

We actually prepared and ate this delicious dish at one of his company’s terminals.

In the photo shown here, you can see that Mike is adding mild shredded cheddar cheese to the top of his portion of tuna noodle casserole.

In so doing, he is adding the fourth “food group” (dairy) to his meal.

The other food groups in this dish are meat, grains and vegetable.

A commercial version of this dish that Vicki tried many years ago contained celery. We do not care for this and to us, this doesn’t add any flavor.

We have found that cream of mushroom soup gives our version of tuna noodle casserole just the right base in which to make the tuna, peas and pasta meld well.

You may choose to experiment with different soups, meats and vegetables.

Please be aware that the amounts of ingredients that we have listed make a sufficiently large batch such that the two of us can make two full meals off it (four servings).

If you have a smaller appetite, it might even stretch to up to six meals or more.

Back before we chose to become homeless, Vicki prepared tuna noodle casserole and froze some smaller portions for Mike to take out on the road with him.

Leftovers can be heated in a hot pot, microwave oven or electric skillet.

For what it’s worth, Vicki asked Mike when the dish was being eaten if he could tell the difference between the previously cooked and reheated macaroni and that which was freshly cooked.

He said he could not.

If we had fixed this in the truck, we would have used an inverter and a cutting board as a cooking surface.

Add in the cost of cheese, and you might up that per serving cost to about $2.00.

Compare the cost of this dish to a similar frozen entree, a microwavable version or especially a restaurant meal.

Vicki says that she enjoys this dish so much, that she thinks she could eat it every day and not get tired of it.

Money saving tip: We have experimented with the ratio of ingredients to each other in tuna noodle casserole and found that what we’ve listed here works best.

We like using canned peas that are not designated low sodium or “no salt added” because we use the liquid in the soup mixture and it tastes better to us.

If you have a specialized diet, please adjust accordingly.

The “soupiness” of the dish will also be affected by how much of the liquid you drain off the tuna.

We add no more liquid than what comes from the canned peas.

To get as much of the liquid off the canned tuna, you may want to buy a strainer designed just for that.

To remove the drained tuna from the cans, we use a fork or small spatula.

You will see from the ingredients photo that we used store brands of pasta and canned peas, but name brands of tuna and soup.

When we were shopping for tuna, the name brand actually cost less than the store brand.

To us, there is not a significant difference in taste between name brand and store brand tunas.

However, there is a significant difference in the taste of name brand and store brand cream of mushroom soups.

Even if it costs more, we like and plan to continue to buy the Campbell’s brand.

Also, when Vicki was growing up, her mom always bought the tuna packed in oil.

When she established her own household, she experimented with tuna packed in water and found the taste superior.

This is a matter of personal preference.

There are also different shapes of pasta that can be used in this dish.

Usually, the fancier the shape, the more expensive pasta will be.

We use elbow macaroni because it is lower in cost.

To save more money, you can buy all store brand products, buy them on sale, use coupons (if applicable), or cut the amount of ingredients.

Return from Try Tuna Noodle Casserole for a Well-Balanced Meal to our Food and Recipes page or our Truck Drivers Money Saving Tips home page.

Trucker Protest: 10 Reasons Why Parking Your Truck Can Be Costly

How to Sleep Better as a Professional Truck Driver