Stove top-style cooking in your truck can be accomplished with the right hot pot. 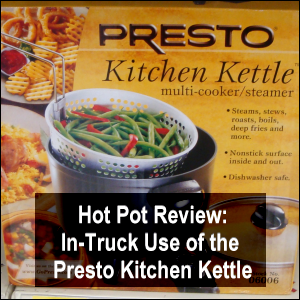 What do we recommend that you look for before plunking down your hard-earned money to buy one?

We’ve tried several hot pots over the years, including a 12-volt variation called the Pot-n-Pop.

Unfortunately, most 12 volt appliances are cheaply made but expensive to buy.

One indication of their inferior quality is the “limited 90 day warranty.”

On the other hand, professional drivers’ cooking options open up after they install a battery-connected inverter in their trucks.

Any regular 120-volt appliance can be operated, up to the maximum number of watts the inverter can provide.

Our inverter can deliver up to 1500 watts of power.

Having an inverter, we desired to be able to

all within the truck that Mike drives for his trucking company. 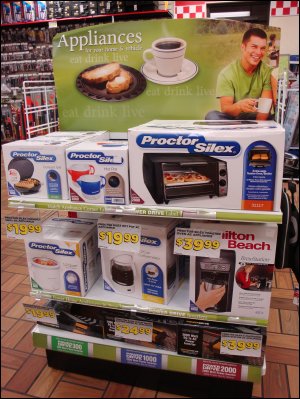 We rejoiced in 2009 when we saw a display at a truckstop that featured 120-volt appliances manufactured by a reputable company.

We seriously considered buying the hotpot from this display but kept on looking, particularly since the appliance was smaller than what we were looking for.

If you are going to be using a hot pot in your truck for cooking small portions of food or boiling water for a cup of coffee or tea, a smaller appliance might work well for you.

We also needed an appliance that had the ability to 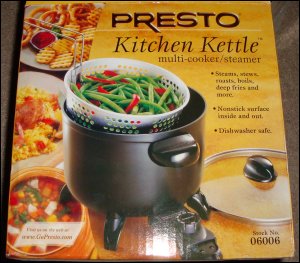 During a shopping trip on September 20, 2009, at a Wal-Mart within walking distance of a truckstop in Kentucky, we found a “hot pot” known as the Presto® Kitchen Kettle™ multi-cooker/steamer.

According to the box, the unit is able to do the following things:

The box further states that the unit is

“So versatile, you’ll use it every day! Makes soups and casseroles. Steams vegetables and rice; cooks pasta. Roasts beef, pork, and poultry.”

Among its features are:

Its specifications and indications of quality are:

Photos of the Other Hot Pot Box Sides 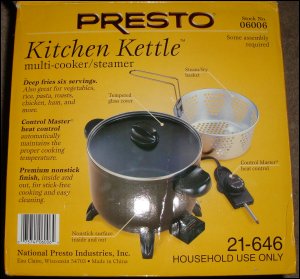 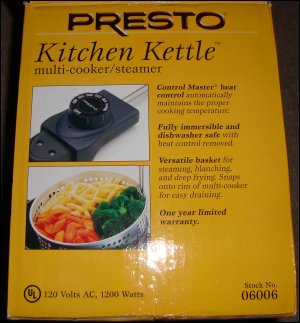 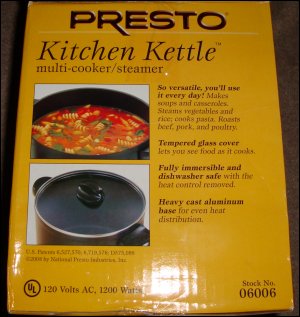 Hot Pot Features We Did Not Want

Based on our experience with the Pot-n-Pops, we knew we did not want a product that would: 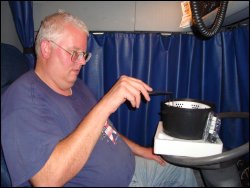 Once back in the truck, Mike was very pleased to be able to open the Presto Kitchen Kettle.

From everything we had seen on the box, this looked like the very appliance for which we had been searching. 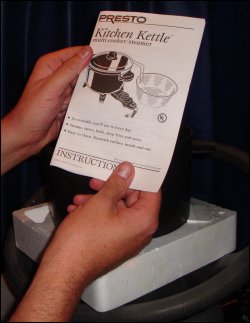 We do take issue with the description that the steam/fry basket “snaps” onto the rim of multi-cooker for easy draining.

No, actually, the holder just under the rim is designed to let the basket “rest” on the edge of the unit. It doesn’t “snap” at all. 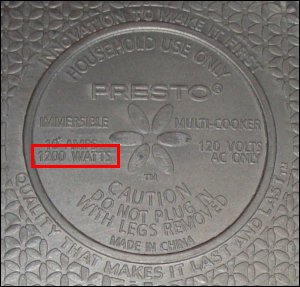 The embossed information on the bottom of the hot pot gave us further assurance that we had made a good purchase.

We knew, of course, from the description on the box that the unit required 1200 watts of power, which our inverter was more than able to handle.

The bottom of the hot pot reads, “Do not plug in with legs removed.”

The unit was boxed such that the lid’s knob was already attached, but the pot’s two knobs and four legs were unattached.

These required only a Phillips-head screwdriver to attach.

Vicki is extremely impressed with the design of the legs, which give great stability to the unit (to help keep it from tipping over).

Just outside the circle on the bottom of the hotpot were two lines meant to be read together: “Innovation to make it first; Quality that makes it last and last™” 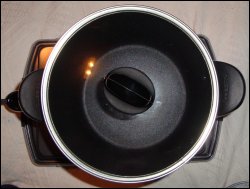 Once fully assembled, washed, seasoned and set up for cooking, we were ready to cook our first meal in the Presto Kitchen Kettle.

The photo shown here is an overhead view with the glass lid with knob and the two small side knobs both in place. 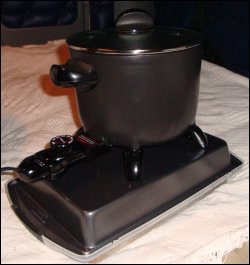 Here, you will see that we set the unit on the up-ended and covered 9×13″ baking pan in which we had prepared Amish Baked Oatmeal.

(In the Food and Recipes section of our site, you will see that in the “Equipment we used” section, you will often see a “cutting board” listed, which we switched to using as a cooking surface.)

The only improvement that we would make to this product is to provide some way for the hot pot to be lifted with one hand, such as with a long handle like a standard pan has.

As it is, because the knobs are short, the pot requires two hands for lifting, leaving a solo cook with no hand free to remove food.

We think that perhaps an easily attachable long handle should be designed to fit around an attached knob and loop over the upper edge of the hot pot for this purpose.

We found the design of the electrical cord quite interesting.

Unlike the one-part cord used by our electric skillet, this one has two parts, being connected together by a magnet.

If one is not careful during cooking, a bump against the cord could break the magnetic seal and interrupt the flow of electricity to the pot (and hence stop the cooking process).

Once one is attentive to this design, that isn’t a problem.

The unit is easy to clean inside and out.

We are being very careful to use cooking utensils that will not scratch the non-stick finish.

Our First Meal Cooked in the Presto Kitchen Kettle 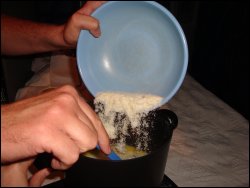 With Vicki holding the hot pot to make sure it did not tip over, Mike poured potato flakes into the water/salt/butter/milk mixture that was prepared according to directions.

Later on, after we got a good-sized cutting board to use as a cooking surface, it was no longer necessary for us to be as careful about not tipping it over.

The design of the legs on this unit make it very stable. 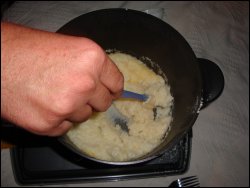 In this photo, you see that Mike stirred the potato flakes into the liquid mixture.

The hot pot did an excellent and very fast job of heating the water.

Once the potatoes were cooked, we moved them to a bowl and set the hot pot’s lid on top to stay warm.

We did not clean the hot pot between fixing the instant potatoes and heating up the entree. 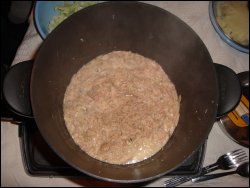 The next overhead photo shows some pork cooking, which we had previously cooked in a crock pot, divided into suitable sized containers and frozen.

All we needed to do was remove it from the freezer, let it thaw out in the ice chest and re-heat it.

Vicki learned during the heating of the entree how well the electrical cord works.

She adjusted it up and down to see at what point the mixture would start to boil.

If we had not had this hot pot, we would have prepared our meal by warming the liquid mixture for the instant potatoes and the pork in the microwave.

However, Mike notes that it would have taken much longer to do so.

He is very impressed with how quickly the Presto Kitchen Kettle heats.

And because the unit is made of aluminum, once it is empty, it cools down fairly quickly, too.

In a previous truck that Mike drove, we stored the unit under the bunk.

In later trucks, we stored it in one of the cabinets.

If You Want to Purchase the Unit 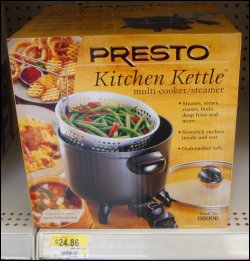 Please bear in mind that although we have an Amazon.com link to the Presto® Kitchen Kettle™ on this page, their cost may be more than what we paid for the unit at Wal-Mart back in 2009.

You may wish to look at prices of products on Amazon.com, with which we have an affiliate relationship.

Money saving tip: Before you buy any appliance to use in your truck, make sure that you have the power source to make it work.

For example, there is no sense buying a product using 1200 watts if your inverter supplies only 700 watts.

The reason why we mention this is because some truck stops sell combination packages like an inverter and a microwave oven.

There are also differences between inverters.

If an appliance you want to use uses more power than you can currently supply, consider getting a higher-powered one, if your trucking company allows it.

Consider the long-range implications of the product that you buy.

For example, think of all the different kinds of meals that you are likely to prepare in your truck.

Having a high-sided hotpot like we were looking at may not be what you need.

If you like soups and stews that take less room, you may want a smaller hot pot.

Remember, though, that just because a hot pot is smaller doesn’t mean that it will cost less.

Prices and features vary from product to product and store to store.

To prevent spills (and the cost of your time to clean them up), you may want a unit with a “tip-proof” base.

We have never set up the unit featured on this page to operate while the truck is in motion, so we cannot provide guidance on that score.

If you need to brace a hot pot, make sure you do so in such a way that you will not create a fire hazard.

If you are looking to increase the number of vegetables you eat — but you like them cooked until they are “crisply done” — consider a unit with a removable basket (which acts like a colander) to quickly remove the foodstuff from the boiling liquid or from over the steam source.

As always, when dealing with hot materials, give them sufficient time to cool down before eating or discarding them.

For example, disposing of liquids that are too hot in a portable toilet can damage it.

Oils cook at hotter temperatures than water, so plan ahead.

Also, make sure that when you dispose of used oil that you do so in an approved manner and location.

Return from Hot Pot Review: In-Truck Use of the Presto Kitchen Kettle to our Meal Preparation page or our Truck Drivers Money Saving Tips home page.

On Cash Advances: Pros and Cons for Professional Truck Drivers