Using a DC to AC power inverter in your truck allows you to run many appliances just as you would at or in your home. 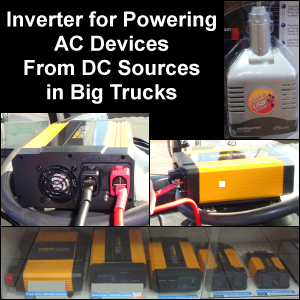 For professional truck drivers, the most common inverters are

Because of the number of appliances we have used in our trucks over the years, we consider such a device to be an essential component of our packing list. 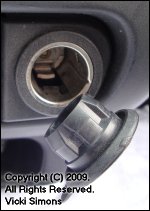 When Mike drove for Schneider National, the company prohibited battery-powered inverters but allowed the use of a small one that could be plugged into a cigarette lighter.

The amount of power that can be drawn from a cigarette lighter can be much smaller than that drawn directly from the battery.

Before you invest in any inverter, check your company’s policy.

One source we read stated that
– small inverters are those that pull 400 watts or less and
– no more than about 150-180 watts of power can be drawn from a cigarette lighter.(*)

The cigarette lighter plug-in inverters that we have found in truck stops are powered to deliver up to about 175 watts and the battery connected style from about 200 watts up to 3,000 watts. 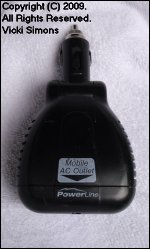 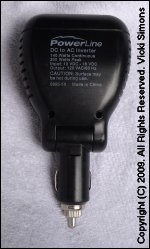 These images show the front and back of the 12-volt unit that Mike used in his truck during the time he drove for Schneider.

The stated amount of power this unit can provide is 140 watts continuous and 200 watts peak. 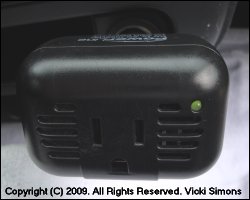 When the engine is on and this unit is plugged into the cigarette lighter, the indicator light glows green (showing that it is ready), as shown.

With this small unit, Mike could at least use a small AC-powered crock pot.

Besides using an AC-powered device, the only other option we know of for cooking in one’s truck is to use a DC-powered 12-volt appliance (one with a 12-volt plug).

As you may already know from reading our Pot ‘n Pop page, our first experience in cooking in our truck had mixed results.

Shown here is a plug-in style inverters providing up to 150 watts of power, provided by Amazon.com, through which we have an affiliate relationship.

Using a larger power-inverting device gave us the flexibility to use the kinds of kitchen appliances that we use at home.

Professional drivers may be more likely to use inverters connected directly to their truck’s batteries.

Our first one was a 1750-watt Portawattz, which we purchased brand new from a truck stop (Pilot Travel Center) in July 2000.

There are slots on the base on the front and back of the unit for anchoring the unit to, for example, the floor under your bunk, should you desire to do so. 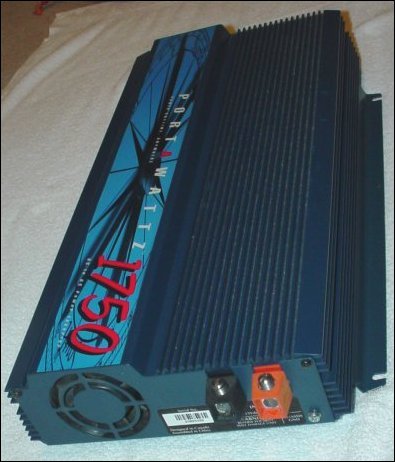 You can see on the right side of the unit the vent and the terminals where the wiring kit cables connect. 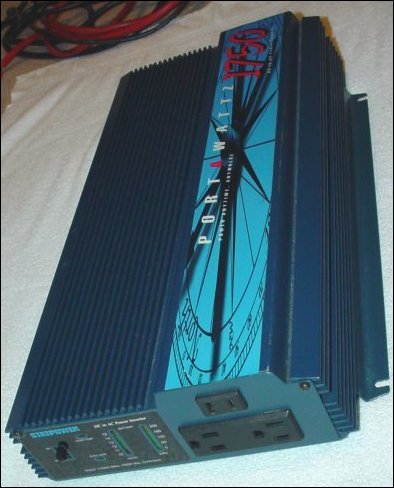 On the left side, you can see:

Instead of plugging appliances directly into his inverter, Mike has plugged in a surge protector strip with an on/off switch.

Using a surge protector, one can

It should also be noted that the inverter units we have had all emit a warning signal when it is drawing too much power.

Mike said that in one of his trucks when an appliance drew the maximum continuous load of power, the lights inside his truck dimmed!

The cost of power inverters is much more affordable today than they used to be.

By the time Mike went back to work for one trucking company, they had instituted a policy limiting the amount of wattage drawn to no more than 1500.

So we invested in a lower powered one.

For reasons he does not understand, the first 1500-watt unit Mike bought stopped working and he had to replace it.

When that one had problems (see “Updated info” below), he bought a third, a Power Drive like the one shown here.

One of Mike’s trucking companies offered to install his unit for him.

When they did so, they also installed an in-line fuse between the cable and the battery connection.

This was designed to protect the inverter.

If your device meets your company’s specifications, they may install it for you.

Not counting the installation of the fuse or breaker, installing this kind of device in your truck is as simple as

Make sure you read your owner’s manual for the correct installation of your machine.

Our second RoadPro inverter worked very well until something got a little too close to one of the connections between a cable and the unit under the bunk.

When last we checked, RoadPro units were still available in some truck stops, but we have found that the predominant brand on sale is Power Drive. 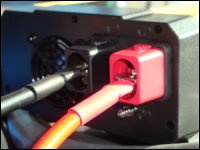 We had some issues with the 1500 watt Power Drive unit we bought as a replacement, but it worked well until the fuse that connected the red cable to the battery blew.

We published a page on inverter troubleshooting that detailed the saga.

One of the things that we especially like about the Power Drive model is that it has sheaths or “sleeves” to fit around the connections between the inverter posts and the cables.

These sheaths keep things from touching the connections and shorting it out (like what happened with one of our RoadPro units).

Be aware that a power inverter does not generate its own power.

It simply inverts the energy from DC (direct current) to AC (alternating current), the latter of which is commonly used throughout the United States.

You will want to limit your choice of appliances to use in your truck to those that draw the maximum “continuous load” (as opposed to “starting” or “peak” load) wattage.

He cannot operate an appliance that draws more power.

The box that your device is packed in may have a chart that shows the number of minutes that a specific appliance can be run based on a number of factors, including the size of the battery.

Appliances You Can Run

The operating time for an appliance to run via battery-connected inverter power without the engine being on will vary by the amount of power drawn.

Consider the various types of appliances that you as a driver may need or want to charge or operate in your truck:

Note: Our blue blow dryer operates at a maximum of 1750 watts of power on high.

However, on the low setting, it takes less power.

So when we were once caught in the rain walking from a truck stop back to the truck, we towelled off the best we could, plugged in the blow dryer, set it on “low” and turned it on.

We were able to dry our hair just fine.

Money saving tip: We encourage you to go comparison shopping to get the best value for your money.

Feel free to use our Inverter Comparison Table (available through our Free Downloads page).

Above the table, you will see a space where you can fill in the “maximum watts of power you need / allowed by your company.”

From there, you can get these suggested specs on as many units as you desire:

Bear in mind that sales tax varies from state to state. You may find a list of sales tax rates by state here.

When you get ready to buy your unit, consider:

Bear in mind the vendor’s return policy and/or warranty information on any unit you may buy.