In 2010, Mike’s trucking company installed an Arctic Breeze Truck AC on the company truck he was driving in an attempt to help him lower the amount of idling he was doing to stay comfortable. 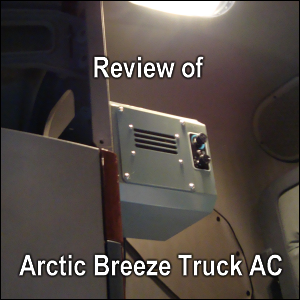 The company’s freight lanes ran (at least at that time) from south Florida to Maine and from the East Coast to the Midwest in the USA, where the temperatures can vary widely.

While the trucking company is located in North Carolina, we hail from South Carolina, where it can get very hot in the summer. 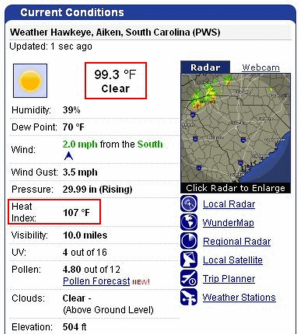 The screen capture from Wunderground.com at left — which was taken on June 16, 2010 and to which red boxes were added as a help — shows that the temperature in Aiken, SC, was 99.3°F and the heat index was 107°F.

So Mike wasn’t just idling for no reason.

There are numerous climate control devices for commercial motor vehicles on the road today.

Many people are familiar with diesel-powered devices known as auxiliary power units (APUs).

The Arctic Breeze Truck AC is not an APU.

It is, as their website states, a “12V battery-powered air conditioning system that keeps truck cabs cool without idling the engine.”

Let’s explore the installation, usage, pros and cons of this climate control device. 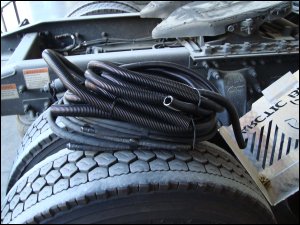 Resting on the front set of drive tires is the tubing and wiring that will run from the control unit inside the truck to the outside unit mounted on the truck’s frame. 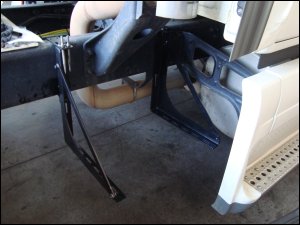 This photo shows the mounting bracket for installing the outside unit of the Arctic Breeze Truck AC. 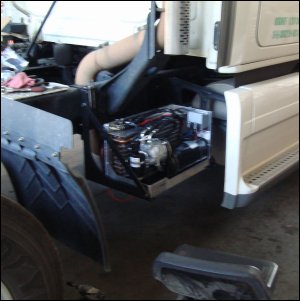 Most of the outside unit has been installed on the mounting bracket behind the passenger side fuel tank. 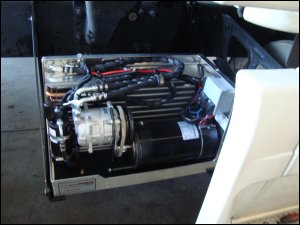 This is a close-up of the outside unit without its cover on. 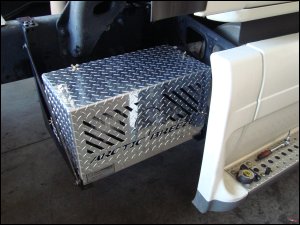 With its cover on, here is what the outside unit of the brand new Arctic Breeze Truck AC looks like, installed on the mounting bracket on the tractor’s frame. 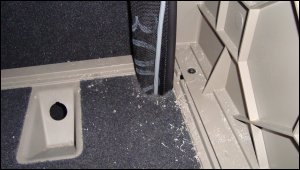 The tubing and wiring had to be run down through the cabinets on the passenger side of the tractor. This required some drilling. 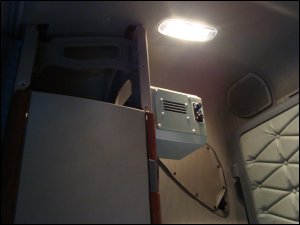 Here’s what the Arctic Breeze Truck AC’s control unit looks like installed inside the tractor.

Vicki was concerned that the upper bunk (which is up against the wall in this photo) would not be able to clear the unit, but it does!

The only real inconvenience this unit’s placement caused us was the sudden loss of accessibility of the hole in the cabinet from which we used to hang clothing like sweat jackets and winter coats.

Since the top panel of the cabinet has been removed in this photo, you can see the hole that became inaccessible to us. 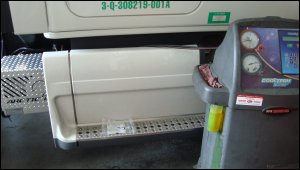 Jimmy, the mechanic who installed the Arctic Breeze on Mike’s truck had to pump refrigerant into the unit. 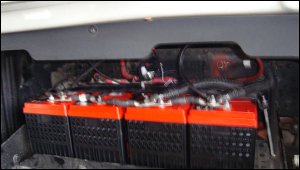 Since the device is powered by a 12-volt source, a brand new bank of 6 deep cycle batteries were installed.

At left is a photo of the four batteries that were installed in the Freightliner Cascadia, behind the panel that also serves as the steps on the driver side of the truck. 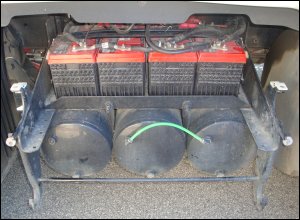 Here’s another photo of the four deep cycle batteries installed under the driver’s seat. 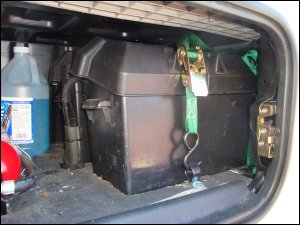 The other two deep-cycle batteries were put in cases and strapped down under the bunk.

When we had originally heard about installing batteries under the bunk, we thought we’d have to lose food storage space from the center compartment.

However, Jimmy the mechanic gave the option of putting them in the side box on the driver’s side.

That’s where Mike opted to have them installed.

About the Arctic Breeze Truck AC

One page of the manufacturer’s website lists all of the specifications.

Now, it must be understood that since this system is totally powered from the batteries that the batteries must be charged before the unit can operate.

Mike was told that the batteries must be fully charged before the unit can run for the first time and that this would take several hours to accomplish.

Not only that, but the batteries need to maintain a certain charge in order for the unit to continue to operate.

So, the claim that there is “no engine noise” and “no diesel emissions” is only true after the truck is turned off.

Obviously, the truck must be running to charge or re-charge the batteries.

This tractor trailer truck air conditioning unit will use on average 350 watts/hour.

Usage will vary, of course, based on conditions.

If there is a heavy draw on the batteries, the truck will need to be turned on more often in order to re-charge the batteries.

This could be a problem in no-idle zones.

Of course, some drivers will not be operating the truck’s air conditioning (AC) only when they are on their 10-hour rest breaks.

Running the AC could occur any time that the truck is parked, is warm and drivers want to be cooler — such as at a shipper’s or receiver’s facility in the heat of the day.

It would be tremendously inconvenient for the unit to conk out due to lack of battery power during the time a driver chose to rest or nap.

Many states have passed legislation to allow trucks to have an extra 400 pounds for an APU on commercial motor vehicles without penalty.

The Arctic Breeze Truck AC is said to weigh 194 lbs (88 kg), which is well under this weight limit.

The unit does operate quietly, but those inside can still hear it cycle on and off. 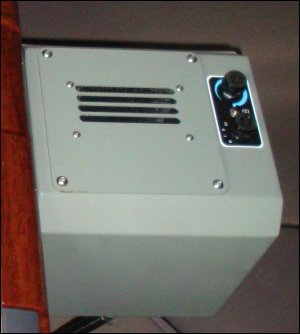 You may or may not be able to tell from the photo at left that the air vents on the front of the control unit — which is mounted on the rear side of the cabinet behind the passenger seat — flow in one direction only:

Straight out and slightly down.

Because of the direction of the air vents, there is no air circulating throughout the cab.

This can be a problem when the whole cab is hot and needs to be cooled.

On one particularly hot day in the summer of 2010, Vicki attempted to attach something to the unit to help divert the air to the front part of the tractor where Mike and she were seated, but she had no success. Not even the small fan we had plugged into the inverter was able to move the flow of air very well because of the direction of the air vents.

Mike noted that the device’s air vents were directed toward the driver’s side of the tractor, the direction most drivers orient their heads when they lie down.

Because of this, the air coming from the unit could be felt by someone lying down — whether on the top or bottom bunk.

Light sleepers might have difficulty dealing with a direct flow of air toward their faces.

When it was moderately warm outside, the Arctic Breeze Truck AC worked well to maintain a cool cab throughout.

When it was hot outside, the unit was unable to keep the whole cab cool.

At times like this, the Arctic Breeze Truck AC worked ok to cool the sleeper berth area when the curtains separating the sleeper from the front part of the cab were closed.

However, it is hard for a driver to keep an eye on the light on the dock — which indicates that the shipper has finished loading or a receiver has finished unloading his/her trailer — when the sleeper curtains are pulled closed!

We have run the unit off battery power until it clicked off by itself.

This is not hard to do when one is waiting for a load and it is hot outside, even when the provided windshield sun shade was in place! 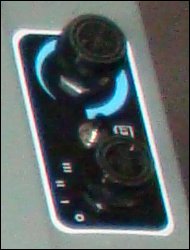 The control unit has two knobs and one button. We will call the knobs:

It is up to driver preference as to how to set the temperature and output dials for the desired level of comfort.

There is no thermostat on the unit.

The reset button is for resetting the unit.

It is only to be depressed when the Arctic Breeze Truck AC clicks off by itself and the truck needs to be turned on to re-charge the batteries.

The Arctic Breeze Truck AC is no APU (auxiliary power unit) or genset.

What that means is that it is a climate control device alone that provides no electrification whatsoever.

If climate control is all you need, fine. But for others of us, it is less than desirable.

If a driver decides to run an electrical appliance via power drawn from the batteries through an inverter, the use of that appliance will reduce the battery power available to run the Arctic Breeze Truck AC.

This can be a real problem for drivers who like to cook in their trucks to save money, especially if they are in “no idle” zones.

Tests Against Other Climate Control Units?

We wonder if head-to-head tests of diesel usage between the Arctic Breeze Truck AC and an APU have been made:

These questions should be among those answered in such a test:

While this unit has a dial temperature control knob, this device is obviously a truck air conditioning unit, designed to keep the tractor cool.

According to the manufacturer’s website, this unit can be connected with a truck’s heat source.

However, in Mike’s truck, it was not connected to — nor was it intended to be connected to — an in-cab bunk heater (which had been installed separately).

Truck owners need to be aware of the limitations of different climate control devices for year-round use. 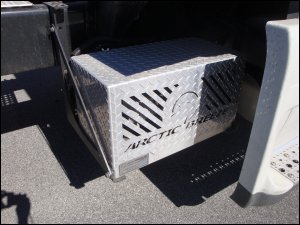 The cost of the unit itself — as purchased by Mike’s trucking company — was about $4,000.

That comes to a total of $5,800 — not including the cost of the mechanic’s time to install it.

Nor does this take into account any long-term maintenance costs or part replacement costs.

For just a little more money, Mike’s company could have invested in an APU that

It is clear that the Arctic Breeze Truck AC can save a truck driver or his/her trucking company money when compared to idling for comfort.

The amount of money that can be saved depends on many factors, as described above.

The company’s website has a calculator upon which cost savings can be estimated, but it assumes perfect conditions.

There is no exemption we’re aware of in any state’s anti-idle law for idling a truck to recharge its batteries to run a battery-operated air conditioner.

Just because the unit conks out from lack of power and you have to idle to recharge your truck’s batteries to get it working again may not keep you from getting a fine.

Money saving tip: When you are considering a system of climate control in your truck, consider all of your needs in advance, especially as it concerns electrification. Will you be shortchanging yourself by investing in one but not both?

Take into account all of your climate control costs, including the usage of diesel to charge the batteries while sitting still. Figure long term usage.

Calculate into your costs the lifespan and replacement of the deep-cycle batteries you will need.

The needs of each driver will vary based on where he/she runs his/her truck. In hotter climate areas, drivers concerned about staying cool will run a climate control device more often.

Consider the portability of a climate control unit. Can it be moved from truck to truck? What are the pros and cons of this?

Will the owner of the truck also have to invest in a separate heating unit of any kind to run in the winter? If so, what kind? For how much?