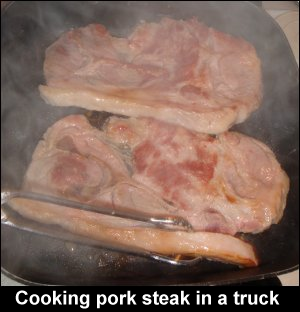 When Mike was growing up, he said pork chops were for rich people. So, cooking pork steak was the next best thing.

Going with this cut of “the other white meat” saved money but was in no way a compromise on taste.

We’ll show you how Mike makes it in just one pan and share other tidbits of info.

This is one of the easiest entrees to prepare. It just takes a bit of time to make sure that the pork is cooked all the way through.

When we have purchased packages of pork steak at a grocery store, the pieces of meat have been pretty good sized.

In fact, there have been times when just one steak will be enough for both Mike and Vicki, especially when we fill out the meal with vegetables and a side of rice.

The steaks we have bought have a bone running through them.

We’ve never had difficulty cutting the meat off the bone.

However, in cooking pork steak, there may be a tendency for the meat to curl a little in the pan. 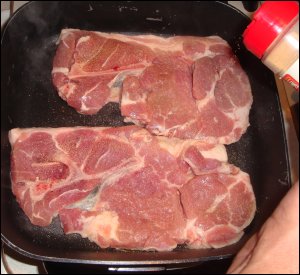 Mike places two of the four steaks into our square electric skillet. 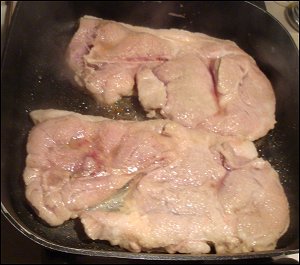 He turns up the heat to 350°F to cook and puts the lid on the skillet.

Here, the pork steaks have started to cook through, but you can still see pink. 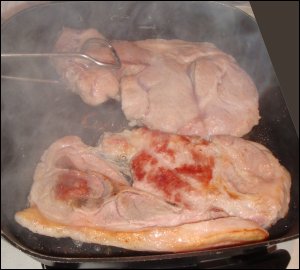 Mike limits the number of times he turns the meat while cooking pork steak.

The piece in the foreground has already been turned and he is in the process of turning the other. 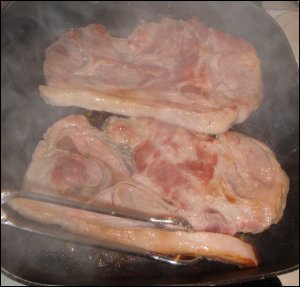 Both sides of the pork steak have browned a bit and Mike knows from experience when they are done.

Sprinkle salt and garlic powder to taste on pork steak (on both sides) early on in the cooking process.

Cook in an electric skillet, turning minimally, until done.

Important note: The parasitic disease called Trichinosis is caused by eating raw or undercooked pork or wild game infected with the larvae of a specific roundworm. You can prevent the infection by properly cooking your pork.

We have purchased pork steak for around $2 per pound or less.

However, the price per serving depends upon the cut and your appetite.

We have never seen pork steak offered on a truck stop buffet or in a menu.

We would hazard a guess that a pork steak the size Mike makes — with all the trimmings — would probably cost $8.99 or more at a truck stop restaurant.

Additionally, the only pork offerings we’ve seen on a truck stop buffet have been sausage, bacon and ham for breakfast, and ham slices/steaks for lunch and/or dinner.

Money saving tip: Pork steak can be eaten as soon as it is done cooking — or cooled, frozen and reheated.

This is a perfect entree for a professional truck driver’s home support team to fix in advance and pack in an ice chest for reheating and eating on the road.

Putting the lid on the electric skillet helps preserve the juiciness of the meat while cooking.

There are other cuts of pork like ribs to make barbeque pork or Boston Butt pork roasts.

There are also different meal preparations, depending on the cut.

Pork steak requires a bit of time to actively monitor the cooking process whereas a crock pot-cooked piece of pork does not. Make sure you take this into account as you travel.

We use tongs with rounded edges whenever possible when cooking pork steak so as not to scratch the non-stick coating in the electric skillet.

Some people prefer to use cookware without a non-stick coating for health reasons. If you are among them, you may wish to add a bit of oil to your skillet before cooking.

Pork steak can easily be warmed up in a microwave oven.

You may use other spices to season your meat.

Two possible seasoning options to consider would be regular black pepper (in addition to salt and garlic powder) and lemon pepper.

Mike would use the lemon pepper as a seasoning by itself. (Note: Lemon pepper we have seen in grocery stores typically has monosodium glutamate [MSG] in it. If you are sensitive to this, as Vicki is, please be aware of this.)

We have found that low cost spices work just as well as the name brand ones.

Return from Cooking Pork Steak: Making a Delicious Dinner in Your Truck to our Food and Recipes page or our Truck Drivers Money Saving Tips home page.

USB Adapter Tips for Use in a Truck

Things Only Humans Can Do

The Investment Advice That Led Us to Fulfilled Dreams

Polish Sausage and Sauerkraut: A Satisfying Meal in Your Truck