Among truck accidents that can take place, a deer collision and other animal collisions must not be forgotten. 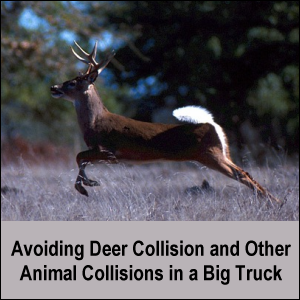 We read an article on February 19, 2010, about a truck driver who swerved to avoid hitting a deer around 3 a.m. and flipped his rig, setting the stage for another truck to hit it and lose its load.

This was costly for both trucking companies, drivers and the businesses whose loads were damaged.(1)

While the Insurance Information Institute has information on its site related to deer collisions, it does not distinguish between the types of vehicles which strike the animals.(2)

According to the site:

What Can You Do to Help Avoid Colliding With Animals on the Road?

Be alert for animals:
– whenever you see a deer or moose sign, which may be where collisions have happened the most in the past;
– in states where there are heavy populations of animals;
– during the animals’ active times, especially early morning and early evening;
– during mating season; and
– wherever you have seen animals in the past. 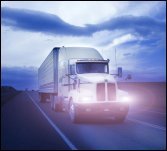 Further tips to help you avoid a deer collision are:
– Do not overdrive your headlights.
– Do not flash your headlights.
– Sound your horn.
– Be prepared to stop.
– If you have to stop, brake smoothly.
– Don’t swerve.
– Don’t rely on “deer alerts” to warn animals of your approach.

We’ll be the first to admit that we have had deer run out in front of both our personal vehicles and the large trucks we have driven for our trucking companies over the years.

Sometimes an animal will dart out in front of you with no warning whatsoever.

In February 2015, Vicki was driving our car in a rural part of South Carolina on the way back home from a business event. Because the car was traveling at 55 mph, when a deer suddenly appeared, two things happened:

1. The deer was struck (and consequently died); and

2. The car was totaled and needed to be towed home.

Vicki has observed that sometimes deer will also be out and about in broad daylight.

Be on guard for deer and other animals along the road at all times of the day and night.

We would like to hear from truck drivers who have large bars (grill guards?) mounted on the front of their trucks to help prevent damage to their vehicles in the event of a deer collision or other animal collisions.

How well do they work?

Still, the best policy is to avoid hitting an animal altogether.

An article on this subject — “Deer in the headlights” — was published on November 10, 2011 on Fleetowner.com.

In the article cited above, there were two trucks involved in the accident: Driver #1 swerved because of the animal; Driver #2 let his hit truck #1 because he could not stop in time.

Do not tailgate the vehicle in front of you or follow so closely that you cannot stop in the event that traffic stops.

Mike relates the true life account of how he was driving the truck for his trucking company on a back road in South Carolina late one night.

He was following a car with sufficient following distance to stop.

He was also being followed by another car that was tailgating him.

The driver saw them, swerved to avoid a deer collision and braked practically simultaneously.

When Mike saw that, he automatically started braking.

The deer passed between the first car and Mike’s truck.

Mike did not know how the driver of the car behind him avoided hitting him because he’d been following too closely.

(Mike had previously attempted to get the second driver to either back off or pass, but he had done neither.)

After the deer darted across the road, the second driver backed way off.

Return from Avoiding Deer Collision, Other Animal Collisions in a Big Truck to our Truck Operations page or our Truck Drivers Money Saving Tips home page.

Free Truck Parking for Truckers at Shippers and Receivers