Are you a driver without climate control alternatives parked in an anti idling (or no idling) zone? 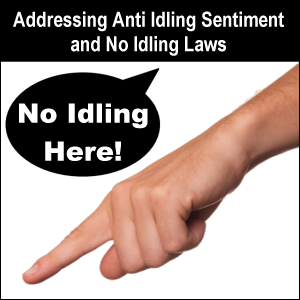 How do you know? What should you do? We address some aspects of this topic on this page.

Many states in the USA (as well as other jurisdictions) have passed anti idle laws or ordinances. Penalties for violating them vary.

Although the website MakeALeap.org (which was dedicated to “Lowering Emissions and Particulates”) appears to be missing as of October 2015, its YouTube channel still has videos listed.

Reasons for Limiting or Eliminating Idling

Among the reasons for wanting to limit or eliminate idling are:

One of the strictest agencies (if not the most strict) in the USA regarding large truck idling is the California Air Resources Board, which even back in 2009 was known to clock idle times and issue fines.(1)

For further study, you may wish to visit the EPA’s National Clean Diesel Campaign website where there is information about the Diesel Emission Reduction Act (DERA).

One is apt to see a variety of no idling signs (indicating the anti idling law in that jurisdiction) in many places where commercial motor vehicles park. Here are some that we’ve found. 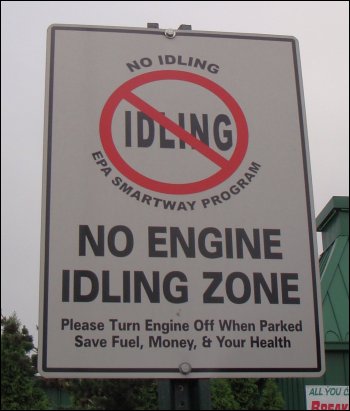 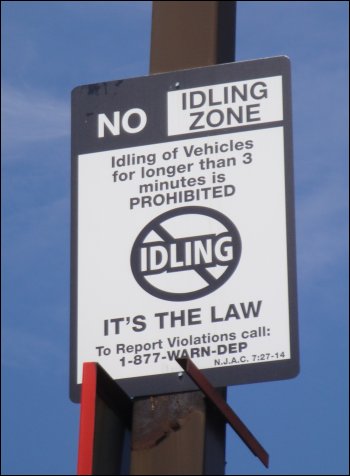 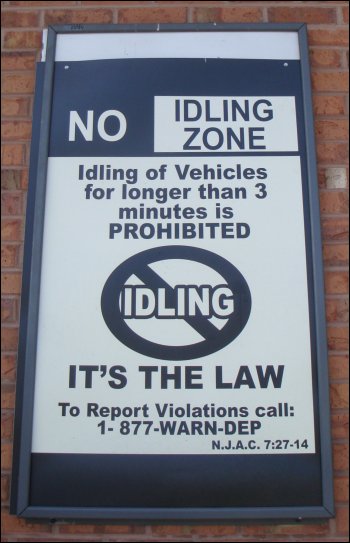 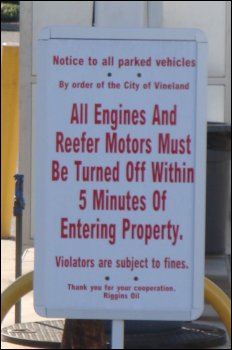 Notice that violators of anti idling laws are subject to fines in one area and a phone number is available to report violators in another.

Prohibitions Other than Anti Idling

Mike met a driver named Gary in May 2010 who had a certified clean idle decal on his truck but said that he could not idle his truck for comfort (climate control) without being punished.

How would he be punished?

Even though Mike and Gary were parked in a state that provided an exemption for idling for trucks with a clean idle decal, Gary didn’t idle that night because he said that if his idling rate rose above some pre-determined percentage, the company would automatically reduce the speed at which his truck could run.

In other words: A lower top speed means fewer miles covered in a day, which means a lower paycheck. Punishment.

Why did Gary put up with these conditions? For him, it was more important to have a higher rate of pay than to be comfortable during his sleep break.

Let’s do a little comparison:

What’s the long-term difference between Gary and Mike?

Gary was sacrificing personal comfort by being in a hot truck for this much money per day, week, month and year.

This is not an insignificant amount of money, but one must also factor in one’s health and well-being.

We know of people who pay more for this to heat and cool their homes every month.

We wonder if Gary ever took the time to calculate this, or the cost to his body of not being comfortable during his sleep break.

Furthermore, a lack of being able to sleep better can have a real impact on your ability to focus while you work.

Before You Hire On

Drivers need to be aware of certain questions to ask when they talk with trucking company recruiters — including provision of idling alternatives.

Trucking companies have every right to

But it may come at a price for their drivers.

It seems to us that companies that are focused on profit rather than people will find a hollow victory in the end.

It could even be called downright hypocritical when they themselves enjoy the creature comforts in their offices that they deny drivers in their trucks — especially when idling alternatives are available.

Separately, we provide driver empowerment on this issue as well as provide a win-win proposition.

Money saving tip: If you do not feel like “pressing back” or risking taking a chance of getting a ticket in an anti idling jurisdiction or no idling zone, either don’t idle or seek an idling alternative.

Many truck stops are becoming equipped with at least some alternatives.

There are also APUs and other battery-powered climate control devices available.

Perhaps you need to help your trucking company understand the adverse effects on a driver’s health that can result from being in a hot truck.

Go See What You Can Scrounge Up