If you’ve read our mutual expectations page, you know that Mike’s first driver trainer didn’t do a good job of training him.

Teaching Experience Leads to Interest in Being a Truck Driver Trainer 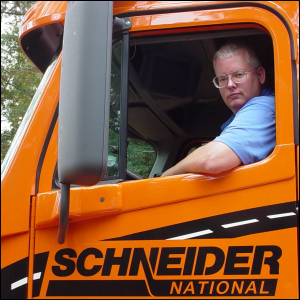 As someone with teaching experience, Mike firmly believed that he had it in him to train trucker trainees (student co-drivers).

In 2006, he began the process of becoming a “training engineer” with Schneider.

He voluntarily pulled out of their program because (at least as of the time he started) the company expected trainers to run the same number of miles as a solo, be paid by the mile and receive additional pay per day for training.

(That kind of emphasis is not truly on training, but running miles.) 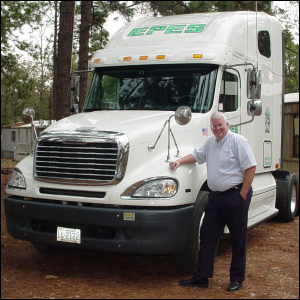 After he was rehired by Epes Transport, Mike successfully became a training engineer.

At that trucking company, engineers were expected to focus on training and were paid a salary (instead of by the mile).

This was the emphasis Mike was looking for.

He trained four trainees (student co-drivers) before realizing that he didn’t like sharing his in-truck living space with anyone except his wife Vicki.

What’s more, Mike found the driver manager who supervised the trainers’ fleet to be difficult to work with.

Most importantly, Mike couldn’t handle the attitude of some trainees who thought they knew more than he (as an experienced driver) did.

Still, the experiences he had were rich. What follows on this page are some thoughts about motivations for wanting to be a truck driver trainer and a summary about the student co-drivers he trained.

Examining Your Motives for Becoming a Driver Trainer

If you’re interested in being a driver trainer, the big question you need to answer is, “Why do you want to do this?”

It must be stated that there’s nothing wrong with staying as a solo driver who is happy right where he or she is for many years.

There is some incredible untapped talent within the trucking industry but the folks with this talent don’t want to share their trucks with someone else.

These folks are excellent consultants from whom others can ask advice.

Please note that student co-drivers’ names have been abbreviated to first and last initials to protect privacy.

It was at this point that Mike realized he didn’t like sharing his truck with anyone but Vicki.

The Training You Deserve to Have 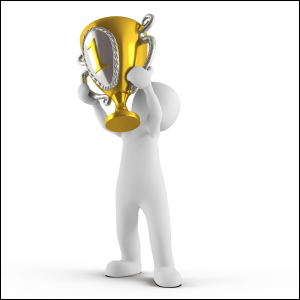 If you are currently undergoing truck driver training, plan to go through it soon, or have hopes of getting your CDL, here is our advice regarding your trainer:

you need to have one who can show you “the ropes” and show you not just how to survive, but how to thrive and be successful!

You need a driver trainer who will help you to apply what you’ve learned in school, not just tell you to forget it all, because “he’s going to show you ‘the real world of trucking.'”

Your driver trainer must be a valuable resource who will teach you almost everything it takes for you to be successful and profitable.

Of course, there are those situations that none of us can expect, but your trainer should be able to give you some solid answers, instead of continually answering “I don’t know” and brushing aside your questions as though they don’t matter.

He/She should be a person who isn’t intimidated by questions, because you’re going to have A LOT of them, and those questions need to be answered.

We tell you all of this because, quite frankly, we didn’t get it in our training.

And that’s a crying shame because we certainly weren’t prepared when our time came to go out as a team.

What We’re Offering You

When Mike was a trainer, he developed a series of sheets which we’ve adapted and are making available to you through our Free Downloads page.

In this way, we hope to assist both truck driver trainers and their driver trainees work through some mutual expectations and have some solid guidelines on how training should be done.

If you’re a driver trainer and you do a poor job of training, word will probably come back to your company.

You could be temporarily or permanently suspended from your training position, which could mean reduced paychecks.

Not only that, but with the tendency of some trainees to blog about their experiences, word could go out very quickly about how you fail to do your job well.

If you have not already done so, consider going through a “train the trainer” type training program or refresher class.

You can also take education classes to help you become a better teacher.

Truck Driving Jobs and Truck Driver Jobs in the Future

Local Truck Driving Job: How to Find One For Free