It was the chili’s fault. Really. 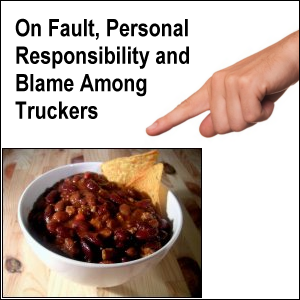 So claimed the professional driver who choked while eating it while he was rolling down the road behind the wheel of a big truck.

All was well until he lost consciousness and crashed into a house.

Sure, blame it on the chili, dude.

Never look at your own actions.

Serious Questions and the Obvious Answer 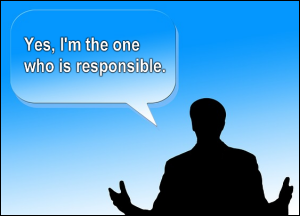 Could your truck accident have been the direct result of you trying to multi-task?

Wasn’t it more likely that you were a distracted driver — especially since in order for you to eat chili you probably had to use both hands, one to hold the cup or bowl and the other to spoon the food to your mouth?

Your crash, sir, was your own fault, not the chili’s and not your choking.

You chose to eat while driving.

It’s time to stop passing the buck on things like this.

Please realize that you are driving a commercial motor vehicle.

You are being paid to safely transport freight from one place to another, not “fill in the blank” activity while you are driving.

Texting is now outlawed for all professional truck and bus drivers.

But there’s all the other stuff that distracts you, too.

Some drivers also try to blame others for their own financial situations.

“So and so did me wrong,” they claim.

But it was their own failure to plan in advance that landed them in hot water.

We don’t buy the excuse that it’s the fault of the credit card companies when people can’t pay even the minimum payments.

Who was the one who racked up all that credit card debt in the first place?

Regarding finances, we know that everyone has to start somewhere.

If you need help on budgeting or saving money, we’re here to help.

One of the ways that we can help is by providing you with ideas on food and recipes and meal preparation.

Instead of trying to find fault with everyone else, put the magnifying glass back on yourself.

Get out and look.

A mature adult, not a kid, is willing to ‘fess up to his or her own shortcomings and be willing to do something positive to overcome them.

The highways and byways that you travel demand personal responsibility.

If you can’t meet the challenges and exhibit some intestinal fortitude, you don’t need to be out here driving for a living.

It’s not always the company’s, broker’s or shipper’s fault.

You are not an amateur.

You’re supposed to be a professional.

You may recall the case of a truck driver who violated the federal hours of service regulations, was tired and watching streaming pornography on his laptop when he hit a woman on the New York Thruway.

She consequently died as a result of her injuries.

He faces second-degree manslaughter charges and will most likely never drive professionally again.(3)(4)

It definitely was not worth the woman’s life!

Her death was his fault.

Then there was the case where a lorry driver was caught eating a bowl of cereal behind the wheel of his vehicle, using both hands for eating.(5)

While this particular incident didn’t result in an accident, another situation in which a truck driver was eating cereal while driving might have contributed to his accident!

Another driver blamed his crash on choking on his coffee.(6)

These situations are totally preventable.

There are at least two frames of reference in most controversies, maybe several or more.

In January 2010, we were washing clothes at a laundromat in North Carolina when an altercation broke out between a female customer and the laundromat attendant.

The customer had supposedly placed her clothes in the dryer and set the machine to run long enough for complete drying to take place while she was gone.

Who knows where she went.

The attendant had been making the rounds of the dryers, removing lint from the lint catchers.

Vicki watched how the attendant did this.

Prior to removing the lint screen (which on these dryers could be cleaned without opening the dryers’ doors), the attendant turned off the dryer, then opened the catcher, scooped out lint, put the catcher back in, then turned the dryer back on.

She did this over and over again for the dozens of stacked dryers at the business.

Vicki did not directly witness the attendant turn back on the dryer with the customer’s clothes.

However, the customer also had no direct proof that the attendant was the one who upset the drying cycle of the dryer she was using.

Who knows what happened. No one was an eyewitness.

However, that didn’t stop the customer from being verbally abusive to the attendant!

After the customer had calmed down, Vicki walked over and engaged her in conversation.

Vicki mentioned to the woman that she stays near her own clothing during the laundering process to monitor the progress of the machines.

In other words, if the customer had simply stayed near the dryers during the entire time, she would have known that something happened and re-started the dryer.

Do a Bit of Analysis

In cases where you are tempted to find fault, take one big step backward to see if there is anything that you could have done differently to affect a different outcome.

Yes, someone else may have thrown a banana peel on the floor, but that doesn’t mean you have to step on it!

Sometimes things happen to us that are beyond our control.

Like the case of the distracted driver who ran a red light in rural South Carolina and hit Mike’s truck.

But sometimes, we are the victims of our own actions.

Be willing to admit it when you do something dumb, look at all angles and seek to improve yourself in all areas of life.

It simply diverts attention from objectively looking at all of the ways that we can improve ourselves.

In the case of the distracted truck driver who crashed supposedly because he choked on what he was eating, the real reason was not the choking but his eating while he was driving.

How much did this cost him?

We don’t know the dollar figure, but repairs to his rig and the house he hit will have to be paid for.

He might have to pay some, whether directly or indirectly.

And since insurance companies are profit-making entities, most likely that means higher premiums for all their customers.

So, we may all have to pay in the process.

That driver may also have lost his job.

Was eating the chili worth it? We seriously doubt it.

How much time did it take to eat that dish? Ten minutes, tops?

He could have eaten it while not driving.

Return from On Fault, Personal Responsibility and Blame Among Truckers to our Truck Operations page or our Truck Drivers Money Saving Tips home page.

Load Straps for Flatbed Trucks: Inspection, Use and Repurposing

Get Out and Look: An Important Safety Procedure in Trucking

Knowing When to Pull It Over and Just Stop Driving in Winter!