In February 2010, Vicki saw utility scissors — aka “heavy duty scissors” — for sale at a national chain truck stop while we were waiting for a shower. 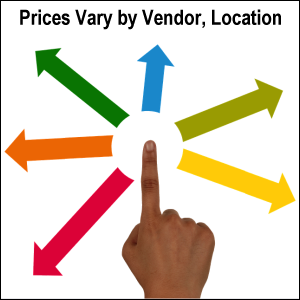 The price really shocked her.

She beckoned Mike, covered over the price, and as he approached she asked him how much he had paid for an identical tool (except for the name brand) that they had in the truck.

Then she pulled her hand away from the price display. He gasped!

Vicki went researching and this page details what she found to answer the question, “how much are other vendors charging” for these utility shears?

Let’s take them in order from least to most expensive. 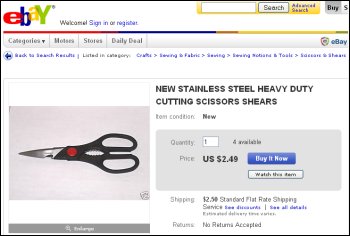 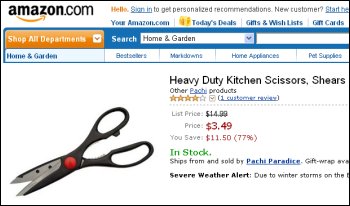 Next up is an identical pair for sale on Amazon.com for $3.49.

Now comes the pair of utility scissors for sale at the truck stop.

Based on Mike’s having purchased his pair for $1.00, this pair is 7 times more expensive!

According to an online “Percent Increase Calculator,” that’s a 599% increase in cost!

Driver, please use your power of observation to determine what is different about this pair of heavy duty scissors.

Other than the little notch on the side of the pair sold through eBay, we see nothing different about the tool itself.

However, there are at least two differences with the last pair:

Have you ever considered that the phrase that appears on this package of heavy duty scissors — “custom built for the professional driver” — is marketing and not necessarily a measure of superiority?

Yes, this pair of utility scissors is supposed to carry a “lifetime warranty,” but bear in mind that for an identical tool, Mike could replace his 5 more times and still not spend as much as these are being sold for.

Now, granted, traditional marketing and most advertising doesn’t really phase us. We tend to be skeptics because we’re looking for good price and good value.

Consider what you would be using your heavy duty scissors for.

If you’re like Mike, you’ll use yours mostly for cutting paper and maybe such things as the thin metal seals you may use on the back of your trailer.

Do you really need a lifetime warranty on utility scissors?

Furthermore, is the lifetime warranty worth an additional 599% increase in cost to you?

No two ways about it: to us, this is gouging.

Frankly, we’d like to see this kind of overpricing practice brought to an end!

Money saving tip: Sometimes you can’t help when you need a tool.

At critical moments, you may be willing to buy it at whatever the asking price is.

But then there are times when you know in advance that you’re going to need something and you can afford to shop around.

In the case of this particular pair of heavy duty scissors, we’re sure that you can get it cheaper elsewhere than at the truck stop, which is selling it for the price shown above.

If you have a home support team, ask them to shop around for you and get the heavy duty scissors with the best value.

Some truck drivers may rationalize that “it’s only 7 bucks.” Well, that may be, but where else can you be putting that money?

Let’s say that you saved $7 a day every day of the year and put that money into an interest bearing account at just 2% compounding annually.

According to a compound interest calculator, with 2,555.00 current principal and adding that same amount every year for 10 years at 2% and compounding 1 time annually, at the end of the period, your savings will be $31,650.60.

What could you do with that kind of money?

Get a feel for what things are worth, not just what they’re being sold for.

Keep your financial goals — the ones you determined during goal setting — in front of you and succeed in saving money.

You’ll be glad you did.

Return from Heavy Duty Scissors: Contrasting Costs Based on Vendor to our Tools and Equipment page or our Truck Drivers Money Saving Tips home page.

Side Skirts for Tractor Trailers to Increase Fuel Efficiency