If you can, get some experience before entering your first winter driving season as a trucker. 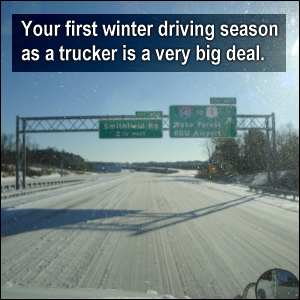 While others may disagree, that’s our own personal advice.

That’s because your first winter driving season as a trucker is a very big deal.

If you’re planning to go to truck driver training school and you have a choice, we recommend that you enter at a time when you’ll graduate in the spring or summer, not in the fall or winter.

It was January when we started driving professionally as a husband and wife truck driving team.

Being from South Carolina, we were not used to driving in snowy mountain areas.

Staying in Touch and Getting Weather Info

We had a CB radio in the truck but didn’t keep it on very much.

And this was way before we had cell phones.

The only other means of communication we had with the outside world were:

Back then, the technology wasn’t nearly as sophisticated as it is now.

Snow in the South?

We were especially unprepared for The Blizzard of 1993 that blanketed the southeastern USA.

I was driving east on I-20 in Louisiana when I observed something I’d never seen before: snow on top of the green grass on the side of the road.

The farther east I drove, the deeper the snow got.

We got stopped at an exit in Knoxville, Alabama.

There was practically nothing at the exit.

Mike attempted to do a U-turn with the truck in a driveway and got stuck in a ditch.

Snow chains would not have helped.

After we got towed out, we parked for the night at a convenience store on the other side of the interstate that was not intended for trucks.

Ours was not the only rig parked there.

Emergency Provisions in the Winter 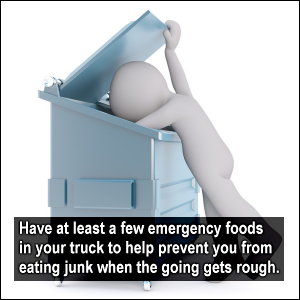 It was amazing when we went into the store what the drivers had chosen to buy food-wise.

We had some food with us, but chose to round out our supply with simple convenience foods like hot dogs and pork and beans.

The next day, we were permitted to go up the road to the Petro in Bucksville, Alabama where we parked for another 2 days!

The power was out at the truck stop, which meant that there would be no restaurant meals served.

The only thing that drivers could buy was what was on the shelves and in the refrigerated cases.

We learned an important lesson with that event: always be prepared with extra food that can be easily prepared and will store well.

When we were eating hot dogs and beefy mushroom soup — prepared in a hot pot — we felt like we were eating like a king and queen compared to guys who had nothing but Little Debbie snack cakes, Twinkies and pork rinds for dinner.

It was amusing but lamentable to hear one trucker exclaim on the CB in a very Southern drawl, “I sho wish I had me a poke chop sammich!” (Translated: “I sure wish I had a pork chop sandwich.”)

What Would You Do?

What are your alternatives if you’re stuck due to bad weather for 2 days?

What will you eat? Good food, junk food or no food?

Even truckers driving during their first winter driving season need to have some rations and the means by which to cook food in their trucks.

One thing that student drivers should ask recruiters is if their trucking company prohibits battery-connected inverter use.

Even though we were somewhat prepared, don’t go through your first winter driving season as unprepared as we were.

A word to the wise is sufficient.

Note: This article — which was originally written and published on January 23, 2014, by Vicki Simons — was updated slightly in 2018.

Tips on Laundromat Use and Doing Laundry by Truck Drivers