When we started out in trucking, each of us was a team driver — first, each with our individual trainers and then together on the road as a husband and wife truck driving team. 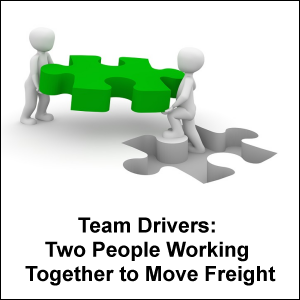 Mike has served as a “training engineer” (or truck driver trainer) for two trucking companies:

We have also had two seasons in which Vicki rode with Mike as a passenger in the truck (not driving it).

In each of these three situations, we were required to “share a truck” — or share the living space in a truck — with someone else.

Since there isn’t a whole lot of space inside even the most spacious trucks, some adjustments may need to be made.

We will cover them on this page.

It should be obvious that the reason why a person becomes part of a trucking team is to try to run twice the number of miles that a solo driver can run.

In the USA, this may mean traveling coast-to-coast (or being on what one of our trucking companies called their “transcontinental” fleet).

Both of the truckers in the team should have a clear understanding of what his or her job responsibilities are.

For example: How many miles should each team driver try to cover during his or her driving shift?

When we teamed, we found that each of us had certain talents.

But you need to know in advance who will be responsible for what.

When Mike was a training engineer, he developed a “mutual expectations” guide so that trainees would know what was required from both trainer and trainee.

This helped relieve the stress of not knowing the “unwritten rules” between the two people.

Splitting Pay or Not?

As referred to above, depending on the trucking company, a truck driver trainer may be paid to do training as well as run as part of a team.

In this case, the trainee is the other part of the team and together they are assigned to move freight as a team.

We personally don’t like this scenario and think that trainers should be paid to train, period.

Aside from this set up, a trucking team may have to split the mileage that a truck gets.

When we were in truck driver training school, we were kidded by our classmates about one trucking company for whom we considered driving.

The way that company worked the pay was that “first seat driver” earned one cent more per mile than the other driver.

“Who” was going to be the first seat driver, they wondered?

If we were equally qualified to drive a truck, why should one of us get more money than the other?

Well, in our case, it didn’t matter because we were going to keep “all that lovely money in the family.”

According to an August 8, 2013, article in Overdrive Online, 31% of those who team agreed that keeping business in the family or teaming with a family member was the biggest attraction to team driving.

But this business of a team driver being forced to split his or her pay with another driver who isn’t pulling his or her weight can be a serious issue.

It can get even more complicated if one driver has more truck driving experience — and would ordinarily be able to earn more cents per mile as a solo — than his/her team member.

All of these pay issues need to be dealt with on the front end so that no one feels cheated or deceived.

Find out how your trucking company will work team driver pay. 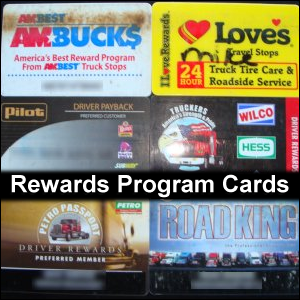 We think it was Trucker Desiree who first brought a matter to our attention.

Evidently, some team driver trainers have required their trainees to use the trainers’ rewards program cards when fueling the team-driven truck.

What this means is that the trainer gets all of the rewards program points to spend as he/she likes, leaving the trainee out of the loop.

This situation sounds patently unfair if the trainee has done his or her part to drive the truck (and use the fuel) in moving freight.

As long as a trainee is qualified to get a rewards program card of his/her own, he/she should be able to earn points on that card whenever he/she fuels the truck on his/her shift. 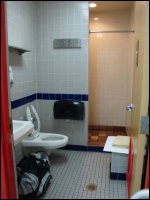 Of particular interest to some female truckers (and even some male truckers) who desire modesty and privacy when showering is the need for separate showers at truck stops.

Husband and wife truck driving teams usually don’t have issues with this.

Similarly, two guys may not be too particular about this nor two women drivers.

But if you are a female trucker trainee, never be afraid to speak up for needing to have a separate shower from a male trainer.

Just because you’re sharing living space in the truck with a man does not mean you need to compromise in this way.

The OTR trucks we’ve been in do not have equal amounts of the same types of storage space on both sides of the truck.

That means that the two team members will need to agree on “how much” room in which storage areas in the truck can be taken with what kinds of personal belongings or packing list items. 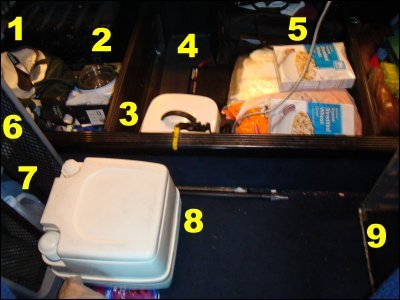 Besides agreeing on truck organization and splitting storage for such things as clothing and job-related gear, there may also need to be an agreement on sharing space in an ice chest, thermoelectric cooler or compact refrigerator.

All leftovers should be eaten or disposed of in a timely manner.

The burden of this should not fall on the shoulders of just one of the team drivers.

Members of trucking teams may wage a “climate war” in their trucks, particularly if they have different internal thermostats.

One trucker may want the truck warmer or cooler than the other.

In such a case, a compromise will have to be made.

If one person is likely to feel cool, the best thing is to prepare in advance by bringing an extra blanket, a jacket, or double socks to keep warm enough.

Mike distinctly remembers a time when he instructed a trainee to bring a certain kind of bedding with him during training.

The trainee did not bring the required blanket and hence needed the truck to be warmer than Mike liked in order to stay warm.

Mike, using a sleeping bag, did not sleep well at least one night because it was too warm in the truck.

He and the trainee had to agree on a temperature that at least approached what both of them wanted.

Personal Habits and Preferences Under the Microscope 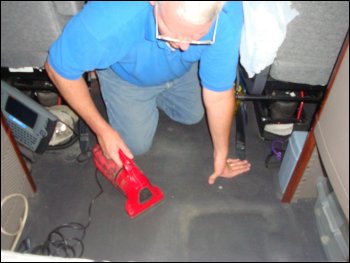 A person’s level of cleanliness is never more evident than when living in tight quarters and having a heavy work schedule.

Every team driver will need to work out which cleaning tasks should be done and how often.

If a trucking team eats in a truck, they will need to decide who cooks and who cleans up afterwards.

Team drivers need to come to agreement regarding smoking.

If one trucker smokes but the other does not, this may or may not become a sticking point.

Some drivers like to listen to certain types of music or radio programming while driving.

They may even engage in conversations on the CB.

Some choices that may be perfectly acceptable to one person may be totally offensive to another.

Before you team up, find out what the other person is used to.

Finally, there is the issue of using potentially shared bathroom facilities.

Except for the time when Mike drove solo for Schneider National (during which he was forbidden from having one in his truck), we always had a portable toilet in our trucks for personal use.

During the time that Mike had trainees with him, he never let them use his in-truck toilet.

They were free to stop at rest areas or truck stops to use the bathroom. 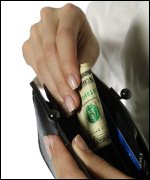 If you’re going to get good, deep, restorative sleep during your sleeper berth break, you won’t be sleeping with “one eye open” to make sure that your team driver isn’t taking what is yours.

There needs to be an agreement about what is “off limits” in a truck (like touching or going through the other driver’s wallet or purse without his/her permission).

Nothing kills the spirit of running as a team when one team member feels taken advantage of, lied to or stolen from.

Make sure that all “boundaries” are clearly established ahead of time.

For female trucker trainees, there should never be any question about performing certain “favors” for male trainers, even if they have been told that they will need to perform in order to pass training.

If you have been “hit on” in this way, report this trainer to your company immediately.

There are laws on the books (at least in the USA) regarding sexual harassment.

One of the biggest issues affecting team drivers is getting good sleep in a moving truck.

Standard-issue mattresses in truck sleeper berths are not known for being really comfortable.

The internal springs may make it difficult for some folks to sleep while the truck is moving.

Too sleepy to drive? Have your #TeamDriver take over! #trucking [URL no longer working}

because both team drivers need to get good sleep during their individual sleeper berth shifts.

Even though there are ways to sleep better as a trucker, if you are a light sleeper, we do not recommend that you attempt team trucking.

Money saving tip: While you can save a lot of money by not eating out, it can be difficult to cook some foods in a truck that is moving down the road.

Boiling water may be particularly dangerous when the truck is moving.

However, there are lots of dishes that truckers can prepare that do not need this.

Some meals can be heated in a hot pot or microwave oven.

By stopping the truck only for eating, bathroom breaks, fueling, getting loaded and unloaded, and doing other required tasks, a team can maximize the number of miles the truck can roll each day.

To help maximize rolling time, you may need to work out who prepares meals while the other team driver drives.

If you are having difficulty in getting along with your team driver, try talking with him/her to iron out differences.

If the differences are too large, you may need to team up with someone else.

Some drivers find that they like their privacy — or sleeping in a non-moving bed at night — so well that team driving or even training truck driver trainees is not right for them.

There is nothing wrong with reverting to driving solo.

Team truckers may or may not get paid any better individually than they would as solo drivers.

Run the calculations for yourself to verify this.

See if the trucking company that you want to drive for has a guaranteed number of miles that teams will run each week.

If you are determined to run as part of a team, work for a trucking company that specializes in team freight.

Then, among those find one that has freight that runs along traffic lanes you prefer.

Have you found a trucking company that seems to pay teams a higher pay rate per mile or an astronomical team sign-on bonus?

Read the fine print to know what “extra” things you’ll be responsible for or to which you are committing yourself.

Do not be caught unaware or allow yourself to be exploited.

Return from A Team Driver Guide: Before You Become Part of a Trucking Team to our Truck Driving Jobs page or our Truck Drivers Money Saving Tips home page.

Epes Transport System: A Review by a Professional Truck Driver