Your livelihood as a trucker stops if you are forced to retire from trucking against your will — or before you are ready to leave the industry. 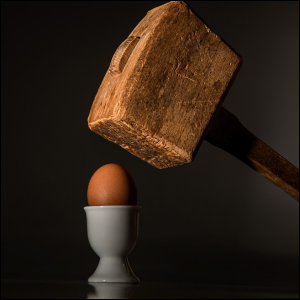 Retiring from trucking isn’t the kind of “early retirement” option that some companies offer, which may come complete with severance packages or attractive retirement benefits packages.

Rather, sometimes getting out of trucking comes suddenly and without warning.

We will address the factors that may cause forced retirement among truckers on this page.

Physical Demands as a Truck Driver

Being Forced to Retire by Your Body

Anyone who has been in the trucking industry any length of time knows that driving a truck is hard on the human body.

It is a physically taxing occupation in which some trucking jobs requiring more exertion than others.

When we drove coast-to-coast and when Mike drove regionally, we mostly hauled dry vans.

Beside occasionally wrestling with a landing gear, the most physical effort we usually expended consisted of opening and closing trailer doors.

Since most of our freight was “drop and hook,” we rarely lumped our own loads.

When Mike was working in a local truck driving job hauling a flatbed, he had to strap his loads every day (sometimes multiple times a day) and tarp his loads (cover them with a tarp) when required.

Working a job like this is much more physically demanding than hauling a dry van.

Because of its physical demands, you might voluntarily leave trucking to keep from expending this amount of physical effort.

Being Forced to Retire by Injury

Then again, you could face an on-the-job injury that keeps you from ever driving professionally again.A trucker co-worker of Mike’s was occasionally heard saying that he was “getting too old” to keep doing that physically demanding work.

Then came the day when he fell off his truck. (Ouch!)

As of the time that Mike left that trucking company, none of the folks at Mike’s location knew if this co-worker would ever return to work based on the extent of his injury.

Being Forced to Retire Based on Age

Allen Smith (AskTheTrucker.com) wrote about the aging pool of truck drivers and a movement to force professional truck drivers to quit driving by age 65.

The Owner-Operators Independent Drivers Association (OOIDA) lists some research on their website:

Furthermore, OOIDA states, “Most independent drivers plan on retiring at 67 years of age with the largest majority of them expecting social security to pay for their retirement.”

So, they have no separate retirement plan, huh?

Separately, we address the issue of truckers in the USA depending on Social Security in their retirement years.

Being Forced to Retire Through Regulation

Many truckers face increasing difficulty staying in the industry because of increasing regulations.

We will address three of them:

As you may know, the CSA BASICs cover: Unsafe Driving, Hours-of-Service (HOS) Compliance, Driver Fitness, Controlled Substances/Alcohol, Vehicle Maintenance, Hazardous Materials (HM) Compliance, and Crash Indicator.(1)You can be the safest trucker in the world and have all of your paperwork exactly right all the time and still be forced to retire from trucking because of issues with your truck.Allen Smith also wrote in January 2010 (emphases preserved):

As a follow up from our previous post: CSA2010 and DAC report to cause more lost jobs for American truckers, violations by drivers and carriers will be taken by SafeStat and stored in a DataBase. This information is from the D.O.T roadside inspections. Upon its implementation, drivers will receive a score according to a three year look back of this information within the DataBase. If their total point score is at the maximum level, current drivers and companies could immediately be in violation and placed out of service and/or terminated.

This is why the FMCSA, itself, has projected that 175,000 drivers could lose their jobs as soon as CSA2010 is implemented. Furthermore, they project that 47.9% of the U. S. trucking companies could fail.

What if you get terminated from one trucking company because of CSA points? Do you think you can get hired by another? Allen responded to a question by saying, “… Drivers with many points will not be a desirable carrier hire either. …”

So the level of your CSA points may directly affect how “hirable” you are as a trucker.

If you love trucking and you’re planning to retire as a trucker, you sure wouldn’t be happy if you got “pointed out” of the industry because of CSA violations.

There has been a crack down on trucker obesity, neck size and sleep apnea. Allen Smith (AskTheTrucker.com) addressed some of these issues in 2009.
askthetrucker.com/will-sleep-apnea-test-be-new-regulation-for-trucking (no longer online)

This regulation doesn’t affect the trucker as much as the truck he/she drives.A 2010 article cited a cost for upgrading a truck for emissions compliance as ranging from $3,000 to $20,000 per truck.(2)According to one article:

Randy McLaughlin, owner of Old Durham Wood, an orchard removal specialist, says he’s already let go of two workers and retired two trucks that weren’t in compliance with standards that went into effect last week. He says, “Two of my trucks have been taken out of service in order for me to stay in compliance.” He adds that when the next round of even more strict standards are rolled out in 2014, more small business owners won’t be able to afford to keep up. He says, “When those deadlines pass, those single truck owners will be out of business.”(3)

Not only are there up-front costs to comply with new emissions regulations, but there are ongoing costs, too.

According to this March 2012 article:

When truckers did switch over to the new technology, reports found the engines to be less reliable and requiring of more maintenance. Moreover, they decreased the fuel economy performance of trucks. Statistics cited in the report found that that amounted to ‘a truck consuming an extra 800 additional gallons of fuel per year, on average.’

Being Forced to Retire Due to Financial Pressures

We’ve already delved into some of the financial pressures that force some truckers to retire early, some of them veteran truck drivers.

Let’s look more closely at others…

The trucking industry in the USA has changed a lot over the decades, some of the changes having made it more difficult to earn money and turn a profit.

The prices of fuel and tires are high.

In case you wondered about the price of diesel, you may review the history of Weekly U.S. No 2 Diesel Retail Prices (Dollars per Gallon) from March 1994 to present.

Many trucking companies went out of business during a recent recession.

According to an article about the 2008 recession:

A total of 785 trucking companies with a combined fleet of about 39,000 trucks went out of business in the third quarter, bringing the number of company trucks idled in the first nine months of 2008 to more than 127,000, or 6.5 percent of the industry, reported Donald Broughton, trucking analyst and managing director of Avondale Partners.

Todd Spencer, executive vice president of the Owner-Operator Independent Drivers Association, estimates that the industry probably lost work for about 100,000 drivers in the first half of 2008 when diesel prices were at record highs.

Some drivers chose to park their trucks when fuel prices were too high.(4)

Theoretically, they could do it again.

Although a lot of truckers lost their jobs, it is speculative as to whether they felt that they were “forced to retire.”

Did they go back to work when the recession eased?

Or when circumstances arose to “force truckers out,” did they stay out?

When Paychecks Come to a Screeching Halt

All of the factors listed above are very real and can have a devastating effect on any trucker — especially owner-operators.

Just because paychecks stop does not mean that a trucker has been forced to retire.

Some truckers recover from on-the-job injuries.

Previously, we asked the question about what would happen if your paycheck stopped.

You may be able to rely on your emergency fund, but for how long?

How long would you be able to stay afloat financially?

Hopefully, you have already designed a budget and are living according to your spending guide.

In order to be safe, you will need to factor in such things as inflation and the decline in the purchasing power of the dollar.

If necessary, you may need to have a second income outside the trucking industry from which you cannot be forced to retire.

Money saving tip: We urge professional truck drivers to keep abreast of all of the regulations (even the Hours of Service regulation changes coming into effect in 2013) so as not to receive CSA points.

Do thorough pre-trip inspections in order to reduce the possibility of vehicle-related CSA points being assessed against you.

Do not attract inspections by having a dirty truck. You can wash your truck yourself if necessary and if you have the right tools.

Ask yourself this question that we have prefaced with a metaphor:

In football, when a team is out of “downs,” a standard practice is to punt the ball to the other team. If you were put in a similar situation in trucking — where you were forced to retire before you had planned to retire — what would your “fall back” plan be?

Return from Forced to Retire from Trucking and Truck Driving to our Budgeting page or our Truck Drivers Money Saving Tips home page.

Ice Vending Machines for Bagged or Bulk Ice for Truckers