On what will you depend in retirement?

These are just some of the questions that you will need to answer for yourself so that you aren’t caught off-guard or by surprise after your earning years end.

We address on this page why it is critical that you look ahead and make some effort to provide for your later years.

Why Address the Future of Social Security?

Elsewhere, we addressed the issue of being forced to retire from trucking for various reasons.

So is this sobering reality: “If you fail to plan, you plan to fail.”

We don’t want for you to fail.

That’s why also address the issue of truckers planning to retire from trucking.

Is retirement planning something truckers need to be concerned about?

The Owner-Operators Independent Drivers Association (OOIDA) lists some research on their website:

Furthermore, OOIDA states, “Most independent drivers plan on retiring at 67 years of age with the largest majority of them expecting social security to pay for their retirement.”

Assuming an average retirement age of 65, having no retirement plan at age 50 gives truckers only 15 years left to plan for it.

You know what “reaction time” is in driving a big truck, right?

Similarly, it is better to know the truth now about the future of Social Security and have time to react to it than to be left without options.

That’s why we have researched this issue and compiled the information on this page.

So without further ado…

The Future of Social Security, an Entitlement Program 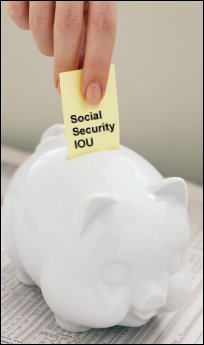 Social Security has been classified as an “entitlement program.”

If that rubs you the wrong way, consider what HowStuffWorks.com wrote about there being no “account” with the Social Security money taken from your paychecks to pay you upon your retirement:

Even if there was an “account” with your Social Security money in it, here’s what Bankrate.com wrote in January 2011 (emphasis added):

No matter how much you pay into the system, whether you earn the average wage over a lifetime ($43,100 in 2010 dollars) or if you’re in a two-income household where one earns a high wage and the other earns an average wage, you get back substantially more than you pay in.

That is why some people have called it a Ponzi scheme.

Is the Future of Social Security Sustainable?

A huge problem with the devised system is that the number of workers supporting those who receive funds is decreasing.

The former ThinkQuest once wrote this(1):

Conceivably, the future of Social Security could be in danger one day from too few supporters of the system.

Citing the 2011 Annual Report by the Social Security Board of Trustees, Wikipedia further says,

By 2035, the ratio of potential retirees to working age persons will be 37 percent — there will be less than three potential income earners for every retiree in the population. At this rate the Social Security Trust Fund would be exhausted by 2036.

Over time, different people have cited different dates by which time Social Security funds will dry up.

Politics being what they are, taxes and benefits can change drastically.

For that reason, the future of Social Security is subject to change.

If a crutch is “A device used for assistance or support” — or describes this action, “To support on or as if on crutches; prop up” — then Social Security can indeed be looked upon as a crutch for those who require it in their retirement years.

What happens if the crutch breaks?

The Future of Social Security and All Other Entitlement Programs

The U.S. federal government has taken on more and more debt, as shown in chart form from these resources by the Federal Reserve Bank of St. Louis (FRED):

Furthermore, lawmakers have increased the U.S. debt ceiling many times.

As important as it may be to know the total debt and the debt ceiling, what about all of the “unfunded liabilities”?

Updated on June 24 2022, a snapshot view of a report on TruthInAccounting.org showed that:

Based on these numbers, some economists have predicted that either hard times or an outright economic collapse is coming to the USA.

In such a situation, you can kiss good-bye the future of Social Security as it concerns cushioning your retirement years.

Back in 2007, when he served as Comptroller General of the United States (the nation’s top accountant), David Walker talked about a looming fiscal crisis for the USA.

In other videos available online, he went into some detail specifically regarding Social Security: Part 1, Part 2, Part 3, Part 4.

This information from FRED shows that the payout on Social Security has gone up and up.

Will Social Security run out?

There is no doubt (unless there is direct intervention) that total Social Security payments will continue to increase as more and more “baby boomers” retire.

But working class people will accept higher taxes to pay for this only so long.

How Many People Depend on Social Security?

A shocking 46.1 percent of Americans die with less than $10,000 to their names and rely on Social Security benefits to pay the bills, according to a recent study by James Poterba at MIT, Steven Venti at Dartmouth and David Wise at Harvard.

These statistics are alarming because elderly people often have among the highest medical expenses and are ill-equipped to pay bills, the authors wrote… 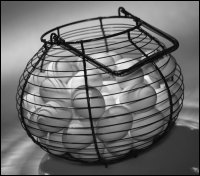 Are you familiar with the meaning of this word picture: putting “all one’s eggs in one basket”?

It means to devote all of one’s resources to one thing.

What would it be like if you trusted that Social Security will be there for you when you retire — and would be your sole (or even main) source of income during those years — and then it wasn’t?

Wouldn’t that be horrible?

There is a complicated formula for calculating Social Security benefits.

If you want specifics for you, try this estimator.

Given the trend that the U.S. federal government has been on in recent years, it is highly unlikely that payouts on entitlement programs can continue to increase indefinitely.

That is clearly not sustainable.

If you plan to retire comfortably and you have not already done so, it is time to do some serious planning for your retirement.

It is best to be privately prepared and not depend on Social Security to fund your retirement. Furthermore, it is best to diversify your investments if you can so that if one fails, you have others to rely upon.

Money saving tip: For your own benefit, research the well-being of those who depend upon Social Security to see if that is the kind of lifestyle that you want to have in your retirement years.

If this lifestyle is not what you want for yourself or your home support team, plan now — or re-evaluate your plan — for retirement.

Make calculations to see if your investments will provide what you need throughout your retirement.

Thoroughly research every investment opportunity and retirement plan that interests you. Consider what will happen if one or more fails.

We recommend having a second income source that will continue to come in once you retire from trucking.

Return from The Future of Social Security: Considerations for Trucker Retirement to our Budgeting page or our Truck Drivers Money Saving Tips home page.

Save on Hotels for Truckers: Truck-Friendly Hotels and Motels

Why Do Polarized Sun Glasses Work Well as Sunglasses for Truckers?