The photos below show three-pound “chubs” of two different “types” of hamburger meat for sale in a grocery store:

In order to tell which is the better monetary value for the money (assuming the quality is the same), we have to do some math. This involves finding out how much useable meat is in the wrapping. To do this, we first multiply the weight of the chub by the percentage of meat (excluding the fat), then divide the weight into the price to get the price per pound of useable meat. 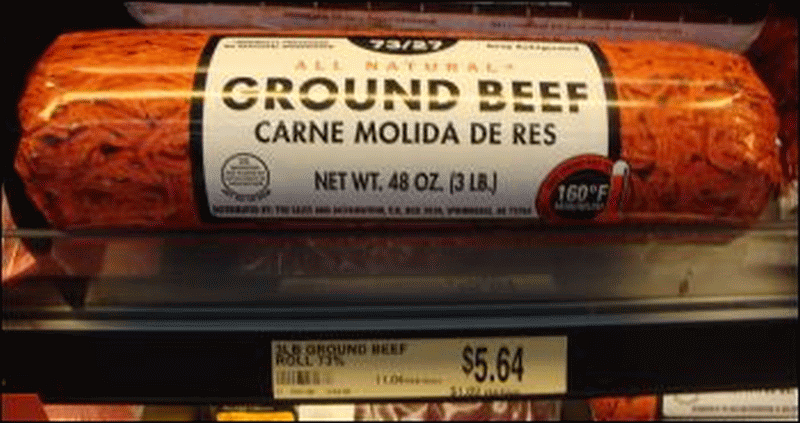 As you can see from these calculations, at the prices that these two types of meat were being sold for, the ground chuck was more expensive per pound. However, there is obviously less fat — grease, when cooked — to have to dispose of.

There may be other factors besides monetary value involved in your decision, such as taste. Mike has said that he likes two things about the ground chuck better: the taste and there being less grease to dispose of. Furthermore, how many meals can you make from the beef in just one package?

We used to buy 5-pound chubs of ground beef and cook it up all at once in a larger electric skillet. However, since we use a different, smaller electric skillet in the truck and the room we have to store the meat in Mike’s truck is less than we would have in a home refrigerator, we backed down to cooking up a 3-pound chub.

Mike usually divides each chub into a quantity of hamburger patties (most often 9, which gives us 3 sets of 3, from which he eats two and Vicki eats one) and then cooks the rest as “crumbles.”

See What You’re Buying and Utilization

One of the big drawbacks to buying meat in non-see-through packages is (duh!) that you can’t see it. You just trust that the meat is good. Other selections of freshly-ground beef are packaged with see-through plastic wrap. It can be even more expensive per pound.

In October 2010, we bought a package of 80/20 hamburger meat on a tray with a see-through wrapper. From about 3.3 pounds, Vicki made 12 “burger shots” (smaller than the size burgers we are used to making) and browned the rest as crumbles. Vicki quipped that the burger shots actually looked like flattened meatballs!

Making burger shots can be a double-edged sword: while they can assist with portion control, someone may not feel he/she is getting a “full burger’s worth” and might easily eat more.

Variety is the Spice of Life

When it comes to making meals with hamburger meat, the sky is the limit. Here are a few of our favorite dishes:

As you can see, the possibilities are plentiful when cooking up hamburger meat.

The second and third dishes are prepared exactly the same with cream of mushroom soup, milk, mushrooms — except that the physical appearance of the meat is different. With the stroganoff only, Mike adds in a bit of sour cream. With both, he adds in a bit of salt, pepper and garlic powder to taste.

Mike fixes potatoes to go with hamburger steak and either buttered boiled pasta (like egg noodles or rotini) or rice to go with stroganoff. Mike is partial to using rotini (little spirals) because the mushroom sauce can fill the gaps in the pasta.

For sloppy joes, all you need to add to the meat is a can of Manwich or appropriately sized batch of homemade sloppy joe sauce.

Making crumbles take on a taco taste is as easy as adding appropriate spices and seasonings.

Vicki has made a homemade taco seasoning mix based on the recipe from The Tightwad Gazette.

One thing you need to be aware of is the strength or potency of your chili powder.

When you buy yours, determine if you need straight chili powder or one with other ingredients.

Those other ingredients do make a difference!

For beefaroni, Mike mixes with the meat canned tomatoes, tomato sauce, water and spices before the uncooked elbow macaroni is added, the mixture brought to a boil, and the macaroni allowed to absorb the tomatoey taste until done.

We’re not sure why but tomato-based dishes like spaghetti and beefaroni usually taste better to us as leftovers.

How to Cook It

For us, the easiest way to cook hamburger in a truck is in an electric skillet plugged into a battery-connected inverter. (Of course, the inverter is able to power the skillet or handle the number of watts that the skillet pulls.) 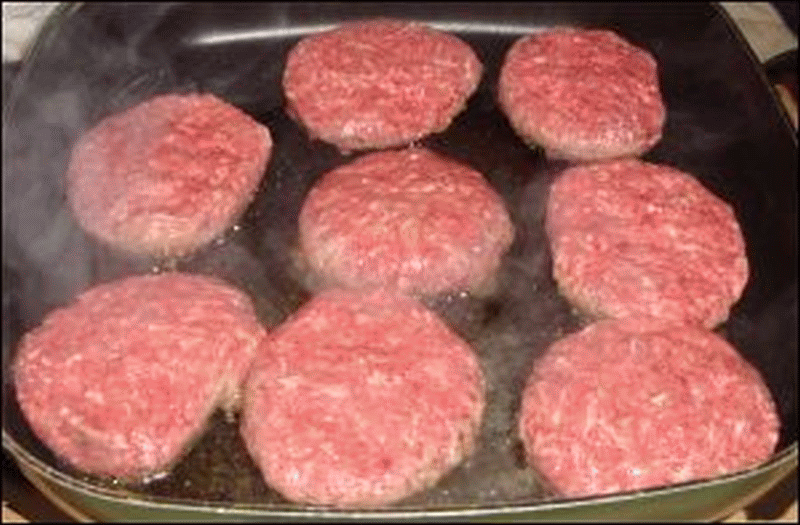 This is a photo of 8 hamburgers being cooked in an electric skillet in Mike’s truck. 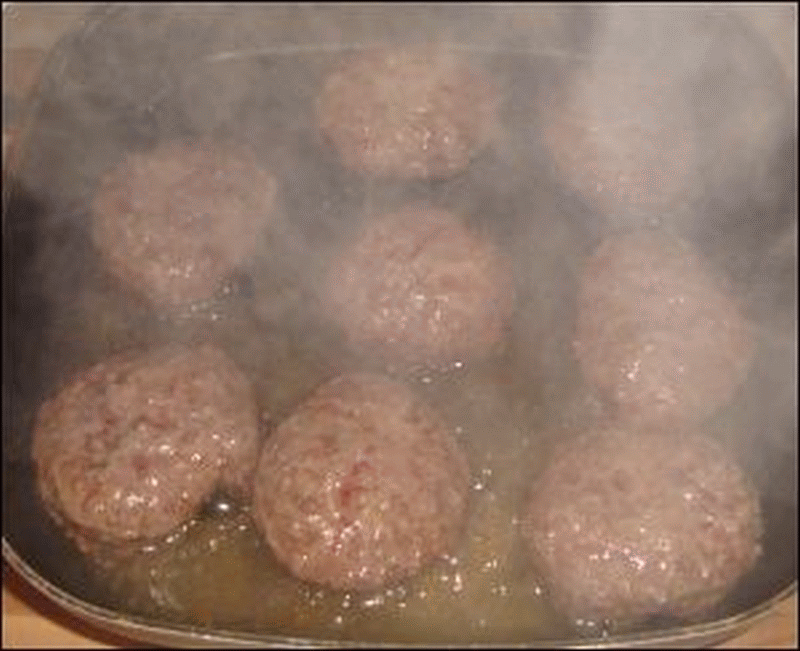 These hamburgers are nearly fully cooked. See the steam rising? It sure did smell good in the truck while these were cooking!

Besides the powered electric skillet, we need a pancake turner or spatula to turn the meat as it cooks, a large non-meltable spoon to dip off the grease, and two non-meltable bowls (one for the grease that is dipped off and one for the cooked meat). Mike prefers to dip off grease into a metal bowl. If you do this, just be sure not to burn yourself.

What About the Grease?

We deal with the grease from cooking up hamburger meat this way: When a sufficient quantity has accumulated in the skillet, Mike dips it off with a large spoon into a bowl that won’t melt. When we’re ready to clean up, he puts the grease (which has probably started to congeal) back into the electric skillet and mixes in sufficient blue Dawn dishwashing liquid to emulsify it before adding in either water or ice cubes to make it flow better before it is dumped into our portable toilet. (You never want to pour boiling hot grease into something plastic that could melt.)

Using the Meat in Dishes

We rewarm burgers with a dab of water in either our electric skillet or hot pot.

Other cooking alternatives are baking/boiling in a crock pot or broiling under the cooking element of a toaster oven. 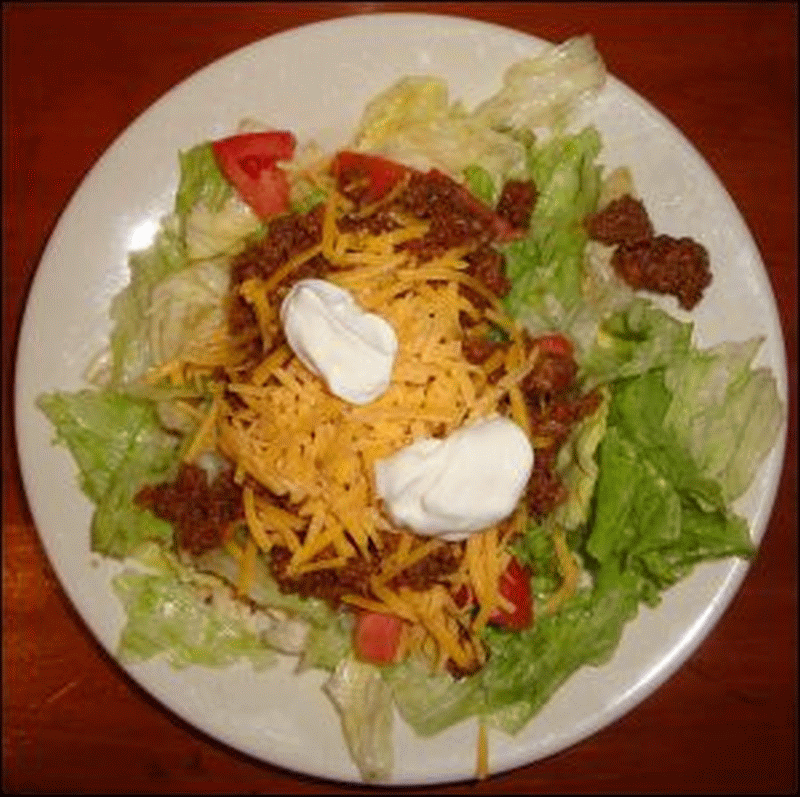 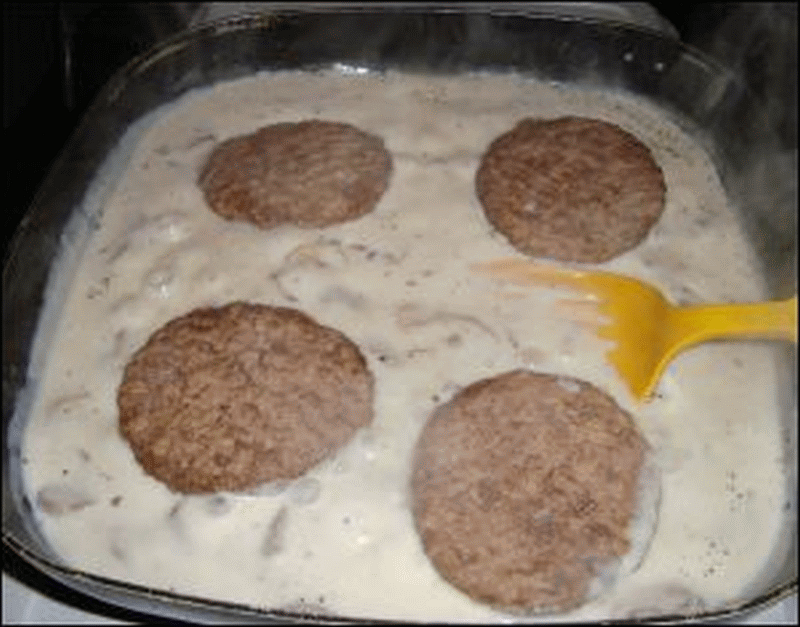 These four hamburgers (previously cooked) were placed into a mushroom soup sauce of cream of mushroom soup, mushrooms, milk and spices to taste — to make hamburger steak with mushroom gravy.

Once the burgers were warmed up and thoroughly coated with the sauce, we were ready to eat.

Not All Hamburger Is the Same Nutritionally

Just as we have stated above, not all hamburger is the same. You may wish to explore the nutritional differences between different types on NutritionData.com.

Furthermore, you can greatly increase the number of calories consumed by eating more meat, adding condiments or eating the meat with other side items. Consider this side-by-side contrast:

A variety of pre-formed burgers are available for sale. You will want to read the list of ingredients to make sure that you aren’t getting a lot of by-products. We have tried one lower-priced brand of pre-made hamburgers that contains other ingredients and been very disappointed. If you choose not to make your own burgers (even with a press), just look for a variety that is “100% beef.”

Money saving tip: Mike’s mom used to say that it is amazing what you can do with a pound of ground beef and a can of mushroom soup. The information on this page shows that.

When it comes to hamburger meat, do you want to patty, ball or crumble it? It’s amazing how versatile this meat is.

Vicki carries a small calculator with her (to do the math shown above) to see which kind of ground beef or ground chuck is the best value. It is possible that a more expensive selection of meat will be a better value to you because you may have less grease to dispose of.

Never dispose of grease in unapproved locations (such as down the hill behind your truck at a truck stop) lest you receive a fine for unauthorized dumping. Not only that, but the smell can attract all sorts of undesirable creatures that you may not want around your truck.

According to Wikipedia, “Portion control is understanding how much a serving size is and how many calories a serving contains. Portion control is important for weight management as the weight is defined by the total calorie intake.” Even though you may be “starved” when you cook up your meat, we encourage you to think about portion control for the sake of your health. When you buy the package and divide it up for cooking, think in terms of the number of meals you can get out of it — especially if you want to stretch your dollars.

Make sure you store your raw and cooked meat in a device that will keep it at the proper storage temperature. Also, make sure that you cook it properly and thoroughly. Many restaurants are required to cook their burgers so that there is no pink in the middle. We don’t know of anyone who likes beef patties that aren’t cooked all the way through (even though they may like their steaks that way).

If you or your home support team are able to comparison shop between stores for the better price, go for it. Sometimes, meat is discounted if it is a little older; use your own best judgment regarding buying older meat (that is closer to an expiration date).

Use coupons or gift cards to lower the price if you can. Some stores have loyalty programs that allow you to get discounts; if you are signed up to use one at the store where you’re shopping, don’t forget to let the cashier scan your loyalty card.

Some stores may sell larger packages of ground beef for less per pound than smaller packages. When you’re driving a truck, buying in bulk is not often practical. However, it may be practical for a trucker’s home support team to buy, portion and cook in bulk, especially if meals are pre-made. For the ultimate in convenience, entrees made with hamburger meat can be packaged and stored in your freezer until you’re ready to eat them. (Be careful to use them before they spoil or develop freezer burn.)

A way that some people have found to stretch hamburger meat is by adding either ground turkey or texturized vegetable protein (TVP). The texture, taste, nutritional content and cost of these two “stretchers” are something that you may wish to evaluate on your own. Ground beef has a distinct flavor whereas the other two may need to be seasoned to have flavor. Note also that TVP came come in at least two forms: chunk and granules (more like flakes).

Return from Hamburger: Tips on Buying, Preparing and Using the Meat to our Food and Recipes page or our Truck Drivers Money Saving Tips home page.

Repurposing Items for Better Use and Function in Semi Tractors

Microsoft Money Plus for Personal Finances and Money Management