What is a truck driver furlough and what are some things that truckers need to consider before agreeing to one? (*) 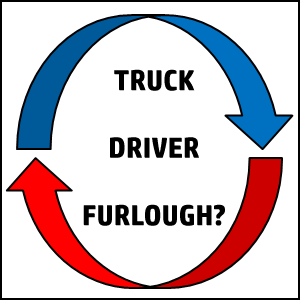 A November 30, 2022, article entitled FedEx Freight to begin driver furloughs Sunday opened up a can of worms.

After all, isn’t there supposed to be a “truck driver shortage” — meaning that there is more freight to haul than there are truckers to haul it?

So why is a trucking company asking truckers not to drive? Hmm…

What Is a Furlough?

Definitions of a furlough vary and are often confused with a layoff.

A furlough is a mandatory temporary leave of absence from which the employee is expected to return to work or to be restored from a reduced work schedule. Furloughs are often used when the employer does not have enough cash for payroll (for example, government shutdowns due to lack of budget approval) or when there is not enough work for all employees during a slow period and, by reducing employee schedules, the employer can avoid terminating employees. …

A layoff is generally considered a separation from employment due to a lack of work available.

A furlough… is a temporary leave of employees due to special needs of a company or employer, which may be due to economic conditions of a specific employer or in society as a whole. These furloughs may be short or long term.

A furlough is an unpaid leave of absence or reduction in hours typically resulting from a lack of work or budget cuts. Such situations are usually only temporary.

So going back to the Freightwaves article, we read:

The voluntary furloughs will run until March 6, with drivers getting a guarantee to return to work, the unit confirmed.

FedEx Freight is offering drivers a $300 weekly incentive to accept a furlough. The total payments will be made when the drivers return to work, according to the FedEx (NYSE: FDX) unit.

So we read that the truck driver furloughs will be voluntary and affect an “undetermined number of drivers.”

OK, so let’s say that a driver goes on furlough on December 4 through March 6 at $300 per week.

Looking at the calendar, that looks like about 13 weeks (about one-quarter of a year).

I researched “how much fedex freight truckers earn per week” and found:

The ZipRecruiter.com article puts the “Fedex Freight Truck Driver Salary” at $60,906, which calculates to be around weekly wages of about $1,171.27 and a percentage at:

Would either of those amounts be enough to keep you hanging around waiting to go back to work with that company?

Also, please look at the comments under that article and understand how easy or difficult it would be to “qualify” for this program.

Two questions that I think must be answered are:

Is A Truck Driver Furlough “Fair”?

Think about the situation of paying some truckers a pittance in order keep them “on the employment rolls” but not cutting them loose to go look for other work at a full rate.

Another aspect of paying employees something for nothing is — in my opinion — a poor way of doing business.

2 Thessalonians 3:10 in the Bible reads:

For even while we were with you, we gave you this command: “If anyone is unwilling to work, he shall not eat.”

Now this isn’t a matter of truck drivers not wanting to work or refusing to work for whatever reason.

But it does set up an expectation down the road of being paid something for nothing.

Furthermore, what about the truckers who are still being paid?

They may get to thinking that here these other truckers are sitting home and entitled to partial pay for doing nothing.

How many miles must they drive a truck professionally — and at how many tasks would they have had to labor — to earn $300 in a week?

Other Questions About A Truck Driver Furlough

Since this issue has been raised in very late December 2022 — during a time when there has been a great deal of inflation — will increased costs of products and services put a strain on your finances?

Even though there is supposedly a guarantee to go back to work at the scheduled end of the furlough, what’s to say that another furlough won’t be offered?

If you have an emergency fund set aside — and you’re considering dipping into that to cover your needs financially — can this situation truly be considered an “emergency”?

During the truck driver furlough, will you be prohibited from looking for other work, even it is strictly supplemental?

Have other non-trucker employees in the company — including higher paid executives — been offered a furlough or been required to accept a cut in pay (and if not, why not)?

From the standpoint of shippers who have a choice as to which company with which they will do business, what will they think of having to pay a perhaps increased rate that covers (in part) truckers sitting at home doing nothing during their furlough?

I’m sure that there are many other questions and concerns that could be raised.

However, in my opinion, something just isn’t right about this situation.

If I was a trucker with this company, I would want to see some kind of proof from the company that they have enough future business lined up to pay truckers a full wage at the end of the truck driver furlough period.

As I look back over not-so-distant history, there have been a number of trucking companies that have had serious financial problems — or have shut down altogether — near the end of a calendar year.

To avoid anything that may seriously be amiss, I would ask for documentation regarding the future before I risk a quarter of a year’s potential labor when I could be gainfully employed elsewhere.

You don’t want to agree to something that may not materialize at the end.

Father God, please grant to every potentially affected truck driver wisdom, knowledge, and understanding about what to do in this situation.

May all that we think, say, and do bring glory and honor to You, our Creator.

In Jesus’ name I pray. Amen.

* Part of the information on this page was originally written in the December 3, 2022, issue of TDMST Weekly Round-Up trucking commentary.

Another related page on our site is: Lack of Freight.

Failure to Obey Police Officer as a Professional Truck Driver

QE3 or Quantitative Easing 3: What Does It Mean for Truckers?

Your Emergency Fund Protects You from Unexpected Expenses, Loss